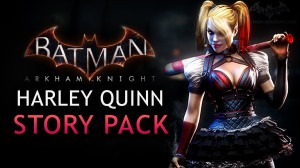 Depending on where you purchased or pre-ordered your copy of Batman: Arkham Knight you may have received two additional story packs: One starring Harley Quinn and the other featuring the Arkham series debut of the Red Hood. While both expansions are a nice bonus for those who simply couldn’t wait to get their hands on an inevitable game of the year edition of the game, neither real add anything to the overall lore of the series and offer nothing really new mechanic wise.

Of the two, the Harley Quinn story expansion is the most important to Batman: Arkham Knight as the story revolves around Harley being sent on a mission from Penguin to break Poison Ivy out of the Bludhaven prison for Scarecrow’s master plan. The Red Hood section takes place at a vague point in the Arkham universe timeline where Red Hood is on a mission to chase Blackmask out of Gotham City.

Whether you’re playing as Red Hood or Harley Quinn, both portions play out exactly the same: Enter a fight, do a predator encounter, enter into another fight and beat an uninspired boss battle. In the case of Red Hood it’s Blackmask, while as Harley you’ll contend with Nightwing. Though neither piece of content is that great, the Red Hood story was by far the most disappointing. He plays more or less like Robin from Batman: Arkham City, only subtracting a shield and batarang for a pair of dual pistols. A new type of enemy will show up in bullet proof vests, but it’s just an indication that you have to take them down silently. Otherwise it’s just business as usual, though I will admit it is a bit unsettling to legitimately kill an enemy as opposed to inadvertently kill them as Batman.

Harley plays very much like any other character in the series, only like Catwoman she doesn’t have a grapnel gun and has to leap from pillars while in predator mode. The Harley story trumps the Red Hood one very marginally in that her story feels more important to the overall game, but it’s still a squandered opportunity given the last time we saw the character in the Arkham City DLC. What also makes this a touch more engaging is Harley’s gadgets and detective vision. Her tools simulate Batman’s: a jack in the box that can be set to explode or laid as a trap as well as confetti snare trap, however they’re very playful and suiting to the character.

While in detective mode, the player gets to see inside Harley’s state of mind with messages like “Mistah J” and “So alone” showing up on the wall and its an interesting visual. Same goes for the indicator for how many enemies you have left to take down, listed as “X Little Piggies”. A new mechanic is an insanity mode where once a meter is built up Harley can rush around and take down enemies with one hit, something that’s very helpful because as you probably guessed, the character is not that subtle in how she chooses to eliminate her opposition. With all these somewhat new additions however, the story is still incredibly short and not that necessary when enjoying the rest of the game.

Free stuff is always great, and for those who did get these add-ons by all means play away. For those who didn’t for some reason and have to pay for them, I would advise waiting for them to go on sale or getting them as part of an ultimate collection somewhere down the road. As a hardcore Arkham fan, I didn’t feel like I was getting anything special within these two pieces of content that I managed to complete in a little under an hour.