When the first Thor film came out in 2011, there were three unique titles released alongside it under the banner Thor: God of Thunder from Sega.  2013’s Thor: The Dark World only saw a free-to-play mobile game release next to it; however a truncated version of the films events were played out in a bonus level within 2016’s Lego Marvel’s Avengers. For the third film in Marvel’s Thor trilogy, Thor: Ragnarok, there’s no talk of any type of dedicated Thor game, mobile or otherwise, but you can relive events of the film and interact with the new characters set to make their big-screen debut through multiple games that are either released or will arrive very shortly.

“We know each other! He’s a friend from work!”

The most talked about and beloved moment from the first teaser for Thor: Ragnarok trailer is when Thor encounters his fellow Avenger, the Incredible Hulk, in a gladiatorial arena. There’s multiple titles you can play to determine who would win in a bout between the Jade Giant and the God of Thunder including both versions of Marvel vs. Capcom 3 and its current-gen follow-up, Marvel vs. Capcom: Infinite. That moment can also be recreated in Ubisoft’s motion/ touch-controlled brawler Marvel Avengers: Battle for Earth and within the Marvel Battlegrounds play set from the sadly defunct Disney Infinity 3.0. Finally players on a budget can pit God against monster in the free-to-play mobile game Marvel Contest of Champions.

Comic book logic dictates that if two heroes go head-to-head, they’ll eventually resolve their differences and team-up to stop a super villain, something that’s already to be expected in Thor: Ragnarok from the films second trailer. A lot of the games in which you can pit Thor and Hulk against one another are also ones in which you put them on a team, including all of the Marvel Vs. Capcom games both characters are in together, Marvel Avengers Battle for Earth and Marvel Battlegrounds. The pair of raging fire and smoldering fire can battle against an army of frost giants summoned by Thor’s chaotic half-brother Loki in the Avengers play set in Disney Infinity 2.0.

Loki was also one of the main antagonists in the first Lego Marvel Super Heroes title, and while there’s no level initially shared by Hulk and Thor, the two can be paired together through the entire campaign via freeplay mode if you wish and also while exploring the New York City hub world; Both Thor and Hulk have also been confirmed for Lego Marvel Super Heroes 2. Neither The Avengers nor Avengers: Age of Ultron received video game adaptations, however both films stories were retold as part of the campaign of the second Lego Marvel game, Lego Marvel’s Avengers. One of the standout levels from the game features Hulk and Thor riding atop a giant Chituari Leviathan that they’re trying to ground.

In Marvel’s free-to-play catalog of games, players can team-up Thor and Hulk in the MMO Marvel Heroes Omega on consoles and PC as well as the mobile action-RPG Marvel Future Fight.

Hulks new look in Thor: Ragnarok is based on the Planet Hulk story that ran from 2006-2007. In it, Marvel’s take on the illuminati: Iron Man, Mr. Fantastic, Black Bolt, Namor, Doctor Strange and Professor X deemed the Hulk too dangerous to exist on earth and put into a motion a plan to send the Hulk to a planet in which he can do no harm. The rocket carrying the Hulk goes off course, stranding Hulk on the planet of Sakaar where he is forced to become a gladiator.

The sequel to Planet Hulk, World War Hulk, was the subject of a pinball table for the Zen Studios’ Zen Pinball and Pinball FX2 platform (and now Pinball FX 3) and either be downloaded on its own or as played as part of Marvel Pinball Epic Collection Volume 1. On the table, Hulk appears in a variation of his gladiator gear.

Hulk will have a gladiator themed outfit in Lego Marvel Super Heroes 2 and the planet of Sakaar is also confirmed to be one of the many worlds you’ll be able to visit when it’s released. A Gladiator Hulk Skin is also available to those who pre-ordered Marvel vs. Capcom: Infinite and to unlock in Marvel Heroes Omega.

The main antagonist in Thor: Ragnarok is Hela, played by Cate Blanchett, who first appeared in Journey into Mystery #102 in 1964. In the comics she is the daughter of Loki from a previous Ragnarok (comics, folks!) who is given the role of Goddess of Death by Odin and given the kingdoms of Hel and Niflheim to rule over. The only game released to date in which Thor can do battle with Hela is in the Nintendo DS version of Thor: God of Thunder where she appears as a boss at the conclusion of the game’s fourth chapter that takes place in the realm of Hel. 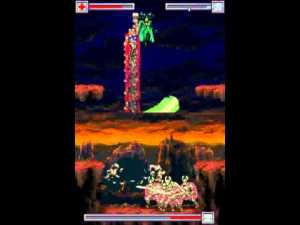 The character who is seen capturing Thor in Ragnarok’s first trailer but becomes his ally by the second is Valkyrie, played by Tessa Thompson. Debuting in The Avengers #83 in 1970, Valkyrie has a fairly complicated history involving the character’s spirit inhabiting multiple human hosts. Essentially she’s a strong willed female warrior appointed by Odin to lead the Valkyrior, basically an army of others like herself, to guide deceased warriors to Valhalla.

Valkyrie’s first appearance was as an NPC in the first Marvel Ultimate Alliance within the Asgard safe zone where she tasks you with locating her missing sword, Dragonfang. Completing this side-mission ads an extra part to the game’s epilogue that tells you that your actions prevented Ragnarok from happening. You can play as Valkyrie in Lego Marvel’s Avengers after you complete her quest line in the Asgard hub world that requires you to find recruits for her Valkyrior army.

“What have you brought today, tell me.”

Jeff Goldblum’s character who is seen running the gladiator arena where Hulk and Thor do battle is the Grandmaster. First appearing in The Avengers #69, the Grandmaster is one of the oldest beings in the Marvel Universe who loves nothing more than to pit people against one another, something that’s fairly evident in the first trailer for Thor: Ragnarok.

Perhaps the best representation of the Grandmaster in a video game is in a title that was only released in Europe: Marvel Super Heroes 3D: The Grandmaster Challenge. Exclusive to both the Wii and PAL regions, Grandmaster Challenge is an interactive board game that also features first-person action sequences. The gimmick for the title was that it could be played in 3-D with traditional red-and-blue 3-D glasses, going as far to come with some themed after characters like Iron Man and Captain America.

Across all regions, the Grandmaster puts Wolverine and Iron Man in a deadly game show that they must escape from in order to reclaim one of the Infinity gems in Marvel Super Hero Squad: The Infinity Gauntlet. Like Valkyrie, Grandmaster can also be unlocked in Lego Marvel’s Avengers in the Wakanda hub world.

The bald, dual machine gun wielding character played by Dredd star Karl Urban in Thor: Ragnarok is Skurge the Executioner or simply the Executioner. Making his first appearance in Journey into Mystery #104, the Executioner is normally seen being the muscle for the woman he’s hopelessly in love with: Amora, the Enchantress, not to be confused with the hula dancing character of the same name from Suicide Squad.

A combined team of Thor and Hulk can do battle with the Executioner where he fights with Amora in the Asgard portion of the first Marvel Ultimate Alliance which is available for download on the PS4, Xbox One and PC.

The giant, fire demon character that Hulk is seen leaping towards at the conclusion of the second Thor: Ragnarok trailer is Surtur. A legendary foe of Thor’s who resides in the realm of Muspelheim, Surtur made his Marvel Comics debut in 1963’s Journey into Mystery #97.

Like Hela, Surtur is a character that you can fight in Thor: God of Thunder, however unlike Hela, Surtur appears in all three unique versions of that game. No matter what version you play though, Surtur always appears to challenge Thor on his home turf of Muspelheim. In order to fight Surtur as the Hulk, or as Hulk paired with Thor, it can be done in the free-to-play MMO Marvel Heroes Omega in the Muspelheim raid.

One of the last places in which Surtur can be fought is with balls and paddles in the Thor themed table for Zen Pinball 2, Pinball FX 2  and now Pinball FX 3 which is found within the Marvel: Vengeance and Virtue pack. Completing certain conditions on the table will summon Surtur and he and Thor will do battle while you continue trying to rack up a new high score.

One thought on “PLAYING THE MOMENTS AND AS THE CHARACTERS FROM THOR: RAGNAROK”