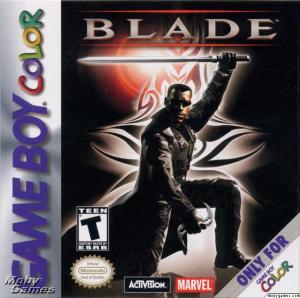 Let’s start things off by talking about the people who made Blade for the Game Boy Color, Hal Corporation. Primarily they are known for making a game featuring this character…

So to clarify, the people who made THAT, made a game based on an IP that features THIS…

Blade GBC is primarily a side-scrolling beat-em-up similar to Double Dragon. The character even moves like the Lee brothers and has a spin kick that looks like it was ripped right from Double Dragon II. You move from right to left, taking out enemies until the game lets you clear to the next room or floor. Within levels you can enter rooms that sometimes reveal hidden items that unlock secret levels. The  A button is the block button in these stages and B is for attack and it can be modified with either up or down to perform an uppercut or spin kick respectively. These levels are timed, but you never come close to running out.

The second style of level is the shooting stages. The game actually starts off in one of these and I honestly had no idea what I was doing at first as I don’t have the instruction manual for the game. What I eventually figured out is that you shoot enemies in the background and the projectiles they throw at you with the A button and you switch to enemies to the direct left and right of you with B button. In the more hectic stages later on it gets a bit difficult to figure out if a bomb is coming from the background or from the side and this can lead to some cheap hits. 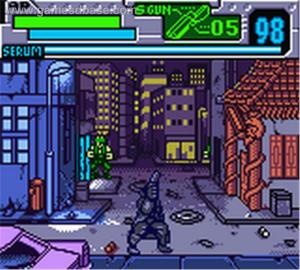 The final style of level is handled in the boss areas. Here you go one on one with an enemy with your sword and these work similar to the beat-em-up stages minus the up and down modifiers. You do have a dash attack that comes quite in handy by hitting forward, forward and then B. The main tactic for defeating all of the bosses is rushing in with a dash attack and then hitting B until they don’t get up. Should they break away, it’s a simple matter of rushing them and getting them back into this pattern.

Outside of the first level, you can tackle any stage you want but you have to keep in mind of the stages level number. If you want to play the game with a gradual difficulty curve, you ideally play the stages in order of level. If however you want to challenge yourself, you can tackle the higher level stages first and make the lower level stages more difficult. In between levels you are given the chance to spend points earned based on performance to aid in completing the game. These areas include your sword and fisticuffs, as well as your health and other areas.

Blade GBC is a short game (I finished it in an afternoon) but a pretty fun game once you figure out the games quirks. It’s not that expensive to buy online for anyone who wants to give it a shot.