When can a bad game be great? It’s an interesting conundrum, yet it happens from time to time. Despite having multiple qualities that makes your brain scream “why are you playing this?!!” you somehow find yourself endeared to a beautiful train wreck. I’m bringing this up because Judge Dredd: Dredd Vs. Death is a bad game: it has graphics that possibly could have been handled on the PSOne, hilarious cartoon-y looking characters models, brain dead A.I and confusing level design…and yet it’s still a helluva fun package with a lot of content that didn’t cost a lot when it was new and shouldn’t set you back much coin now.

The Dark Judges led by Judge Death have escaped confinement and raised an army of monsters including zombies and vampires to judge the ultimate crime: Life. It’s up to you as the title character to stop the plans of the Dark Judges and restore order to Mega City One. The plot is admittedly not the most compelling story ever told, however it does a good job of tying the various levels in Dredd Vs. Death together and gives the player a tour through the world of Judge Dredd. For someone like me who didn’t  grow up with this character, I actually learned a lot about the world as I ventured through the hall of justice and the Resyk facility.

Dredd Vs. Death plays out as a first-person shooter and it fits the character like a glove just as mush as the PSOne light gun game, the exception being that this game is actually worth playing. The Lawgiver, the primary weapon of a Judge, is your main weapon and comes complete with a plethora of firing options including high ex, ricochet and armor-piercing among others, simply cycled through by hitting left and right on the D-Pad. You do pick up a few other weapons, like an extremely helpful shotgun and a long-range laser sniper rifle, though the Lawgiver will be your friend throughout the short campaign.

Seeing as there are, and were, a metric tonne of FPS’s on the market it’s a shame that developer Evoled didn’t simply chain you to just main Lawmaker weapon and exclude other firearms as it is the swiss-army knife of side arms. Playing on normal I found using the main burst fire sufficient for taking out most enemies, with the shotgun also coming in handy for monster type enemies that get up close and rush you. Switching through the various ammo types is also really slow and it seems to take a while to register what type you’re on.

The majority of the opposition in Dredd Vs. Death are vampires and zombies that run at you with little to no regard for their well-being, but they’re a lot of fun to take out nonetheless. Circle strafing around and unloading bullets give this game a classic, frantic feel that’s refreshing today given a lot of modern games in this genre involve a lot of stopping and waiting for your shield to recharge, which is a mechanic here as well but honestly I didn’t even notice until half way to completion. There’s more “intelligent” opposition that will come at you with firearms, though they’re just as smart as the zombies and only come in the same few recycled character models. It would’ve been nice, and maybe something to consider for a Judge Dredd game in the future, if foes could be indicated as an armored type for example that would warrant the use of that ammo type, I bring this type up as I don’t recall every having to pierce a single shred of armor.

Perhaps worse than the artifically stupid enemies are your dim A.I partners or citizens you’ll have to escort. Several missions task you with escorting NPC’s to safety or defending a Judge while you get to a landing zone, and you’ll be smart to keep an eye on them to make sure they’re not caught on a piece of scenery or running head first into a brain hungry zombie. This all being said, I never found myself losing much progress or repeating missions over and over because the game dictated I had to play babysitter every once in a while.

This game was sold and marketed as a budget title, which you can probably tell by the lackluster graphics. Dredd’s character model is excellently exaggerated with his perfectly chiseled square chin and complimentary scowl, but the environments leave a lot to be desired. Yes, the world of Mega City One is not supposed to be a pretty one, but the textures are muddy with no attention to detail and feel like an Nintendo 64 game, though they do offer a decent amount of variety like the Mega City One Mall, the Smokeatorium and the barren Deadworld. The levels themselves are also very poorly laid out and will lead to a lot of running wondering where you supposed to go or if that crate you just passed was the same one you encountered earlier in that level. You have no map to reference, only a vague objective marker that offers little in the way of guidance. 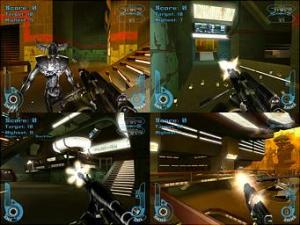 A great way to help you navigate any level is with the help of a friend, and Dredd Vs. Death is one of the great games that lets you bring a friend along the ride for some split screen action throughout the entire campaign, something that helps make any game of questionable quality better. Beating the main story, whether solo or with a fellow Judge, unlocks a plethora of extra content, including characters and stages, for the rather extensive arcade and versus multiplayer modes. The types range from your traditional capture the flag and survival modes, to a personal favorite of mine “Runner” where one opponent is weaponless and must avoid being killed with your opponents being the hunters are tasked with doing the exact opposite. If you’ve got enough controllers and friends who have fond memories of playing games like Goldeneye, this is a game you may want to look into for some decent local multi-player carnage.

It’s easy to be critical of Judge Dredd: Dredd Vs. Death for its short-comings compared to other games released around the same time, but doing so is like dismissing Sharknado 2 because its visual effects are nowhere near as good as Guardians of the Galaxy. This was meant to be enjoyed as budget title and if you can get yourself in that mindset, there’s an awful lot of fun contained within this package, more so if you have a like-minded partner along for the ride. As far as Judge Dredd games go, this is probably the best I’ve come across and you can tell that the developer had a lot of fun playing around in this world. If after seeing Dredd in either theaters or home video and thought “Man, I’d love to play a Judge Dredd shooter,” track this down, I promised it won’t disappoint.

CLOSING NOTE: I played this for GameCube, both on that system as well as on a Wii and it ran excellently. You can also pick this up on PC as well as Xbox original. It does work on the Xbox 360, though I do not have that copy so unfortunately cannot speak on how well it runs.