This is a tough one because neither of these games really have what you call outstanding graphics. In replaying Spider-Man (2002) it was pretty astounding to me how good that game still looks after close to thirteen years. I would even go on to say that its aged better than either Spider-Man 2 or 3. The in-game models look pretty good, but the cut-scenes look pretty rough, though they do feature pretty accurate likenesses for Willem Dafoe and Tobey Maguire. You never really once see Peter Parker in The Amazing Spider-Man, which I think was a good decision as they introduced a “playable” Peter Parker in the games sequel which was a terrible idea and they also didn’t get Andrew Garfield to do any voice work, so it would’ve been odd to see his character model with a different voice. The interior levels of either game don’t stand out as anything memorable or exciting as they’re just labs, sewers and subways. Where TASM gets a leg up over the first ever Spider-Man movie game is in its recreation of New York City. You only briefly see the outdoors in short levels that are mostly fights in Spider-Man (2002) but in TASM, you’re free to swing around a pretty nice looking digital creation of the city, so I’ll give the point to TASM.

Spider-Man (2002) was a really good evolution of the PSOne games that came before it, allowing you to do things like continuously web-sling and use the controllers left trigger to modify your four web attacks. Movement however, is one area in which the game feels underdeveloped as when controlled by an analog stick, Spider-Man feels like he was designed to be controlled digitally and can sometimes veer off in a direction you didn’t intend him to go in. Combat also received an upgrade, allowing you to use punches and kicks together and the game included the ability to find new combos within levels, but button mashing is still the best way to deal with most enemies and threats. Neither Spider-Man (2000) nor its sequel tackled stealth, something that was added to this chapter, but its limited to a basic light and dark meter and only is really useful in two sections: one late in the game and a level or two towards the end.

The Amazing Spider-Man is a refinement of over a decades worth of Spider-Man games and the controls and play mechanics are pretty solid. Swinging, though not “realistic” in that you don’t have to anchor your web-line to anything, feels fast and fluid, especially when combined with the time slowing web-rush mechanic where you can zip to areas of interest within reach. The fighting is wholly ripped from the Arkham titles and though I don’t think this is best for Spider-Man, it works just fine, as does the refined stealth mechanics from 2010’s Spider-Man: Shattered Dimensions. Should you wish you can avoid combat completely, except for the bosses, and stick completely to the shadows, webbing enemies to the ceiling or floor and web rushing out of danger should you get seen. There’s no question in this category, TASM is the clear winner.

The Amazing Spider-Man broke a streak from the other Activision Spider-Man movie games by not having any member of the film’s cast supply voices to the game. In their place are some veteran professional voice actors like Nolan North, Steve Blum, and Sam Reigel as the voice of the main character. All do a good job, especially Blum who does a spot on job of imitating Rhys Ifrans from the movie of the same name, but for as good as a job everyone does, you never connect with the characters or walk away feeling like their the best people for the job, especially Reigel as Spider-Man. Spider-Man (2002) was to feature a sound alike until Activision was able to secure Tobey Maguire’s “talents”, a word I use loosely as he sounds very bored in his role. The same can’t be said for the villain of the game, Green Goblin, voiced by Willem Dafoe who always sounds like he’s having fun with the role, just like he did in the movie. For Dafoe alone, I’m giving this one to Spider-Man (2002). 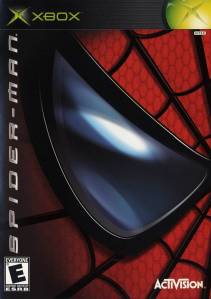 The first Spider-Man movie title is a really short game that can be beaten in one or two sittings. You can play on other difficulties and unlock an interesting mode where you can play as the Green Goblin, but you’re still really only ever playing the same game over again. The Amazing Spider-Man is almost the exact opposite sometimes in that it feels like there’s too much content. Though on the repetitive side, there’s plenty of side-missions to play, seven hundred collectibles to track down, costumes to unlock and in the Wii U version, mini-games where you can play as two of the games villains (Rhino and the LIzard), knock-offs of arcade classics, and one of the greatest extra in any Marvel game where you can play as Stan Lee with spider-powers. Spider-Man (2002) is a good game while it lasts, but it can’t compete with all the content stuffed into The Amazing Spider-Man.

This round turned out to be the exact opposite of the last Spider-Man movie fight where the loser “won” in three categories. Though The Amazing Spider-Man is the clear winner of this contest by a wide margin, both of these games are still worthy playing, especially if you’re a fan of Spider-Man games. Personally I have a lot of nostalgia for Spider-Man (2002) as it’s a game that brings back a lot of fantastic memories, but taking that out of the equation, TASM is the first game to go for if you plan on playing one or both of these titles.