When it launched in the fall of 2004, no one really knew what to think of Ninendo’s latest handheld, dubbed the DS. The touch screen interface, something that’s common today, was unheard of at the time and just around the corner was Sony’s PSP, a portable with near PS2 quality graphics and traditional buttons. 2005 was the year that the DS really started to show what it could do, mainly thanks to great software including Mario Kart DS from Nintendo and Konami’s Castlevania: Dawn of Sorrow. Spider-Man was one of the characters that showed up alongside the launch of the DS with a unique version of Spider-Man 2 developed specifically for the device by Vicarious Visions, a company that would return the wall-crawler to the machine once more in an underrated rendition of 2005’s Ultimate Spider-Man, a game that manages to capture the charm of the console game despite existing on underpowered hardware.

I won’t get into the story of Ultimate Spider-Man because it’s the same as what it is on the console game, the only difference in how the story is presented. As opposed to full-motion video cut-scenes, the story is told through stills taken from the main games videos with all the voice acting still intact. It’s an expected down grade as if the game retained all the videos it would be pretty short, and it’s impressive that Vicarious Visions managed to squeeze the voices into the cart.

Like Spider-Man 2 before it, Ultimate Spider-Man on the DS is not an open-world game, but a 2-D side-scroller and it still manages to capture the bright an colourful look of the console game that expertly emulated the look of a comic book in three-dimensions. In trying to make the game feel as close to 3-D as possible, it adopts the 2.5-D design (a 2-D playing field with 3-D environments) that makes the world feel more alive and dynamic. When swinging around outdoors as Spider-Man for example, he’ll often bank around a corner as opposed to just continuously swinging in a straight line. The design also allows for there to be a lot of depth in the backgrounds like you’re looking down a street for example when outdoors. 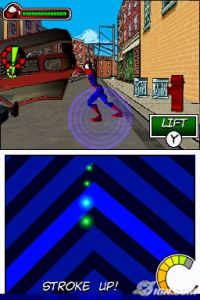 Ultimate Spider-Man features two playable characters, Spider-Man and Venom, and both once again are unique from each other and help to break up the gameplay. Spider-Man is controlled mainly with the face buttons and can jump, punch, kick, swing and climb walls. The touch screen is only used very basically when controlling Spider-Man: swiping the left, right, up and down to save civilians and open doors and pushing buttons on certain consoles. Combat wise it’s only used to pick from a series of super moves that you can unleash when enough power is built up, however I never found any situation where one of the several moves was of benefit over another and just stuck with having one equipped while mainly using my regular punch and kick attacks.

Venom, no pun intended, is a different beast altogether. If you wish you can play as Venom using only the directional pad and one button: the L trigger to jump. Swiping and taping the screen allows him to swipe with his claws, whip enemies with his tentacles and grab items and absorb victims. Controlling Venom in this manner is an interesting experiment and makes him feel more unique to this version, but using the right attack at the right time never feels quite accurate enough. Thankfully you can still use the face buttons for attacking purposes, leaving only grabbing objects to throw at enemies and switches and absorbing enemies to the touch screen.

In almost every way Ultimate Spider-Man feels like a downgrade, still a very fun to play downgrade, from the main console game but one way that it manages to outclass its bigger brother is in its design. As there’s no open-world to speak of, there’s also nothing locked behind city missions and races. This allows the game to keep its pace up much better as you’re not stopping between missions to compete in some races or combat tours. If you’re only interested in playing this game for the story, it’s not a bad investment as it has the exact same story just structured around a different game type.

Missions in Ultimate Spider-Man had you racing through the open-world chasing enemies for the most part before fighting them and because this game doesn’t have that luxury, it had to get a lot more creative with its level design. For the most part things are fun and you’re always moving around from exterior to interior environments like a museum, a prison and a S.H.I.E.L.D facility, but what can be a bit of a drag are the same few stage objectives being repeated over and over again. As Spider-Man you’ll fight some bad guys, save some citizens by swinging them to safety or removing some debris off of them and Venom emphasizes destruction and hitting unreachable switches with his tendrils. Playing as Venom doesn’t feel as fun as Spider-Man here as you get thrown into one too many situations where your health will get knocked down pretty fast, forcing you to replay a huge portion of some pretty big levels.

Boss encounters are frequent but aren’t really that memorable. You’re still going up against the same few members of Spider-Man’s rogues gallery: Shocker, Green Goblin, Electro, Silver Sable, the Beetle and the Rhino. For the most part the best tactic is just running up and hitting someone until their life meter goes down with the only real stand out being The Rhino as you have to not only watch out for his massive frame charging at you, but you can only hit him from the top where he is vulnerable.

MULTIPLAYER: This game does have a multiplayer mode but unfortunately I can’t speak or comment on it as I only have one cart and it requires you having more than one copy of the game to play it.

When it comes to handheld versions of console games, often they’re just dumbed down side-scrollers that barely justify their existence, but in the case of Ultimate Spider-Man, it manages to capture the essence of the game it’s based and present it in an original and fun way. Levels and objectives can sometimes get a little bit repetitive, but the beautiful, colourful art direction make slogging through some of the more tedious levels less of a chore. The touch screen gimmicks with Venom are a decent application of the input specific to the hardware, but at the same time they’re not as accurate as they could be and I’m grateful Vicarious Visions gave the option to stick with the tried and true face buttons. Spider-Man has more games on the DS than any other comic book property, including heavy hitters like Batman and the X-Men. As far as handheld Spider-Man games go, this is of the best that you can get your hands on.