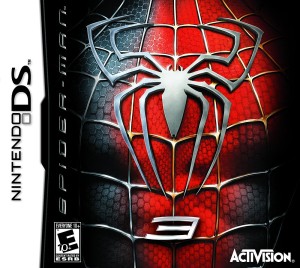 When it came to Spider-Man movie tie-in games, Nintendo handhelds always seemed to get the least impressive versions. On the Game Boy Advance quality went on an upgrade trend from parts one through three, however all games were at best above average side-scrolling action games that, like in the case of the “open-world” portions of Spider-Man 2, couldn’t keep up with the other movie games on far superior hardware. Even with the advent of the more powerful DS, Spider-Man 2 managed to be worse than all the Game Boy Advance game despite having better graphics and a 2.5-D art style with its punishing death system, long, directionless levels and tacked on touch-screen gimmicks. Spider-Man 3 on the Nintendo DS is a game that destroys that stigma of the first movie game, managing to easily be the most recommendable version of Spider-Man 3 due to its creative use of the lower touch-screen.

There’s little reason to get into the plot of Spider-Man 3 on the DS as it’s the same as every other version of this game which is to say Peter Parker/Spider-Man must deal with new villains like Sandman, New Goblin and a powerful but deadly alien costume that gives birth to the villain Venom. The only other villain added to the plot outside of the ones featured in the film is the Lizard and presentation wise, this ties with the Game Boy Advance game as being the least interesting with story told via simple, not that attractive looking comic panels though there is some voice clips taken from other versions of the game from elsewhere. Overall though if you skipped through the story to get back to playing the game, you won’t be missing much.

Perhaps the best way to describe Spider-Man 3 on the DS is that it’s an open-world side-scroller. How that works is that New York City is broken into a series of zones where each zone is an area you can explore, like Chinatown or Central Park for example. You can fast travel between zones by bringing up your map in a pause menu or navigate through them manually by going to warp areas within zones that tell you where the next area is. Holding L (or R depending on your handiness) well tell you if there’s any missions within whatever area you’re in as well as point you in the direction of relevant warps and tell you where they lead to. While the game plays strictly on a 2-D plane, there is some dynamic perspective changes as you web-swing around like in Vicarious Visions’ previous DS Spider-Man game, 2005’s Ultimate Spider-Man. 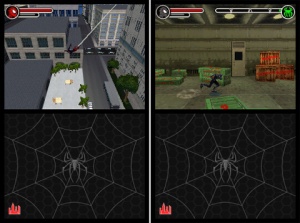 Given that the DS was nowhere near as powerful as its competitor the PSP, this is the best possible way to handle what Spider-Man games had become on consoles without resorting to well-meaning, but overall ugly-looking gimmicks like Spider-Man 2 on the Game Boy Advance. It’s very easy to find out where you’re going using both your in-game navigation and map screen with main missions and side-activities like races and crime watches, basically missions where you have to beat-up all the bad guys in an area before a meter fills to the top, clearly marked. There’s no punishment for using fast-travel so if you just want to keep on the main story path and avoid side distractions you totally can, but there are collectibles to be found within each sub-zone and overall it feels good to swing around, even though it’s not in full 3-D like Spider-Man 3 on the PSP.

Spider-Man 2, the first Spider-Man game for the DS, suffered due to levels that weren’t that fun to navigate, repetitive side objectives and a punishing difficulty that made you restart missions from the beginning. Though there’s interior levels in Spider-Man 3, missions also take place within the “open-world” portions and even when they don’t, levels are much easier to navigate without as many alternate paths and out-of-the-way objectives are removed to streamline things. You’re still doing a lot of the same things like disarming bombs, beating a set number of enemies and transporting civilians to safety, but it’s much more manageable. Unfortunately Spider-Man 3 still has the “die and start over” problem, but levels are shorter and thus much more manageable to replay should you get game over.

What’s most impressive about Spider-Man 3 is its unique control scheme that sounds cumbersome in description but works incredibly well in practice. Some of my favorite games on the DS were those like Ninja Gaiden: Dragon Sword where developers took a chance with using mostly touch screen controls. Often this didn’t work, especially in a lot of first-generation DS games like Spider-Man 2 even where the use of the lower screen felt tacked on, but that’s not the case with Spider-Man 3. Depending on whether you’re right or left-handed, movement is handled by either the directional pad or the face buttons and every other action, save bringing up your map, is handled by the touch screen. You hit up or X to jump and when in the air, hitting left or right will start you swinging with  Simple swipes at enemies or holding the touch screen for a moment initiates combat while doing things like single and double tapping on enemies will do things like snare them in webs and if you swipe towards Spider-Man after he’s caught a bad guy, he’ll pull them towards him. 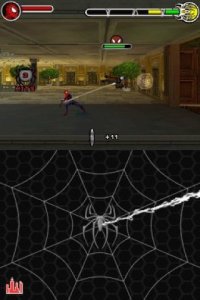 The game starts you off with a brief tutorial to play around with the control scheme before it throws you into the action and after that and a few minutes of play time you’re easily able to launch bad guys into the air, pull them toward and combo attack them on the ground with ease. Using currency earned by finishing missions, beating enemies and finding collectibles allows you to add more advanced moves to your repertoire that task you with doing things like drawing circles to spin enemies around you and there’s very few instances where you’re wrestling with the controls or struggling to pull off exactly what you need to do. It’s a design that not only works well, but also makes this version of Spider-Man 3 unique in that it couldn’t have been done on any other platform. Save a few differences, Spider-Man 3 on the PS2/PSP and Wii are the same game, which is also true of the PS3/Xbox 360 game.

Spider-Man 3 also has quite possibly the best use of the black suit among all the versions. Once you get it, you need to build up a meter to activate it which is done by simply fighting enemies. As long as you keep engaging in combat the suit will stay on, but once the meter depletes, you revert back to your classic red-and-blue until you can build it up again. Combat can get difficult sometimes, especially when stronger enemies that you can’t spam attack on are mixed in with armed thugs with guns and once you get the black suit on, you’ll want to do whatever it takes to keep it on. This is a far cry from Spider-Man 3 on the PSP where you can get through the entire game with only wearing it during story missions when you’re forced to and do just fine.

About the worst thing that can be said about Spider-Man 3 on the DS is that its boss characters are very easy. It’s easy to recognize and execute on what you need to do against foes like New Goblin, Sandman, Lizard and Venom and they’re disappointingly less dangerous than a group of random enemies you’ll come across within the city streets at any time. If you fast travel a lot and avoid side activities, Spider-Man 3 is a very short game as all. It doesn’t lock the story behind having to complete a number of crime watches or winning races which is a good thing, but overall the game can be beaten in less than a handful of hours with lots of currency left over after buying all the extra moves and health upgrades. It does have a multiplayer mode, however given I only have one copy of this game and no one to test the modes with even if I did, I can’t speak on how much this extends the game’s length.

Spider-Man 3 on the DS is easily the most recommendable of all the games based on the film, and is a great reminder of what made the DS special when it was at its prime. The touch controls not only work, but feel great, and how the “open-world” portion has been tackled within the limitations of the handheld make it the closest any Spider-Man game on a Nintendo handheld has come to capturing the freedom offered by similar games on consoles and the PSP. It’s a short game with some easy bosses, but also one of the best Spider-Man games on the DS along with Ultimate Spider-Man and Spider-Man: Shattered Dimensions. Whether you still have any model of the original DS or similarly any of the 3DS/2DS follow-ups, Spider-Man 3 is very much a game worth adding to your collection.