Marvel Studios’ first major block buster this summer, Marvel’s Avengers: Age of Ultron, got its own pinball table in Zen Studios pinball platform and now the studios second biggest, or should I say, smallest, film is getting the same treatment. Coming July 14th for every console and mobile device imaginable is an Ant-Man table based on the film of the same name featuring the title character, the villainous Yellow Jacket, the daughter of Hank Pym, Hope Van Dyne, and Ant-Man’s alter ego, Scott Lang. 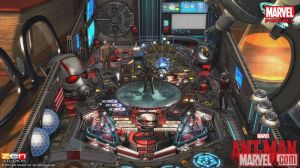