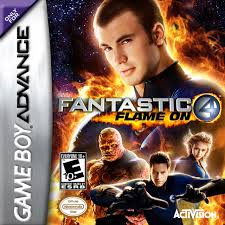 The first Fantastic Four game for the Game Boy Advance that launched alongside the 2005 film of the same name was one of the more forgettable tie-in games, but its poor quality didn’t stop publisher Activision from enlisting that games developer from trying again later in the year. The second Fantastic Four GBA game of 2005, Fantastic Four: Flame On, fixes a lot of complaints I had with the first game: It reduces the characters from four down to one (The Human Torch), the perspective is switched to an easier to manage 2-D side-scrolling game, and it’s a much better looking title. While Flame On is much better the self-titled first GBA game, it’s a pretty generic 2-D game that won’t light your world on fire.

Like Fantastic Four before it, Flame On is set within the story of the first film, but whereas that game loosely retold the film’s plot and shoehorned in other villains into the mix, this game develops its own side-story that interweaves into the main story and its all the better for it. The game’s story starts off where the team has just returned to earth and are testing out their newly gained abilities and when Johnny goes to meet up with one of the female staff members, he finds himself in the crosshairs of the Skrulls who are trying to capture him and steal his cosmic powers.

Fantastic Four brought in other characters from the comics outside of Doctor Doom to test the powers of the team, but it did so awkwardly by just having the police call in the team. This game does a much better job of bringing in characters like the Skrulls, Dragon Man, Terrax and even the planet eating force of nature Galactus that not only makes sense in the confines of the movie’s plot, but also puts the title hero on a globe-trotting adventure.

I didn’t like the awkward isometric perspective of the first FF game as I’ve never found that quite conducive to an action title, so I was happy that Flame On took the route of a traditional side-scrolling that shares a lot of the same DNA as Torus Games’ other great GBA Marvel title, The Invincible Iron Man. As the Human Torch you can dash on the ground or in the air, fire projectile fireballs or unleash screen clearing attacks and a fire blast like Iron Man’s uni-beam or better still, an energy attack straight out of Dragon Ball Z. The controls are great and you’ll never wrestle with them, but with all the power and control you have over your character, the levels themselves don’t present much of a challenge.

Through the short adventure you’ll move from a snowy ski-lodge, the streets of New York City, a volcanic island and eventually a Skrull ship, but even with all that diversity, you’re doing the same thing in those levels. You’ll traverse a more or less obstacle free environment and eventually get locked into a screen where you have to kill everything to move on and while the Torch’s powers are fun, the action gets a bit monotonous as the title wears on. Luckily the game isn’t that long, I beat it in two pretty short sittings over the course of a weekend, and it offers a few more distractions than Fantastic Four did, some of which are expanded upon key Torch moments from the film.

The second stage is a snow board race that is pretty straight-forward; You just go down hill and try to race someone pulling off simple tricks by jumping and hitting “A”. The next is a bit more fun and is a motocross event where you have to race through three laps to beat a high score by hitting ramps and pressing the d-pad in four directions to complete tricks. Neither are terribly advanced but they’re a nice change of pace, only last one level each and are not that difficult.

Quite possibly the best break from the standard 2-D action is when the game transitions to a 2-D space-shooter when Johnny has to travel from one location in the game to another. You never quite get a sense of urgency or danger in the action stages but here you’re in constant threat of dying and always have to be on your toes from enemies coming at all directions.

The first FF Game Boy Advanced game brought in a few more boss fights than just Doctor Doom but for the most part they went down like chumps. While this game has a few of those, it does have some stands out towards the end. The biggest, both literally and figuratively is Galactus which is a multi-level fight where you actually have to help free the giant and another is with Paibok the Power Skrull who will test you abilities unlike any other boss, obstacle or enemy in the entire game. If anything Flame On could have used a few more fights like these spaced out over its entire length to make it a bit more challenging for a seasoned action player.

The Skrull species plays a big part in this game.

Similar to Torus’ Invincible Iron Man, Flame On really shines in its character animation but fails to impress with its scenery. The stage diversity is nice and everything looks okay, but none of the stages never match up with how good the main character looks. Whether flying, hovering, dashing or standing still, the Human Torch is a great looking character and a nice attention to detail was paid in animating the flames that engulf his body.

Compared to Torus’ first Fantastic Four effort, Flame On comes pretty highly recommended but standing next to other 2-D games on the system, it’s just slightly above average. The controls are tight and the character looks great, but outside of a few stand out boss fights and the 2-D flying sections, everything is pretty repetitive and doesn’t change-up enough throughout the course of the game. If you simply must have a handheld Fantastic Four game, defiantly pick this over the movie tie-in game, but unless you’re a die-hard fan of Marvel’s first family, this isn’t anything to get hot and bothered over.