The mid-to-late 2000’s were an interesting time for third-party games given how many different devices were on the market. In previous generations, there would be one version of a game across several platforms, each with own compromises, and perhaps a paired down version on the Game Boy, but in that time period, there were so many unique consoles and handheld devices that for one game, you had to make at least four. You had your main title on the top consoles: The Playstation 3 and Xbox 360; The motion controlled SKU for the Wii; Then where was the Nintendo DS version which despite being the least powerful among all the devices had the largest user base, and its competitor the PSP which had its own limitations that often led to companies porting games to the similarly powerful PS2 that still was going somewhat strong after being on the market since the year 2000.

Spider-Man: Web of Shadows is one of those games that existed in that time-period with several different versions of the game existing across multiple devices that were the same, but also different and hailing from several different studios. The PS3/Xbox 360 game was an open-world game like the two Spider-Man movie games that came before it co-developed by Shaba games and series regular Treyarch; The DS game was a 2-D Metroid-Vania title crafted by Griptonite and then there was the game for the PS2/PSP from Amaze. Sub-titled Amazing Allies Edition, this version of Web of Shadows is a 2.5-D side-scrolling action game that is perhaps more tolerable when played for short bursts on the PSP, but is pretty forgettable overall, especially on a system that houses games like Spider-Man 2 and Ultimate Spider-Man.

Scenario wise, about all the Amazing Allies Edition of Web of Shadows has in common with the other titles is the basic overall premise: After a fight with Venom, his alien costume spawns out of control, infecting not only Spider-Man with the black suit alien costume again, but the whole city of New York, leaving it up to Spider-Man to stop his arch-nemesis and the symbiote invasion from spreading outside of New York. If you like story in your Spider-Man games, this is the version of Web of Shadows you can skip because outside of the set-up, there isn’t much or any of it. Each level starts off with a text exchange between Spider-Man and another character, like Nick Fury or the Kingpin, about what you’re next objective is. The only voice acting comes from random quips spouted from Spider-Man and small voice clips from the bosses you come up against, and there’s little effort put into the presentation. There’s no cut-scenes to speak of, even at the conclusion of the game’s campaign.

A big hook for the PS3/Xbox 360 version of this game was the Mass Effect like morality system where character interactions and the ending would change depending on whether you spent most of your time in the traditional red-and-blue costume or the black suit alien costume. This too carries over in the Amazing Allies Edition, however it’s nowhere near as developed or important. When you run across citizens in the street or other Marvel heroes like Luke Cage or Black Cat, you engage in small conversations where you can choose either the good or bad option , but neither have any real consequences. I played through the entire campaign on normal using only the red-and-blue suit with little to no difficulty, so ultimately it comes down to what outfit you have a personal preference over.

Despite existing on a console that before 2008 housed three, 3-D open-world games, Web of Shadows on the PS2 is a 2.5-D side-scrolling action game which makes this title stand out from the other games on the PS2, but really that’s about all it has going for it. Every level in the short campaign has you crawling around fairly open environments, pummeling on the same few easy to defeat bad guys over and over again. Periodically you’ll come across citizens who will give you side-quests, but this usually just means picking them up and escorting them somewhere or clearing a room full of enemies. Others are overly bizarre, like someone who wants you to keep fixing his satellite dish on his roof because his TV reception is out. This guy CLEARLY has his priorities straight when the rest of the city is being possessed by alien symbiotes.

Defeating enemies provides experience that can be used to level up which ever suit your playing with, but the upgrades can be maxed out very quickly and just make the game easier than it already is by making your attacks stronger and letting you take less damage. There’s a few moves to unlock, but you can stick with just hitting the square button and you’ll be fine. Upgrades not only require experience gathered from combat, but alignment points made by making good or bad choices. This normally provides some replay value to see how things play out from either side, but you can easily fully upgrade both suits during one play through and the ending doesn’t change depending on what side of the good/evil coin you fall on. Early on the game teases that the alien costume can do things like charge walls or stomp floors that open up pathways the classic costume can’t, but this rarely comes up after the first few levels so those expecting some of the exploration elements like the DS game will be disappointed.

What makes this game the Amazing Allies Edition is that you can find temporarily summon heroes and villains to Spider-Man side through the use of consumable items you find within levels. These range from A-listers like Wolverine to characters that will make you say “huh?” like Stilt-Man and Hypno Hustler. While there is some novelty at first to seeing Galactus’ foot stomp some random street-thugs that you’re fighting, this gimmick becomes pretty pointless and wears thin because frankly, your regular attacks do just fine. You can also find items that come in various degrees of potency that grant things like health and armor buffs, but the game is so easy that you’ll find little need for them. You can also tell that this game was little more than a port of the PSP game of the same name, as to switch between items within a level, you have to be standing still while holding the L1 button to do so, even though there’s two triggers on the PS2 controller that could service this much more organically. 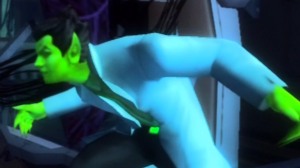 It’s disappointing that The Jackal here is not in his more-animal like design.

Other than the ability to summon support characters, what also makes this game different from the one found elsewhere is the bosses you’ll come up against. The game opens and bookends with a confrontation with Venom, but in-between you’ll encounter classic villains like Kraven the Hunter, Shocker and for the first time in any video game even to date, The Jackal, who does more in the plot here than Venom but sadly doesn’t get into any cloning shenanigans which seems like a missed opportunity; For once in a video game you can explain why you’re fighting a bunch of people who look exactly the same!

Some of the bosses, like the ones with Shocker and Kraven will keep you on your toes and require somewhat quick reflexes, but most can be conquered by simply punching them until them until their health meter runs dry. None really have any interesting hooks like those found in even the Spider-Man games on the PSOne and are only made artificially difficult by Web of Shadows loose collision detection where sometimes your punches and kicks don’t seem to connect like they should, but this doesn’t really make the game unplayable, just a tad loose and unwieldy.

As this version of Web of Shadows was running on hardware that was way past its prime, it was unreasonable to expect it to look nearly as good as its counterpart on either the PS3 or Xbox 360. While it’s not the worst looking game on the PS2, it’s visually unexciting. The fact that it’s 2.5-D isn’t the problem, it’s that the levels themselves are things you’ve seen a million times before in other games, even Spider-Man ones, like city streets, warehouses and sewers that don’t really take advantage of a character like Spider-Man’s universe or abilities. You can web-swing, but you rarely need to, and other than a few vents you need to crawl through, this really could’ve been any other character. Similarly the music when present is easily forgotten or just droned out.

Spider-Man: Web of Shadows – Amazing Allies Edition is not the worst Spider-Man game, nor even the worst PS2 game, but it’s not exactly required playing either. Hardcore Spider-Man and Marvel fans can find some justification in playing this game to see a villain like The Jackal in a game for the first time, or summoning the Hypno Hustler to your aide, but casual fans of the character are better off sticking to either a Spider-Man 2, Ultimate Spider-Man or even Spider-Man on the PSOne. This is a slightly above average game that  could be worth it at the right price, but you’ll also forget it the second you complete it. If you want to try this and have a PSP kicking around still, it might be better tracking down that version and playing in short bursts, but if you fancy yourself a Spider-Man fan and would rather play on a console, like I do, the PS2 port will do.