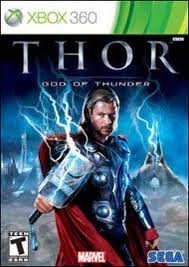 Thor: God of Thunder gets a pretty hard rap. I’m sure it’s been listed on a couple of “Worst of” lists for the year 2011, and can be found heavily discounted in bargain bins everywhere in large quantities. So, is Thor REALLY that bad? Well….okay so Thor can be good. Is it really good? No. Did it nearly give me a heart attack while playing it in shear frustration? That would be a yes. But, it’s not a complete right off by any stretch of the imagination.

Thor continues with the trend set by Iron Man 2 in that it is a completely original story from the film. After the Jotun invade Asgard, Sif falls in battle and Thor is out for blood for those responsible. Odin refuses Thor request to head to Jotunheim for fear of starting an unnecessary war. Always the Trickster, Thor’s brother Loki devises a plan that will help his brother get his vengeance, but has a hidden agenda that eventually has Thor questing through the nine realms to destroy an ancient evil long since sealed by his father that he unwillingly unleashes. 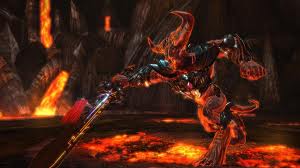 Much like the issue for the original Iron Man, I’ll try to point out some of the things I liked in Thor. Firstly, the levels themselves are varied so you never get bored looking at the same environments over and over again. The realms visited do fall into classic videogame tropes (Jotunheim = Ice, Muspelheim = Fire, etc) but you’ll want to push forward to see what’s around the corner.

Thor also has a very extensive upgrade system. You can upgrade four different elemental attacks, your melee and hammer throwing abilities, though when it comes to your elements you can get away with just upgrading your lightning abilities.

Both Chris Hemsworth and Tom Hiddleston reprise their roles as Thor and Loki respectively and both do a great job. Their voice acting truly shines in the moments they get to share on screen and the scenes themselves do have some funny moments. Hearing what the two will say next will be one of the other reasons you’ll push through Thor. 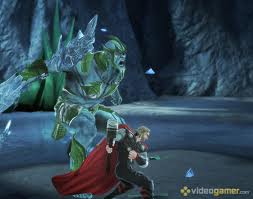 So what exactly is bad about Thor then? Well, for starters the gameplay is not that great. Thor is trying to be a character action game similar to a God of War or Bayonetta but unfortunately fails. Thor’s weapon, the enchanted hammer Mjolnir, feels weak when you hit enemies and the foes themselves take forever to kill. There are many areas in the game where you feel as if you’re supposed to die when you in fact are meant to kill everything. The word “God” is in the title, but you rarely feel like one.

But that doesn’t even begin to describe one of the worst atrocities in Thor, which is one of the last chapters of the game. SPOILERS you eventually return to Asgard and find it under siege, and it is up to Thor to defend Asgard. To do this, you have to tackle several different tasks, like defending the Gallahorn and defeating a massive Frost Giant. In order to accomplish this mission, you must successfully defeat five or so tasks while keeping Asgard’s battle spirit up. If you get to say, the last task and meter runs out, you have to start over from the beginning or from a previous save. This is without hyperbole, one of the worst areas I have played in any videogame, and a frustrating goal to put towards the end of a rather mediocre adventure. 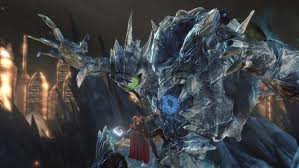 Thor: God of Thunder did have a lot of potential. The character and the universe he inhabits do give a lot for a developer to work with and build upon and it’s clear that the team at Liquid Entertainment were fans of the best character action games like God of war, Bayonetta, or even X-Men Origins: Wolverine from two years ago. Unfortunately the final product does not live up to the titular God, but I would definitely like to see someone try to take a stab at the license as it does have a lot of potential to be a great videogame franchise.