By the time the final two Sega published Marvel Cinematic Universe games came around in 2011, many had wised to the fact that these were games that could be avoided. After excitedly coming out of theaters and blindly buying the likes of Iron Man, The Incredible Hulk, and Iron Man 2, games that promised players the opportunity to become the larger than life heroes they had just seen on the big screen but delivered on none of those promises with a few exceptions, enough was enough. On paper, Thor: God of Thunder for PS3/Xbox 360 should have been a smash hit: Take the third-person combat and mythology theme from Sony’s God of War, swap out Kratos and Greek mythology for Thor and Norse themes and call it a day; Essentially make “God of Thor”. With a magic hammer that felt more like one bought at Home Depot and frustrating challenge, Thor: God of Thunder on PS3/Xbox 360 was of the worst Sega Marvel games and cast a long shadow over all the other versions which were superior in nearly every way, especially the game of the same name on the original DS. If you played Thor: God of Thunder on either the PS3/Xbox 360 or avoided if because you knew better and dismissed the DS game, now’s the time to rectify that mistake. Thor: God of Thunder from WayForward is a gorgeous 2-D action brawler that delivers on the promise of the main console game and wouldn’t be out-of-place among the best super hero games of the 16-bit era.

The DS version of Thor: God of Thunder doesn’t follow the plot of the film nor that of the other God of Thunder games, however it does have a similar story structure as the other SKU’s and works in the general themes of the first movie of Thor learning to let go of his anger and pride to be a more humble God. When trolls from Vanaheim invade Asgard and presumably end the life of Thor’s partner in arms Sif, Thor in a fit of rage is tricked by his brother Loki into setting off in search of those responsible while unbeknownst to him his brother has bigger schemes and plans in motion. God of Thunder isn’t the best Thor story you’ll experience in your life and you won’t be surprised at all by some of the twists in the plot, but it’s serviceable enough in providing reasons for Thor to quest through several of the Nine realms including Vanaheim, Jotenheim, Muspelheim and of course, Asgard. Exclusive to the DS version is a level that takes place in Helheim that ends off with a boss battle with Hela, who will make her big-screen debut in Thor: Ragnarok,  that is the first appearance of that character in a video game.

The primary Thor: God of Thunder game was an unattractive, 3-D character action game with such loose feeling combat mechanics that it never made you feel like you were wielding the enchanted hammer, Mjolnir; Thor: God of Thunder on the DS is the exact opposite of that in that it’s a beautiful looking, 2-D action game where it feels very satisfying to bash on waves of trolls, frost giants and other creatures with Thor’s trademark weapon. WayForward, whether in properties they own like Shantae or their licensed games like Batman: The Brave and the Bold, have proven themselves masters of crafting gorgeous 2-D games and Thor: God of Thunder is no exception. If this game didn’t use both screens in its level design and you showed someone a screen shot of this game and said it was a a long lost Konami game from the SNES, they would probably believe you. Thor, his cast of comrades and enemies and giant bosses that sometimes span both screens have sprites that are expertly crafted and look far better than what many would deem a throwaway movie tie-in game deserves.

God of Thunder is a pretty basic game in that in can best be described as a 2-D brawler where you’ll move from left to right, periodically getting stopped by waves of enemies you have to kill before you’re allowed to progress, but there’s a surprising amount of depth to the combat. You have a basic attack, dodge roll, and can throw your mighty hammer at enemies in all directions. The game starts off fairly simply with throwing enemies that you can easily just mash the attack button to get through, but eventually you’ll get introduced to enemies that carry shields or fly above you in the top-screen, shooting projectiles or diving down to attack you. 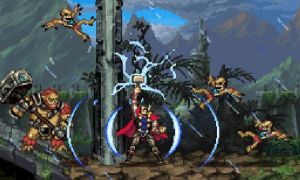 Towards the end of the four-to-five hour campaign you’ll  have all types of enemies on screen at the same time that require mastery of the mechanics to get through and the challenge comes at a reasonable pace. If things get overwhelming, you can activate one of your God powers, like summoning chain-lightning, but even that has a risk/reward mechanic attached to it in that you need to fill up a meter in order to use these moves and you never know if you’ll come across a more challenging room of enemies just around the corner.The most fun encounters in Thor: God of Thunder are the boss fights against the likes of Hela, Surtur and Ulik among others. With the exception of Hela, they can fill either one, sometimes two, screens and require very quick reflexes, as well as a lot of patience, to topple. In classic 16-bit boss fashion, the key to winning in these fights is to learn patterns and avoid massive chunks of debris, large beam blasts and tiny projectiles that sometimes make this feel like a bullet hell game.

Thor’s size compared to what he’s fighting shows how massive the bosses are.

Further adding depth to the combat is the ability to equip Runes. Hidden, though not very well, in levels are Runes that you can collect that add perks like added health, increased attack damage and the ability to create a shock wave when you throw Mjolnir among many others. You can have three equipped at a time and you can stick to whatever ones fit your play style but it’s wise to experiment to fit whatever scenario you’re in. There’s tiny enemies that can swarm Thor and take away a lot of your health, but selecting a Rune that prevents enemies from grabbing on to you negates their ability to do that. The shock wave power attached to your hammer throws is good in dealing with crowd control, but not very helpful when you’re going one-on-one with a boss so it might be best to swap out that for increased attack instead.

About the only thing that keeps Thor: God of Thunder from being truly excellent in that it can get repetitive, especially in long play sessions. There’s a lot of depth to the combat, but it’s also about all that you’ll do. The levels have a lot of visual variety as you travel across the realms, however save a few occasions where you’ll have to maybe fly upwards to the top screen to clear a barrier, they’re a means to an end to funnel you from brawl-to-brawl. Playing around with Runes adds flavor to the combat, but they’re also not hidden very well and all can be found by just grabbing pieces of platforms that shake them out. Stages will sometimes add obstacles like rocks falling from above or making you have to carry an object to prevent you from taking damage from acid rain, but these are few and occur more towards the end than spaced out evenly throughout the campaign.

There’s also very little in the way of post-game content, and what is there is equally terrific and disappointing. Completing the campaign unlocks a level where you can play as a number of characters like the Warriors Three, Sif, Heimdell and Loki and you can take two characters along with you as a partner. They each have their own unique movies: Loki can teleport behind enemies and attacks with his daggers and Volstagg is slow but powerful for example, but no matter who you pick, you’re going through the same straight path of bad guys. Seasoned players can also finish Thor in a few hours, but that being said, the game doesn’t pad out its play time and considering that 16-bit action games took around that time to finish or less, it’s that not that big of a deal that this isn’t a twenty hour game

Thor: God of Thunder on the DS is a game not to be missed if you love classic, 16-bit action games or even have a little interest in the source material. Don’t let the negative reviews of the primary version of this game dissuade you from looking into this gorgeous, tight-controlling action game that is the best video game years later to have the word “Thor” in the title. It’s short, has little in the way of post game content and it can get a little repetitive if you marathon it, but there’s enough depth in your basic moves and Rune power-ups to keep even the most mundane encounters interesting. With the exception of X-Men: The Official Game, there’s few reasons not to play a comic book themed game put together by the team at WayForward.