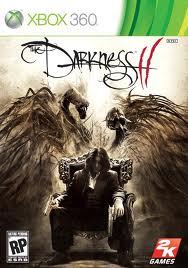 For those who didn’t know, the Darkness is a title under the Image subsidiary Top Cow productions which debuted in the mid-1990’s. In the early years of this console generation, the Darkness came from developer Starbreeze studios (Chronicles of Riddick: Escape from Butcher Bay, the upcoming Syndicate reboot) and publisher 2K Games (Bioshock, Borderlands). Despite being a moderate sales success and critical darling (averaging about 81% on metacritic amongst its two SKU’s), the Darkness sequel would not see the light until about 4 and a half years from its initial outing.

Hailing from the developer Digital Extremes (Dark Sector, Bioshock 2 multiplayer, upcoming Star Trek) comes the Darkness II, available for release on 02/07/2012. The demo dropped this week on XBLA for gold members, and it’s a fairly large one, coming in at about 1.4 GB’s.

The demo uses an interesting narrative tool to showcase several scenes that will ultimately not appear in linear order in the final game. [SPOILERS FOR THE DARKNESS] Having unleashed the Darkness and murdered those responsible for the death of his long time love Jenny, Jackie Estacado has taken control of the Franchetti mob family and buried the power of the Darkness. However, all of that changes when Jackie’s life is threatened by a group known only as the Brotherhood, who seem to have more knowledge of the ancient power than its current wielder and want it for themselves.

At the onset, Jackie is not in a good place. Crucified to a cross and tortured by a Brotherhood member. From this area, Jackie flashbacks to early this evening when the first assault took place. After exiting his vehicle, Jackie enters a restaurant and is escorted through, taking in all of the conversations as he meets up with two blonde twins at his private table. One of the areas where the Darkness stood out were its smaller moments where Jackie was taking in the world around him, whether it was spending time with Jenny, talking to random people or riding the subway. Digital Extremes has a pedigree in the shooter space but it was yet to be seen if that particular unique aspect of what made the Darkness great would be present, but it appears that they at least do want to do their own spin on what Starbreeze accomplished.

Not long after his arrival, a car smashes through the restaurant killing Jackie’s company, and nearly himself. Literally being dragged through the restaurant, the player is finally given a gun. Shooting is standard FPS fare at this point, Jackie can both single wield and duel-wield (activated by simply hitting down on the d-pad) and look down iron sights. The real fun being when Jackie gets outside.

Nearly dead, the Darkness speaks to Jackie (hauntingly voiced again by former Faith No More front-man, Mike Patton) telling him the only way to survive is to let the Darkness out. One of the most touted feature of the Darkness II is DE is referring to as “quad-wielding”, being two triggers for guns and the other two for the Darkness tendrils. The right bumper is used for melee, with a corresponding control stick direction used for vertical and horizontal slashes. The left bumper is used for grab attacks and creative kills. Wounded enemies show an x-rayed purple heart, indicating they are susceptible to this attack. While I’m not sure how to initiate the various attacks, I witnessed everything from the tendrils gruesomely “wish-boning” a thug and wrapping around another anaconda style and eating his heart (which restores health, not quite in the Zelda fashion, but equally as effective).

Outside of grabbing enemies, the grab tendril can also be used to interact with various items in the environment. Some examples would be using poles to throw like javelins, grabbing car doors to use as disposable cover, picking up ammo and eating hearts of the helpless.

The Darkness II is arriving at a very competitive time in the FPS space as opposed to its predecessor. Other than the creative use of the Darkness powers and “quad-wielding”, what truly makes the Darkness II stand out are its visuals. As it is based on a comic property, developer Digital Extremes wisely chose to use a cel-shaded style that borders between realism and graphic novel. While treading in familiar territories environment wise (urban areas, subways, etc) and lets face it, the darkness, the graphics stand out in the sea of similar realistic shooters that dropped to store shelves this holiday season. Even with the gruesome acts going on all around you, the game still manages to somehow look pretty.

The Darkness is an underrated gem in this console generation that a lot of people may have missed, maybe due to the fact that the hardware install base was limited. Four years seems like an eternity in this day and age between sequels, so it remains to be seen if gamers will still remember the Darkness or have moved on to other things. From the impressions of the public demo, it’s a game that people should put on their radars.

2 thoughts on “PREVIEW: THE DARKNESS II”