Existing as I do now in the future, I can’t think of anyone I would rather make a Punisher videogame than Volition. This is the studio that put itself on the map for making EVERYTHING destructible in the Red Faction shooter franchise, and would eventually go on to make the crazy over the top Saints Row series.

The Punisher (released for the PS2, Xbox and PC in early 2005) exists as a semi-sequel to the 2004 film starring Thomas Jane, and even has Jane reprising his role as Frank Castle/the Punisher. Castle’s neighbor’s Joan and Spacker Dave both appear in the story, and the identity of Jigsaw is altered from the comics to be John Saint, the son of John Travolta’s character, Howard Saint. At the start of the game, Frank Castle is imprisoned at Rykers Island and being questioned by Detectives Molly Van Richtofen and Martin Soap. Each level of the game is Castle’s account of the events that have led him to that point, allowing the game to jump to different locations and still flow well.

The Punisher is a third-person shooter that plays really well even today, though the lack of any type of cover system feels a little bit primitive by today’s standards. The Punisher’s arsenal grows from the start of the game from pistols and shotguns, to shooter staples like rocket launchers, sniper rifles, flamethrowers and my personal favorite, the dual hand cannons. Once a weapon has been picked up in the environment, it can be selected as the starting loadout in any mission after that. By racking up kill combos and not taking damage, points are accumulated that can be used to upgrade the Punisher’s weapons, armor, and “slaughter mode”, which builds up as well and lets you regenerate health and become impervious to enemies.

The thing that makes the Punisher stand out from its shooter peers is the interrogation system. Throughout every level there will be foes with skull markings above their heads that have information to make level progression easier. It is in this area, that developer Volition really got creative. The helpless mark is brought to one of the many kill areas, some examples being a gate in front of a charging rhino, dangling over a shark pit or under the wheels of a forklift (I won’t spoil all of them). Each is met by a darkly humorous one-liner delivered by Jane. Level progression is made that much more fun sometimes by finding out which device is around the corner to torture the Punisher’s victims. 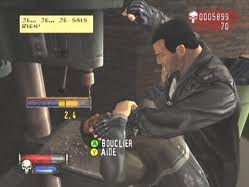 As I mentioned earlier, the Punisher exists as a semi-sequel to the 2004 film (both actually use characters and plot from the story “Welcome Back, Frank” written by Garth Ennis, whom also penned the story to this game). What is really impressive is that not only are there characters that make this an excellent Punisher game, but other characters from the Marvel Universe are brought in as well with great effect. Some of the characters you’ll come across in the 8 or so hour campaign include Black Widow, Matt Murdock, Kingpin and Iron Man, which a few more throw in as well.

The Punisher is a great game that fans of the series, or even shooters in general should check out. After the credits of the game, there was a set up for a sequel that for some reason for another never got made. I would love to see Volition take a shot (ha!) with the Punisher license again, with HD visuals and a proper cover system.

The Punisher is available for PS2, Xbox and PC. The Xbox version is backwards compatible with the Xbox 360 and looks pretty great for an 8 year old game.

3 thoughts on “REVIEW: THE PUNISHER (XBOX)”