Capcom is no stranger to licensed games, having crafted dozens of superb games based on the Disney license in the 8 and 16-bit era that are still well regarded by many today. They’ve also been known to dabble in the Marvel Comics world as well: you might know of a little series called Marvel Vs. Capcom, which also made a home on the Dreamcast. Spawn: In the Demon’s Hand is Capcom trying to morph the frantic, arcade action from the “VS.” series to the third-person shooter multi-player arena. What resulted is a product that may have been great fun when released back in the year 2000, but hasn’t quite aged well for the year 2013.

Like a lot of Dreamcast games, ITDH started off life in the arcade. The game is a third-person arena action game, kinda like a more over the top version of the Goldeneye matches you played on the Nintendo 64, or Unreal Tournament. There’s little to no story to speak of; you’re simply thrown into a claustrophobic arena with a few A.I bots and are tasked with defeating a boss character while racing against a time limit.

I can see how ITDH would’ve made an excellent quarter munching arcade machine for Capcom, but it doesn’t translate quite as well to the home space. You’re dying more time that you’re alive, and more often than not you’ll not know by whom or what. Most of the playing arenas are cramped one stage rooms that lead to quick deaths from all angles. Some of the arenas have multiple rooms and vertical pathways, but it’s much easier to lose track of the boss you’re tasked with defeating. There is a radar for quick reference, but moving your eyes away from the action for a split second in this game is bound to get you killed. 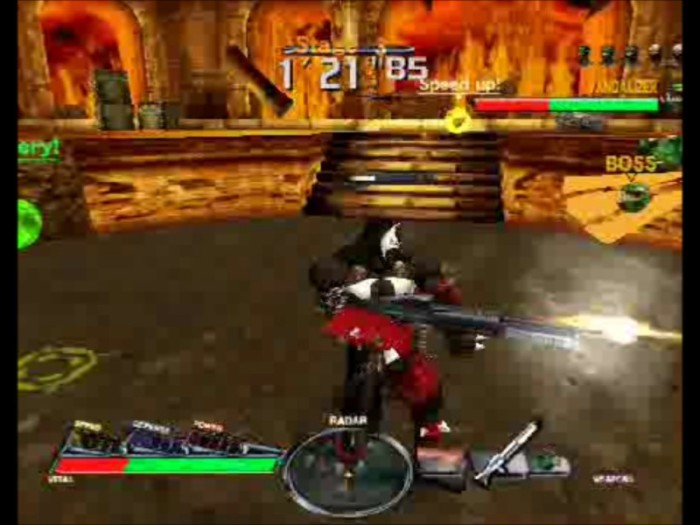 What it comes down to is that the title focuses more on patience than actual skill when playing single player (not the way it’s meant to be played, but how I played it), as you whittle down the bosses life to move on to the next arena. In the arcade the penalty for death was losing another quarter, here it’s just pushing the start button to reSPAWN (see what I did there). Should you choose, you can also adjust the time limit to as high or low you want, effectively eliminating the timer as a threat.

Anyone that’s made themselves at home with today’s modern shooters will have a Hell (2nd Spawn pun) of a time adjusting to the controls in ITDH. Characters that utilize fire arms, like the titular character, cannot strafe and can only fine aim while standing still, a good way to die in this frantic action game. In an odd design choice, you cannot use the Dreamcast’s one analog stick for movement, just the directional pad.

Not all of the characters are shooting based, however, and that is probably the best thing ITDH has going for it. You can choose from a wide assortment of characters from the Spawn universe, such as Cogliostro, the detective duo of Sam and Twitch, Clown, the Redeemer and countless others. The game offers a decent amount of variety to make you want to at least try out each of the characters to find out how they play. As mentioned above, Spawn utilizes conventional firearms, while the Redeemer has access to melee weapons like a sword and an ax. One of the characters, the generic Hellspawn who looks like Cinder from Killer Instinct, can only punch and has no weapons to speak of.

As this is a Capcom game, getting access to the roster can be a bit of a chore. You only start off with a select number of players to choose from a wide variety of question marks for the rest that you have to unlock by running through the single player over and over again. If you play by yourself, the campaign will only last seven stages but you’ll soon find you’re not getting any new unlocks. If you don’t have anyone to play with, I recommended having at least one A.I friendly character with you because then you’ll be able to play the full fifteen stages and come face to face with the last boss, Malebolgia.

Outside of the main boss rush campaign, the rest of the modes are pretty standard for this type of game: you’ve got your team battle mode where you have to take out the opposing team, and a battle royale mode where it’s everyman (or monster, or Angel) for themselves. Either way everything in the game boils down to kill or be killed.

If you’re a huge Spawn fan, ITDH plethora of playable characters pulled straight out of the pages of the book should generate enough interest in putting in the time to unlock them, especially in finding out each players moves and weaknesses. Anyone else however may want to look elsewhere for their multi-player arena fix, as the game’s controls and lack of modes are incredibly dated, even by the standards of other games around or before the year it came out.