Back in the short window of time when Sega’s swansong console the Dreamcast was seen as a viable contender, the bread and butter of the software line-up was arcade ports, especially in Capcom’s catalog of games: Street Fighter III, Street Fighter Alpha 3, Power Stone, Spawn: In the Demon’s Hand, Cannon Spike, and the unforgettable Marvel Vs. Capcom, both 1 and 2, are just some of the games that sold many on the console. While some of these games, mainly the Street Figher and Vs. Series titles, are still terrific games that are still enjoyed, played and beloved by gamers all around the world today, others are very much a reminder of how far multi-player gaming has evolved in the past sixteen years. There’s perhaps no better example of this than Heavy Metal: Geomatrix, a game that when it arrived on the Dreamcast in 2001 on North American shores was already well behind the curve of other games from the same publisher.

With a story credited to Heavy Metal publisher and Teenage Mutant Ninja Turtles co-creator Kevin Eastman, as well as Heavy Metal contributor Simon Bisley, you’d think the story in Geomatrix would be pretty entertaining, however without the instruction manual, you wouldn’t even know there is a narrative as there’s none actually developed in game. In the 21st century humanity develops Nanobot technology that allows them to live within cyberspace but a catastrophic event brings humanity to near point of extinction. This tragedy causes people to create a technology that allows them to transfer themselves into cyberspace permanately, but in turn creates a power struggle amongst several gangs who are fighting for dominance in this new digital world. That’s a pretty robust back story for a game that can be summed up to people in gangs are fighting against one another. Without opening the literature in the game you’d have absolutely no idea about the origins of this world, and even when you learn about it, it doesn’t really change your opinion of it one way or the other. 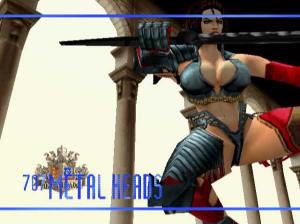 Within the game there’s four rival gangs each with three members for an opening roster of twelve characters, and If you only have a faint knowledge of the world of Heavy Metal, you can probably can describe what each character looks like. If the characters a male, they of course have huge muscles, impossible to actually wear pieces of armour and have names like Lance, Sarge, Zeus and Stab. If you’re playing a member of the fairer sex, you can expect a distinct lack of clothes, garters, a bikini top or corset covering some big…assets, and a g-string, obviously. I will have to give credit where it’s due though, as one of three female characters, Kassey, is actually fully clothed, because according to the booklet she is a computer genius with limited fighting experience. Everybody knows that the computer girl would be the demure one.

If you played Capcom’s launch title Power Stone, it’s sequel or Spawn: In the Demon’s Hand, you’ve played Heavy Metal: Geomatrix. Like those two games this is a 3-D arena fighter where you run around collecting various weapons and power-ups to take down your opponent. It’s much less interesting visually and mechanically than Power Stone where you had to not only defeat bosses and race to the titular stones to charge up your character, though it’s better than Spawn as you’re squarely placed in one arena as opposed to having a multi-tiered environment where you spent a lot of time tracking down your opponent, or couldn’t see them because the level was too cramped.

Similar to Spawn though, the control scheme isn’t suitable to this game’s pace. A greater emphasis is placed on guns, rocket launchers and swords, but in the case of firearms, you have no way to aim and are reliant on a lock-on with no option to free-aim, even when you’re standing still. This is serviceable when matches are one-on-one, but while playing arcade mode you’re thrown into matches where you’re tasked with eliminating two opponents fairly quickly. This leads to you hunting down one enemy, only to get attacked from another who you then turn your attention to only to get unfairly killed by your initial prey.

If you’re playing solo, Geomatrix also has a distinct lack of features to keep you interested for very long. There’s the standard arcade mode, which I could never actually get through once the game forced me to tackle two enemies, and another called Chaosmatrix. Here your thrust into bland areas that look like the VR training missions from Metal Gear Solid where you’re given a goal of either collecting a key and locating an exit; Defeating an enemy and locating an exit or both. These stages also don’t hold your attention very long, and they also focus more on plat-forming than the arcade mode. Much like shooting, jumping is a nightmare as the camera is too close to your character and you can’t adjust the camera to make more accurate jumps. In levels where you’re simply tasked with getting a key, it’s easy to die just looking for a platform in which to get vertical because you’re being attacked. As these levels are timed, chasing down and killing an enemy, or enemies, is not always ideal.

Chances are if you love the Dreamcast, especially like I do, you have a game like Power Stone in your collection already, and if you don’t, I’d recommended seeking down a copy of that over Heavy Metal: Geomatrix any day. There’s just not enough new or interesting in this game that warrants checking it out, especially given the fact that there’s so many fighters on the system, 3-D or other wise, that are so much better. At this stage in the game, Heavy Metal: Geomatrix is a game only for those who simply must own every single game that the Dreamcast had to offer.