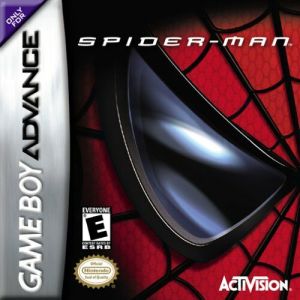 Spider-Man (2002) was a movie game through and through, weaving in the events from the film starting with Peter Parker chasing the burglar who killed his Uncle Ben, leading up to a final confrontation against the Green Goblin with sub-plots spliced in featuring classic Spider-Man villains to expand the game. The Game Boy Advance game of the same name despite having the same cover art as the title elsewhere and featuring a pretty decently compressed FMV trailer upon start up feels less like a Spider-Man movie and more like a regular Spider-Man game, which isn’t exactly a bad thing. It does capture some elements of the film, like the attack at the world unity festival (sadly no Macy Gray), as well some of the expanded plots of the movie game like Shocker attacking a subway station and a chase with the Scorpion, but otherwise this could’ve just been a regular, non-movie Spider-Man game and it wouldn’t have suffered either way. On top of the above mentioned villains, Kraven the Hunter, who on consoles was only featured in Xbox original game, appears here in two boss fights giving this game somewhat of a leg up over the PS2 and GameCube game. 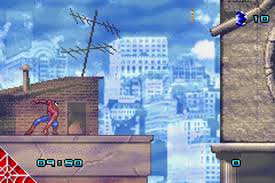 In the last few Spider-Man handheld games for both the Game Boy Advance and Game Boy Color, developers tried unique things like having a somewhat open world in Spider-Man (2000) and a level select in Mysterio’s Meance, but here things are strictly linear, but it’s not like there isn’t room to explore as well. Levels aren’t simple get from point A to point B affair, instead forcing you to explore maze-like levels in search of hostages that need to be rescued and bombs that need to be defused. The levels are open enough to stretch your spider-muscles by web-slinging, web-zipping and sticking to surfaces. This can be made artificially difficult however as there’s never any clear direction on where you have to go. Something as simple as say, the spider-sense meter from Spider-Man and the X-Men on the SNES/Genesis would’ve been nice as the levels do have a strict time limit, though it rarely comes down to the wire time wise. The limits strike a good balance between quick portable play and having just enough time to explore for whatever it is you need to track down. Thankfully unlike Mysterio’s Menace the game supports a save feature so you don’t need to write down/take a picture of passwords.

Outside of the traditional 2-D side-scrolling stages, you’ll have to partake in a bonus game that’s perhaps the standout part of Spider-Man (2002) that may not wow as much as it did back then as we have consoles now that you can literally play on the go, but they’re still nonetheless impressive given the power of the GBA hardware. In the bonus stage you’re in a pseudo-3-D perspective where you rhymitically have to tap on “A” to keep Spider-Man web-slinging and seek out poison gas balloons that the Green Goblin has released around New York City. There’s no enemies to fight or no increased challenge really in later bonus stages, but the way they captured Spider-Man sprite swinging against a 3-D city scape on a primarily 2-D handheld was something that not a lot of people were doing back in 2002. 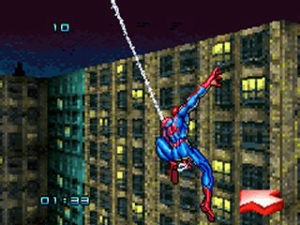 The tech behind Spider-Man (2002) is both one of its greatest strengths, but also can work against it as well. The regular stage sprite for Spider-Man is great looking and expressive, as are the bright and colourful worlds you have to navigate, but the level of detail can sometimes obscure objective items you need to track down like bombs, or hide dangerous traps, especially in later stages like a carnival or Oscorp labs. Prepare to die or have to reload your stage from time to time as your lives get eaten away by explosive traps that you can’t see unless you’re really looking, or miss a bomb that looks like a control panel on a vehicle. Spider-Man’s high level of animation and detail also create another major problem for this game: collision detection.

Spider-Man can stick to walls, I know that, you know that, but at times in Spider-Man (2002), the character is a little too sticky. You can find yourselves gently brushing up against an object that you’ll start clinging too which often cause you to not be able to successfully navigate carefully placed traps. A mechanic that’s useful in many a Spider-Man game, whether 2-D or 3-D, is the ability web-zip quickly to a location, something that you can do here, however instead of just straight travelling from two points, Spider-Man will land, and then do an arch that while impressive looking, is completely unnecessary and cumbersome. In one of the early stages you have to get a key to progress, one of which is housed between two electrical traps that you think is easy to get to, but in execution isn’t as Spider-Man zips straight to where you want him to go, only to then swing in an arch straight into an electrical field. This is something that doesn’t get any easier as the game goes on, with one of the more frustrating levels occurring later on in Oscorp that requires tricky web-slinging skills and cheap deaths.

The issue with loose collision detection also hampers what little combat the game has also, affecting not only the regular stage enemies but the few boss fights as well. You have only one real attack by hitting the “B” button, but whether you’re tackling a thug with a gun or Shocker, you never feel like your hits land correctly. Whether it’s explained in the instruction manual or not I’m not sure because I only have the cart, but there’s a modified attack  you can do by performing a quarter-circle motion on the d-pad and hitting attack which becomes your go to attack for every enemy which is a shame. It makes bosses like Green Goblin an absolute joke and fights with Kraven where he’ll hide in the dark until you activate lights seem like wasted potential. You can tell that some effort went into designing clever bosses, but the execution isn’t quite there. You also have a wide variety of web-projectile attacks activated by hitting the “L trigger, but they never really become that useful and getting one replaces the one you already had. Some type of menu where you could swap between powers would’ve helped with this, or having enemies or traps that needed to be disabled with certain power-ups. Only one boss, the Oscorp mech that appears in the console game, requires a projectile weapon of any kind and I got through the game with little to no trouble not using anything other than basic attacks. 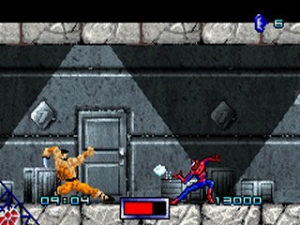 Spider-Man (2002) is a great looking game with some great looking 2-D stages and sprite work complemented with some at-the-time state of the art tech, however looks alone don’t make a game. Spider-Man (2002) isn’t exactly bad, but given that when it was new fans already had access to Mysterio’s Menace and now there’s even better portable Spider-Man games, there’s little reason to seek out Spider-Man (2002) unless you simply must have every Spider-Man video game (like I do). If you can get it for cheap and have the means to play it by all means give it a try as it won’t take you very long to complete, but only die-hard fans need apply.