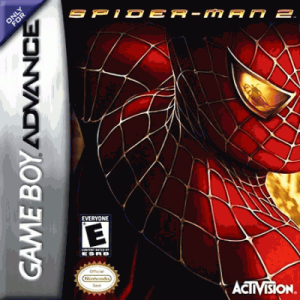 Spider-Man 2 on the sixth generation of consoles was one of the most important comic book games of all time, radically changing how we thought about how the character of Spider-Man works in a three-dimensional space by giving players the freedom to more or less swing around and do whatever they pleased in an open-world environment. It’s a template that many have tried to emulate since the game came out in 2004, and despite having beefier consoles on their hands, many game developers still can’t quite change people’s minds that Spider-Man 2 is the best Spider-Man game to date. Unfortunately the game that went by the same name on the Game Boy Advance didn’t redefine what could be done with Spider-Man on a handheld, being little more than an evolution of the first movie game that’s only slightly better with issues that still aren’t addressed.

Spider-Man 2 on the Game Boy Advance does a much better job of linking itself to its source material, going as far to use still images from the console games FMV’s to communicate its story, but it still feels like more of a generic Spider-Man game than a movie game. This didn’t hurt the first game all the much, but it’s more noticeable in part 2, as they turn Doc Ock into more of a generic criminal overlord and there’s none of the drama between Peter and MJ, or Harry’s desperate quest to make Spider-Man punish for killing his father. Given that the template of the game hasn’t changed, this is another 2-D side-scrolling action game, it doesn’t hurt the overall product that much, but it’s much more noticeable this time around than in the first movie handheld game. 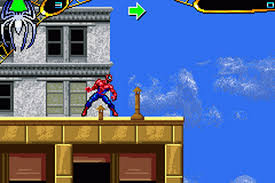 Hailing from the same developer, Digital Extremes, Spider-Man 2 doesn’t stray that much farther from Spider-Man (2002). It once again features open, non-linear stages where you’ll have to complete objectives like diffusing bombs, rescuing hostages or hunting down keys to unlock doors. The levels themselves still are highly detailed, as are the character sprites, however the levels are less busy for lack of a better word and are much easier to navigate and figure out where to go unlike those in Spider-Man (2002). An exception being the first stage where as Spider-Man you have to deliver pizzas like in the opening of the movie and you’re given an arrow to tell you where the pizza shop is, but not one informing you where the customers are. A few levels are almost cut-and-paste repeats from Spider-Man (2002), such as a level where you’re in a subway and have to dodge trains and another where you have to escape a collapsing building, but there are some standouts as well, mainly those revolving around Mysterio. Up until that point, and even after, you’re either in a sewer, the city streets, or a subway, but in the Mysterio chapter you’re thrown into an almost psychedelic world rich with colourful and bumpers that bounce you around like you’re in a Sonic the Hedgehog game.

Level navigation is much easier than in part one, though it also doesn’t quite address the collision detection issues that hurt Spider-Man (2002) either. A couple of stages have gimmicks like fans that prevent you from moving forward unless you crawl under them or zip between them, and you still don’t feel the precision that you should when performing this simple action; Spider-Man even does the full arch swing once again as opposed to just zipping between two points which is still a pain. A new traversal tool found throughout some stages are grapple points where you have to hit it with your web line, swing around in a circle and then launch yourself in a desired direction. It’s an interesting new idea on how to navigate the 2-D environments, and when combined with the bumpers that launch you it can make for some fun levels, but the lack of precision in your movements also make some of the more complicated sections a chore to get through as well.

Combat was simplistic, but also a chore in Spider-Man (2002) and here things are expanded upon with experience that can be gained from levels that can be used to buy power-ups and combos between levels, but they add little. I avoided buying any new moves and instead saved up for increase health, damage and movement speed which I accomplished pretty early. I only bought new moves towards the end of the game because I had built up points with nothing to spend them on. Spider-Man 2 axes the multiple web projectile types from the first game and I ended up using my projectile attack even less in Spider-Man 2 anyway. Unlike Spider-Man (2002), there wasn’t a boss in this game that you needed your webbing to beat.

Bosses didn’t offer any meaningful challenge in Spider-Man (2002) and I’m sad to say they don’t here either. Other than the Rhino who like always you have to get to run into a wall, the other villains, this time made up of Mysterio, Lizard, Puma and Doc Ock either have cheap exploits or you just spam attack until their life meter is draining, a strategy I employed for the final boss of the game. Like the first game also, collision detection in combat feels off, and until you get the increased damage ability, it’s best to avoid enemies unless you’re trapped in a room where you must fight in order to proceed. Otherwise you’re just mashing attack with no real feeling that you’re doing any damage while your power meter falls. 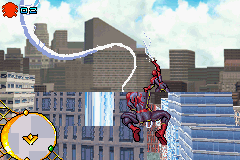 One of the more impressive aspects of the first movie Spider-Man GBA game was the pseudo 3-D bonus stage which is greatly expanded upon here in what I feel was the developer trying to have some form of parity with the console game, but the handheld just wasn’t meant to do this type of rendering. In the first game you were stuck high above the city at night-time swinging and gathering balloons, but in Spider-Man 2, you can go from street level, to the tops of buildings and even wall crawl up buildings. Other than one stage where you have to chase Doc Ock, something that should be more dramatic but it’s best to just run on the ground as opposed to web-swing, the only thing you really do in these stages is collect spider-emblems and go to your next mission point. While I admire Digital Extremes for making this work even at the level it does, this aspect of the game should have either been reduced or eliminated all together. The game runs so slowly in the 3-D stages and everything looks like it’s having do much difficulty trying to render that it also looks ugly as well. There’s no death states in this part of the game, so there’s that, but other than it being impressive to look at because it’s on the GBA, it doesn’t add anything.

Spider-Man 2, like the first movie Game Boy Advance game, isn’t a bad game, and while it corrects a few of the problems of predecessor, it doesn’t fix all of them and what you’re left with is just a slightly above average movie game. Some of the levels are creative, as are some of the new traversal mechanics, but everything still doesn’t feel as precise as what it could be and in a 2-D game, that’s very important. I admire Digital Extremes’ talented staff who were able to pull off a semi-open-world on the Game Boy Advance, however this section of the game comes off as more of a tech demo above anything else. Not the worst Spider-Man game by a long shot, but there’s a much better portable game that carries the name Spider-Man 2.