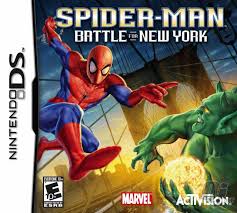 2006 was one of the strange years when Activision took a year off from making a Spider-Man console game, more than likely due to the fact that it had both Spider-Man 3, which debuted on over a half a dozen different platforms, and Spider-Man: Friend or Foe each set to be released in 2007. Just because a new Spider-Man game wasn’t released on consoles didn’t mean the character got to take it easy though, as another handheld title set in the Ultimate Marvel Universe, Spider-Man: Battle for New York, arrived in 2006. Since the release of the GBA all handheld Spider-Man games were handled by Vicarious Visions but for this outing, development duty fell on Torus Games, makers of my favourite Iron Man game, The Invincible Iron Man, for the GBA. Though the studio did show promise with the Marvel license in their Iron Man game, Torus Games’ Battle for New York is of the most forgettable Spider-Man games to date, even with the help of the technology that made Ultimate Spider-Man. 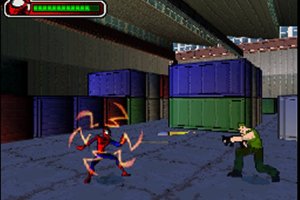 Battle for New York looks nearly identical to Ultimate Spider-Man, but looks they say, can be very deceiving.

While it came out after Ultimate Spider-Man and is set in the same universe, Spider-Man: Battle for New York is not a sequel to that game. Its story initially starts out with a loose retelling of the Ultimate Green Goblin origin from the first six-issues of Ultimate Spider-Man before it moves into a plot about Norman Osborn teaming up with the Kingpin to create a goblin army to overtake New York. Whereas the game that came before it felt like a true product of the Ultimate universe with its plot written by Brian Micheal Bendis and its art direction inspired by Mark Bagley, the only way you would know that Battle for New York is set in the same universe is because of the use of Ultimate Green Goblin, an African-American Nick Fury and a very brief cameo by the Ultimates. Similar to Ultimate Spider-Man it uses still images as cut-scenes to tell its story between levels, but the art is overly generic, lacking any real polish or detail and Spider-Man looks far too big and adult like at a time when he’s supposed to be a teenager. A plus is that the game does include voice acting from some pretty exceptional talent over those images including James Arnold Taylor, who voiced Harry Osborn on The Spectacular Spider-Man, as Spider-Man and Dave Fennoy, who you might remember as Lee from Telltale’s The Walking Dead, as Nick Fury, the only linking connection between this and Ultimate Spider-Man as he also voiced Nick Fury in that game.

Battle for New York’s story doesn’t set it up as a sequel to Ultimate Spider-Man, but in playing the game it feels like a poor expansion to 2005’s DS game. The graphics look identical and the game plays exactly the same with the same level objectives: fight some bad guys and save some citizens. Torus tried to make their mark on the formula by throwing in a lot more DS specific features other than swiping the touch screen to lift a pillar or car off of a trapped pedestrian but they’re very poorly implemented into the game and overdone. One is not too bad and just has you tapping on dots as they change colour to deactivate a machine, but another is absolutely pointless and frustrating. Enemies will continue to spawn through doors until you web them up and how you do this is connecting dots on a web on the bottom screen, however you’re expected to do this while enemies are attacking you and the game often doesn’t track easily you connecting a line from one point to another.  You do have the ability to snare enemies in your web, but they break out before you can finish the mini-game. Luckily for a lot of these you can just ignore them as they are never required to be closed to complete a level and it makes you wonder why they were bothered to put in the game in the first place. 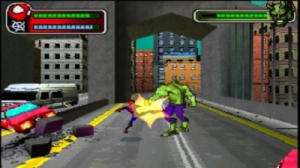 The first boss, also known as the point you realize the boss fights are incredibly broken.

Ultimate Spider-Man had its fair share of bosses but the bunch assembled here are pitiful. You have the Green Goblin and the Kingpin who are formidable foes and well-known members of Spider-Man’s rogues gallery, but outside of those two you only have Silver Sable who you fought in Ultimate Spider-Man, and..the…Simian? The boss fights are not only few in number, but they’re also made frustrating by terrible collision detection. When fighting normal stage enemies Battle for New York feels just as good as Ultimate Spider-Man, but when going up against the game’s bosses it feels like you throw too many punches and kicks before one connects. I died too many times at the first fight and eventually had to restart the game and allocate all of my experience points from beating the level before hand into my attack power to stand a chance, and this was only the first boss!

Venom shared the spotlight with Spider-Man in the previous game and Battle of New York has its own version of the heavy character in Green Goblin. Other than being much bigger and bulkier than the main playable character, the Goblin has the ability to throw fireballs in three different varieties which can be alternated: a small fireball, a three-directional attack and a larger, deadlier projectile. Using Goblin’s pyrokinesis depletes an ammunition bar with the attacks consuming more of your meter at higher levels so it’s normally best to stick with your lower level first fireball. Should you run out of power to use your projectile you can replenish it with power-ups obtained by beating enemies and you’ll want to manage this meter as best as you can as Green Goblin’s melee attack feels weak and unsatisfying. Compared to Venom who had puzzles and situations that used the character like using his tentacles to flip distant switches or picking up enemies with his appendages, Green Goblin feels like a wasted opportunity as they never use his powers for anything clever. The only puzzles you’ll encounter, if you can even call them that, involve you lighting beakers from a distance with your fireballs.

Spider-Man: Battle for New York uses the same technology that made Ultimate Spider-Man but just because it has the guts of that game doesn’t mean it has that games heart. Other than a few misplaced touch screen gimmicks this game is a poor rehash of a game released a mere year before it with worse collision detection and a lack of interesting bosses. The focus of the story on Green Goblin and even including him as a secondary playable character is a nice addition, but the game doesn’t really do anything interesting with the character other than the brief rehash of what people already experienced in the pages of the Ultimate Spider-Man comic books. Those looking for a worthy follow-up to Ultimate Spider-Man on the DS will find themselves quite disappointed with Battle for New York.