2017 feels like the year of second chances for comic book games: DuckTales and its sequel were made a lot more accessible thanks to the Disney Afternoon Collection: Battle Chasers was reinvented as an RPG after many years of the line being dormant and a series many thought would never see the light of day again, Marvel Vs. Capcom, similarly got a new entry last month. Something that was very surprising, yet welcome, to follow this trend is Rogue Trooper Redux, a remaster of the cult-favorite third-person shooter based on the 2000 AD property, Rogue Trooper. A lot of love has gone into bringing Rogue Trooper up to par with its contemporaries  on the market today, yet no matter how much developer Tick Tock has done to hide the fact that this is a game from two generations ago, it still feels like a game that’s over a decade old. Despite its somewhat dated mechanics though, Rogue Trooper Redux is very much worth making time for in this crowded holiday season thanks to its unique way in which it tackles the shooter genre.

Taking place on a planet dubbed Nu Earth that’s been so ravaged that it’s near uninhabitable, you play as a member of the Genetic Infantry, the titular Rogue Trooper, a soldier bred solely for war and to survive the harsh conditions of Nu Earth in an ongoing war between the Nords and the Southers. When the GI is seemingly betrayed and left for dead, the only surviving member is Rogue, as well as his three squad mates Gunnar, Helm, and Bagman who live on via special microchips in Rogue’s equipment. As a squad of many but an army of one, it’s up to Rogue to find out who is the traitor in the Souther army that signed the death warrant for the GI and get his revenge. Rogue Trooper never had the most original plot, but it’s compelling enough to see you through the short six-to-seven hour campaign and never takes itself too seriously. 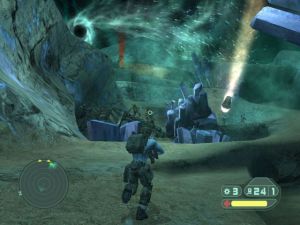 What’s best about both this Redux version of Rogue Trooper and the original game is how great a job it does at explaining the world of this property and then using its rules to make a unique shooter. In other shooters you pick up guns either in the environment or from fallen soldiers, but in Rogue Trooper, your gun is more or less sentient and can both operate on its own and morph into other tools to best fit your scenario like a shotgun for close quarters combat and a rocket launcher to take down enemy planes. As opposed to picking up clips, you pick up scrap in the environment and from fallen soldiers which can then be used to craft ammo, health packs and upgrades, contextually done via Bagman as your backpack. Helm living in your helmet can produced a holographic decoy of Rogue which can be used to confuse snipers and other enemies. These abilities aren’t thrown at you all at once, and are introduced slowly enough that you can grasp how to best use these move sets in combat.

Rogue Trooper can be described as a third-person shooter with a simple cover-mechanic, but secretly it’s almost a stealth puzzle game that still gives you the opportunity to unload clips of ammunition into enemies. There’s plenty of sections that can be beaten with some run-and-gun twitch shooting, but Rogue Trooper Redux is at its best when your cleverly using your tools to efficiently master each level and taking things slowly. It’s satisfying to set up Gunnar as a turret to provide cover fire to allow you to sneak around and get the drop on enemies after also laying mines as a trap for those about to rush you. Throughout the campaign Rogue Trooper Redux also introduces wrinkles that make it so you never get too used to one thing and force you to experiment like armored Nords who have to be disabled with an EMP like grenade and regular troopers that have a backpack that can disable your valuable sniping abilities. The best fights in Rogue Trooper Redux are when all of these elements mixed together and really test your understanding of its mechanics.

The original Rogue Trooper was released before the original Gears of War kicked off the cover-shooter genre that dominated a lot of games in the last console generation, and going back to it without having experienced it when it was new can be a little clumsy. It’s not unplayable mind you and still solidly put together, but how it used cover for example is archaic when compared to even the first Gears of War and Uncharted games. Tick Tock tried to modernize parts of Rogue Trooper in this remaster, but they don’t seem to fit the design of the original game and appear more shoehorned in than anything. When not in cover, you couldn’t zoom in your aim like you could in post-PS2 era shooters in the original and now you can, which is fine, but it’s at the same time not that helpful as enemies for the most part stand around waiting to be sniped and getting up close with any weapon is never a great tactic. It’s easier to get in and out of cover in Redux, but you can’t pop out of cover and shoot like the two mentioned examples, so it takes a while to retrain how you think a game like this should work. Something that should have been touched is how cumbersome it is to cycle through weapons. You have to go through them one-by-one in one direction only by tapping the triangle button and something like a quick weapon wheel like Doom (2016) would have been great for this game in sections where you have to quickly get to your rocket launcher mod.

More so than the mechanics, what puts the Redux in Rogue Trooper Redux is the visuals and in those respects, it really helps to make this game play catch up. Though set on a world destroyed by both pollution and war, Rogue Trooper Redux can be downright beautiful at times, especially when you stop to stare up at the night sky in areas when you’re outside. There’s a lot of bunkers, docks, and other facilities inherent with these types of games, but they’re balanced out by some of the more fantastical elements of the property that help the visuals from ever becoming stale. The character models have also gotten a major upgrade and immediately standout compared to those in the 2006 original and everything runs incredibly smooth, even on a regular PS4 (the packaging lists PS4 Pro enhancements that I have no way of testing).

Rogue Trooper Redux also has a co-operative online mode than can also be played solo where in one mode you have to defend a base and in the other you have to get through a level in an alloted time. Not being much for online games and not knowing anyone else who picked this game up on this console, I didn’t try them however I did check to see how many people were playing this game and the number was very low. Given the niche nature of a game like this, I wouldn’t expect the online to blow up.

Rogue Trooper Redux may be a game that some people simply might not be able to get into because it feels “old”, but those who give it a chance and stick with it will find a shooter unlike any other that is very much deserving of the second chance it’s getting. At a budget price ($39.99 retail in Canada; $33.49 on PSN), Rogue Trooper Redux is an inexpensive game compared to the big AAA games hitting the market this fall and the overhauled visuals and short-but-sweet campaign are worth the asking price alone. Whether you’re a fan of the original or have simply never played this game in any incarnation before, you should make time for Rogue Trooper Redux. I’ve reviewed this game on the PS4, but it’s also available on the Nintendo Switch which would also be a good home for this game given the lack of mature rated shooters on the system until Doom (2016) drops and Redux would also make a great game to play on the go.