When it comes to games, every superhero needs a studio that fits. Rocksteady “got” Batman and produced two critically acclaimed, game of the year candidates. The same thing could be said for Canadian developer Beenox, maker of the most recent Spider-Man games for Activision.

Making a good Superman game has been a tough job for DC. Not one videogame starring the Last Son of Krypton has been well received and the infamous Superman 64 is one of the most detested superhero games of all time.

Geoff Johns, current writer of Aquaman, Green Lantern and Justice League believes its just finding the right studio for the character. From Kotaku:

“I think all games come down to gameplay and the right studio. I’m sure the right studio could crack it. Rocksteady has a real passion for Batman, and I think that’s why they make a great game.”

In the interview he also let it slip that there is another DC property being given the videogame treatment. That property, Suicide Squad:

“We’re working on Suicide Squad; it’s in development right now…I’m really super excited about it. Because of the concept, you have a game where any of the lead characters can conceivably die and it’s not a stunt. Some really cool story could come out of that.” 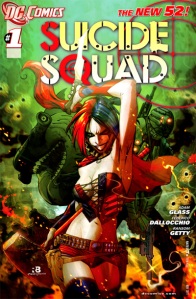 When It comes to Geoff Johns, it’s pretty safe to trust the guy. This is the guy who made Aquaman cool after all. Now, when do we see this Suicide Squad game?