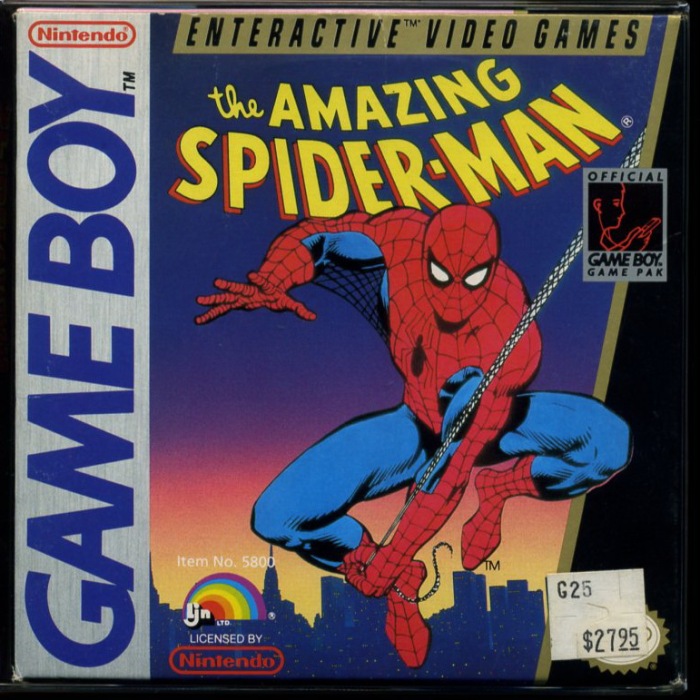 I don’t know if I can speak about this game without wearing rose colored glasses as this game holds many cherished memories for me. As a kid, I loved Spider-Man. I loved the comics, I loved the cartoon and then I got to play a game featuring him on my Game Boy. I played through this game a lot on many a camping trip, and in fact this was the first game I ever owned featuring a superhero. But I digress….

…yes, that Rare. The people who made Donkey Kong Country, Killer Instinct and Goldeneye made a Spider-Man game for the original Game Boy. Let that sink in for a minute people.

The plot of the game is that Mary Jane has been taken by some of Spidey’s most dangerous rogues (Mysterio, Hobgoblin, Scorpion, Rhino, Doctor Octopus and Venom) and he has to get her back. Interestingly enough, in the booklet it lists the level two boss as Green Goblin, but at the time both versions of the character were deceased in the comics and the decision was made to change the boss to Hobgoblin. Must like ROTSS, the game is composed of six levels ranging from alleys, rooftops, central park and the sewers. Levels two and four had a bonus section where you have to crawl up a wall to reach the rooftop while dodging projectiles and enemies attacking from the windows.

That’s my copy of the booklet FYI. I still have it after all these years.

One of the things I find charming about the game is the “cut-scenes” between levels. It seems Spider-Man has a phone line that connects him to the six villains, and they exchange banter before you start the levels.

When I talked about ROTSS, I stated how difficult it must’ve been making Spider-Man work with only two buttons, but Rare did a fairly decent job  in this game. They wisely left the wall crawling to the two above mentioned bonus stages, and managed to pull off several different functions for each of the two main buttons. You use A to jump, but if you hold if longer you can jump higher and web sling. B is your standing punch or crouching kick, but if you keep it depressed to certain degrees you can fire a web projectile. The size of your projectile is dependent on how much you hold down the B button, and can range from a tiny bullet to a half a screen size web. When using the web for either swinging or attacking you have to keep an eye on your web fluid gauges, but additional cartridges can be collected by beating enemies.

The bosses are fun to fight, but not that challenging. They have patterns you can recognize and exploit with the exception of the Rhino in level four, I could never quite got the through him without taking some damage. He charges at you and you can crouch and kick and have him run through you without getting hit, but I could never get the timing down exactly. Anyone who has played the game can leave me some advice, or ask me for help with any of the other five bosses.

TASM is not an overly long game, the levels are short and the game can be beaten in about a half hour or less once you get good at it, which can be a good thing when you think about how this is a supposed to be a portable game. Once it’s completed, the most you can do is shot for a high score, or see how far you can make it without using a continue. I personally have a huge soft spot for this game, and though no one may like it as much as I do, it’s a pretty decent representation of Spider-Man on a handheld.

One thought on “REVIEW: THE AMAZING SPIDER-MAN (GAME BOY)”