Upon it’s release in late October last year, I never did get around to composing a proper review of  TT Games Lego Marvel Super Heroes. Initially I played on the Xbox 360 and put in the time to reach the coveted 1,000 Gamer Score and more recently I picked it up for my brand new PS4. Despite having played the game to the point where I had literally done every conceivable goal possible, I did it all again. At that point it dawned on me that Lego Marvel Super Heroes truly is something special in the canon of Marvel themed video games, and may in fact be the single best Marvel comics game to date. As opposed to writing a review providing the many praises many have already lavished on the game, I present ten reasons why Lego Marvel Super Heroes is the best Marvel game ever.

(NOTE: THIS LIST IS NOT IN ANY PARTICULAR ORDER)

Having played through this game to completion twice now, you cannot accuse TT Games of not giving your moneys worth in this game:  On top of the 15 story missions that can be replayed for additional collectibles, you have 11 bite sized missions as well that are unlocked by completing tasks in the open world New York City area. NYC is littered with citizens to aid, races to compete in and crooks to beat down. That’s not including the 150 playable characters to unlock and numerous vehicles to purchase. In total you’re looking at over 30 + hours of Merry Marvel Madness and you’ll still be wishing there was more when you’re done!

Lego Marvel Super Heroes supports a roster of 150 heroes and villains ripped from the pages of comics, your favorite animated series as well as films with some having alternate costumes and transformations. If you can’t find your favorite among the roster, well, you may want to reconsider playing a game called “Lego Marvel Super Heroes.” Every corner of the Marvel Universe is covered from the teams (X-Men, Avengers,) the stars (Spider-Man,) and the rather obscure (Howard the Duck?) Stan Lee himself even gets in on the action in his “Stan Hulk” persona. 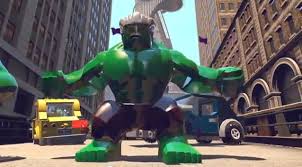 New York City is a big place, even in Lego form, and with all that can be uncovered in this game, getting around is rather important. Sure, you can always “borrow” one of the many citizens vehicles, or call in your own from your collection of cars, jets and boats, but this is a super hero game! Whether you’re web-slinging through the sky as Spider-Man, soaring through the air as Iron Man or rampaging through the streets as the Incredible Hulk, Lego Marvel Super Heroes lets you get around as only a super hero can.

Marvel has defintely brought in a lot of fans over the past decade due in no small part to the Marvel Cinematic Universe, however before any super hero ever graced the silver screen, they were comic book stars first and foremost. TT Games could’ve easily just populated their game with characters that were more familiar with the mass media audience, but they chose to embrace the Marvel Universe as a whole with characters familiar to comic fans like Moon Knight or Squirrel Girl, the X-Men in their classic 90’s outfits, and unlike the movies, all can play together.

A lot of the times when super heroes are adapted into other mediums, like a video game or film, their status quo will be made more similar to how most people remember them. For example, J. Jonah Jameson will be the owner of the Daily Bugle and not the mayor of NYC, Peter Parker will be a freelance photographer as opposed to working at Horizon Labs and the X-Men will be one team as opposed to splintered. Inserted in this game are characters that only appeared recently in the pages of Marvel Comics, like the Superior Spider-Man, as well as landmarks like Horizon Labs that was introduced in writer Dan Slott’s work in the pages of Spider-Man and the bleeding edged heroic age suit for Iron Man.

Playing this game is like taking a whirlwind tour through the Marvel Universe. In the open world section alone you’ll be able to drive up the doors of the Baxter Building (home of the Fantastic Four,) fly to the top of Avenges tower and the Oscorp building only to then do a fly by of the X-Mansion’s lower levels. That’s not including the main story missions that will transport the player outside of New York to more fantastical locations like the realm eternal Asgard, and Magneto’s space station base, Asteriod M, among others.

4) MIXING THE LOCAL WITH THE COSMIC

A lot of heroes in the pages of Marvel Comics live and defend the city of New York, and the same can be said of a lot of characters in Lego Marvel Super Heroes. What makes Marvel comics so special is how the heroes that are more grounded in the real world and science mix with the occult and cosmic. Lego Marvel Super Heroes allows you to pair up a street level hero like Daredevil and the Silver Surfer,  Thor with the sorcerer supreme Dr. Strange, or assemble the up and coming stars of the Marvel films series, the Guardians of the Galaxy.

What has made the the Lego games into one of gaming’s largest franchises is their ability to put a smile on the players face. Jokes come from all angles in Lego Marvel Super Heroes, whether it’s the wacky antics of Deadpool in his missions, Captain America being puzzled why Green Goblin is going to a “reputable” business like Oscorp or Galactus’ “om nom nom” chewing, if you don’t at least smile, you may want to consult your doctor. Some of the best moments occur in the open world where the residents of New York are more than happy to turn over their vehicles for a super hero and when they get a characters name wrong when passing by (“Hey, it’s Wolfmarine!” when you pass by as the X-Man Wolverine or “Look, it’s Metal Man” referring to Iron Man.)

Of course the mark of any great super hero game are the super powers, and they’re out in full force here: the strength of the Incredible Hulk, the mighty shield of Captain America, the mind control powers of Jean Grey, the elasticity of Mr. Fantastic, I could go on for ages but the point is that everything you can do with your characters is simply astonishing. The best part is that even though a character like Hawkeye or Black Widow shares space with a cosmic force like Galactus, they still have a role to play in missions and puzzles in NYC.

1) FOR FANS OF COMICS AND FILMS ALIKE

The Lego games are great for families, kids, and fans of all ages. Lego Marvel Super Heroes not only embraces that as per usual, but is also accessible to any combination of Marvel fans. Huge comic fan? You’re covered. Only watch super hero films? That’s okay to. There’s so much packed into this game that it’s impossible for anyone to feel left out.