1997 was a HUGE year for the Spawn franchise: the comic book series was at the peak of its popularity, action figures featuring the character lined toy shore shelves, the HBO series debuted to an overwhelming positive reception and the first (and to this date, only) live action film featuring the anti-hero graced the silver screen. On top of all of that, the second Spawn video game, Spawn: The Eternal, for the relatively new Sony PlayStation would arrive in time for a holiday season.

Developed and published internally as a first party title by Sony, Spawn: the Eternal is a horrid amalgamation of the exploration of the original Core Design Tomb Raider games and Namco’s one-on-one fighting series Tekken…if both of those franchises were of the worst games you’ve ever played.

Featuring no story to speak of, STE puts you in the shoes of three different eras of Hellspawn: Al Simmons in the present day, Medieval Spawn and Savage Spawn. The division of the eras is one of the shining points in the game, as it gives a variation of the environment types and character models, though all play exactly the same anyway. Unfortunately the game doesn’t really provide a reason as to WHY you’re playing as multiple Hellspawn, or if you’re the present day Hellspawn inhabiting the persona of a past incarnation.

You start off the game as present day Spawn in a four walled room with a the insignia of the Hellspawn on each of the walls. Upon checking each, you find that one opens to the streets of New York and there you start the first several levels. After you finish the first stages in this section, you’re sent back to the room and a new era makes itself available. The second character you play as is Medieval Spawn, followed by Savage Spawn and then you finish the game off as Al Simmons.

STE is primarily a third-person adventure game clearly taken inspiration from, as stated above, Tomb Raider, which is a compliment of sorts to that series as it was of, if not THE, most popular franchises on the PlayStation at that time. The levels themselves are simple in their objectives: collect a key, throw a switch to unlock a door and then exit.

The problem most of the time is the placement of the camera, in that it’s position way too close to the awkwardly moving Spawn. You won’t notice it early in the game, as the stages are primarily exploration based, but progression soon becomes heavily reliant on awkward plat-formig segments, infuriatingly so in the last set of stages. It’s hard to gauge where you’re jumping and it leads to way too many cheap deaths. You can scan your environment in first-person, but it doesn’t help in the slightest when you have to actually make your jump. Luckily you can quick save whenever you want, so you won’t be set back too far as long as you save often, but you’ll still be staring at a “Now Loading” screen far, far too often. It doesn’t help that either the jumping physics or the controls are overly tight as well. 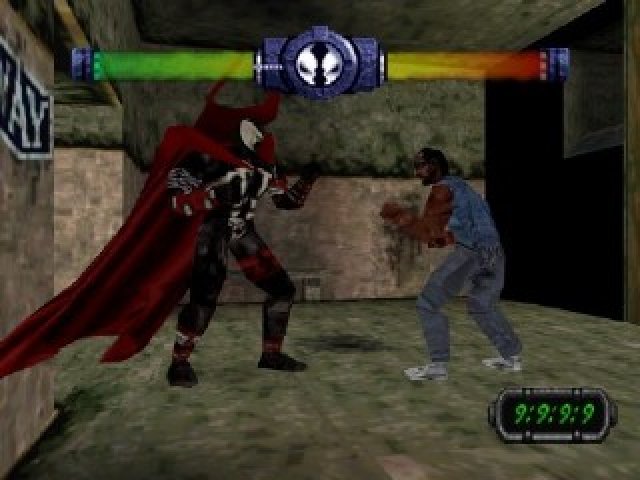 When not missing jumps, hunting for keys or flipping switches, you’ll engage in the games broken combat system. Upon encountering an enemy, whether it’s a boss or regular enemy as both encounter types are the same, the game transitions to a one-on-one 3D fighting game complete with poor collision detection and special moves too useless to be effective. There are combos you can pull off, but success is best derived when you randomly hit the attack buttons. Special attacks can by used that either consume collectibles or your 9:9:9:9 magic meter, but good luck pulling any of them off in the heat of combat. This is also the only time you’ll see any Spawn in their trademark cape, which is unfortunately understandable given the fact that it would eclipse the entire character in the third-person perspective.

While I do lament the combat, there is an aspect I did appreciate. One of the moves in your arsenal is ripping the arm off your combatant and then using it as a club against them as their power slowly drops. Immaturely, I did this often while saying “stop hitting yourself!”. Hey, in Spawn: The Eternal, you’ve got to make your own fun.

This game is by no means a sequel to the unappreciated Spawn on the SNES but the concept of the depleting magic meter also carries over from the comic series. The problem with the implementation here is that your magic consumes way too fast compared to the amount of items you can collect to replenish it. The combat portions can take a huge chunk of your life away and you can quick heal by hitting the L1+L2 buttons simultaneously. By the time I was done the first set of levels in the present, I was down to less than 2,000 in the number department with three more full eras to go. In order to complete this game for review, I reluctantly had to resort to cheating to see all the game had to offer (BTW, full health = Hold L1+RI in the pause menu, then x, circle, triangle, square, x, and finally circle). In many ways it didn’t feel like cheating, as the odds are unfairly stacked in the games favor.

When people scoff at licensed video games, it’s game like Spawn: The Eternal that cause that reaction. Other than a small bit of humor I had with my own childish imagination, there is no enjoyment to be had here. The levels are boring, the plat-forming is awful, the combat is non-functioning and there is no story to speak of. Al Simmons entered Hell, and what he saw was not the eyes of the Devil, it was this game.

One thought on “REVIEW: SPAWN THE ETERNAL (PSOne)”