The year is 1995, and if you were anything like me, you loved nothing more than getting your hands on that newest SNES game, especially in the fall of the year when all of the big games dropped that were competing for that coveted place on your Christmas list. Being an experienced game renter, or buyer, one particular logo on a game would raise a mental red flag to take off in the other direction, especially when it came to licensed games…

Okay, that’s not fair, Acclaim DID bring us the home versions of Mortal Kombat 1 and 2, even Maximum Carnage, but the name normally meant poison for your precious SNES or Sega Genesis. One game that was an exception to that rule, however, is none other than Todd McFarlane’s Spawn: The Video Game (referred here on out as “Spawn”, because face it, it’s shorter). In my own opinion, it was a great start to the Spawn video game franchise that it hasn’t quite lived up to since the 16-bit era, even with the advancement of hardware.

One of the factors that probably made Spawn stand out against titles like Batman Forever and Bart’s Nightmare was that it was only published by Acclaim, not developed. The studio that crafted Spawn was now de-funct Japanese developer Ukiyotei, who also made the SNES version of Hook, and the cult classic Skyblazers, a game brought to my attention thanks to the YouTube comedy group Game Grumps.

While Spawn was not built by Acclaim, it does share some of the companies DNA from that era. Spawn has a wide variety of basic attacks that use every button on the SNES controller, including several degrees of punches, kicks and a block, similar to Mortal Kombat. The variety is welcome, but the extra attacks seems unnecessary, especially when you can beat the game with your mighty spin kick. By jumping and hitting “Y” (in the default controls) you either spin in place or perform a devastating spiral attack when modified by hitting forward. Believe me when I say, the best way to take out every enemy and boss in this game is by using these tactics. It’s even better than the magic based attacks you can perform.
Continuing on with the Mortal Kombat theme, Spawn can use various magic spells by entering fighting game like combinations, allowing you to heal, teleport for a short distance or fire projectiles. Pulling these off in the heat of battle is a bit tricky, and I wish the input detection was a little tighter, in particular healing during boss fights. That being said, you’ll want to hold off on using your magic through a lot of the game.

Taking a page from the fiction of the Spawn comics, you have a 9:9:9:9 meter that depletes each time you activate your magic. If you get really deep into the game with little magic, the difficulty of the game increases exponentially. The best tactic is to hold off as much as possible to save recovery until the last series of bosses. When you die, you lose a tiny bit from the number but not as much as flat out healing yourself, and the game does a good job of check-pointing your progress such that you won’t be set back too far. You can replenish your magic somewhat, by defeating major bosses and by finding items in the levels, but it’s still best to ere on the side of caution.

One of the things Ukiyotei nailed in Spawn was the look and feel of the comics, especially in the character of Spawn. The model looks great, and I love that this is the only game starring the character where he’s always wearing his iconic cape, my personal favorite aspect of his design. Often I would just find myself jumping and holding down the “B” button to watch the character slowly descend with the animated ripple on the cape. 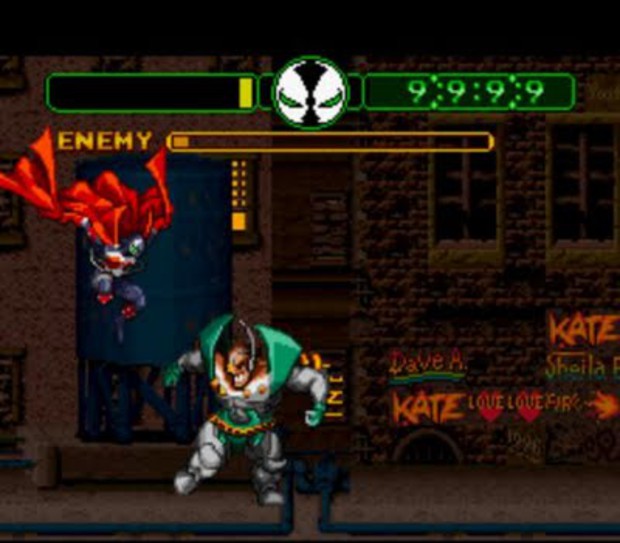 The levels themselves also fit in with the world building, starting off in the grungy alleys of New York and moving into the bowels of Hell itself. The game transitions well from the real world to the demonic world with some nice between level still shot cut-scenes that tell a pretty decent story for a 16-bit era action game; starting off with a plot about the abduction of children before developing into something far more sinister and grand in scope. The game’s soundtrack also pleasantly adds to the games dark, Gothic nature, further evoking the tone of the series.

Some of the more popular villains from the comic, including Overtkill, Redeemer and the Violator also make appearances as boss encounters organically woven into the story and never seem like they’re around for the sake of a bullet point on the back of the games packaging. Though she only appears in cut-scenes and never as an in-game model, this is also the only Spawn game ever to include Angela.

Outside of the adversaries from the comics, you’ll also contend with bosses created specifically for the game. They range from outright easy, to challenging and extremely annoying, specifically one boss in Hell that takes up the entire screen. The goal is simple: the enemy has clearly marked weak points that have to be destroyed all around his body. Easy in practice, but you have to be very mindful of the pattern, else you’ll be crushed and have to start over from the beginning.

Spawn: The Video Game is not without its faults, but there’s far enough good in the package to outweigh the bad. Fans of the comic, or even great 16-bit action games should defiantly find a place in their collection for this SNES gem of a game.