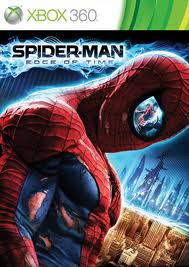 When it was initially announced, Spider-Man: Shattered Dimensions from series first developer Beenox seemed like a game hinged on a flimsy gimmick for the purpose of injecting life into Activision’s fledgling but once renowned series of Spider-Man games. Upon its release, Shattered Dimensions turned out to be a really great game, presented as a love letter to the Spider-Man character through the ages that not only proved the skeptics (like myself at the time) wrong, but cemented developer Beenox’s position as the new go-to Spider-Man studio. Unsurprising given the game’s success, a sequel was commissioned that would continue the trend of featuring multiple Spider-Man, reducing the number by half from 4 to 2 and would arrive a mere 13 months later.

Edge of Time opens in a rather “shock”-ing way (hehe): it starts with the original Spider-Man meeting his end at the hands of his long time nemesis Eddie Brock in his Anti-Venom persona. This event is witnessed in the year 2099 by the Spider-Man of the future, Miguel O’Hara (Spider-Man 2099 to you and me, folks!) who uncovers a plan set in motion by one Walker Sloan of the Alchemax corporation to disrupt the time stream and set up the evil conglomerate in our time. In order to stop Sloan’s plans and prevent the death of the classic Spider-Man, it requires once again the efforts of multiple Spider-Men, from the past as well as the future.

The story for Edge of Time was written by legendary comic writer Peter David who created the character and world of Spider-Man 2099 in the 1990’s, and it is David’s exceptional story, quite possibly one of my favorites ever in a Spider-Man game, that will make you not want to put down Edge of Time. Even though both the Spider-Men presented here were in Shattered Dimensions, their personalities are far more in line with how you envisioned them in the comic pages, especially Spider-Man 2099. In Shattered Dimensions, Miguel came across as another palette swapped wise-cracking Spider-Man from the future, but he’s presented here with more of a no-nonsense personality that plays off extremely well with the optimistic, wise cracking attitude of present day Spider-Man.

It’s not just Miguel who shines, though this game and David’s story were what sparked me to fall in love with and get acquainted with Spider-Man 2099 comics, but Peter Parker as well. For year’s there has been plenty of Spider-Man games that showcase what Spider-Man can do, but never really one that showed why he does what he does, and it’s the why that’s really important. Peter Parker is a character who will not stand idly by while others are put in danger, a reason he took on the mantle of Spider-Man in the first place, and even knowing he may die in the process, he will not turn away from his responsibility as Spider-Man. Then again, he’s also a  character with a large guilt complex that often causes him great doubt in his actions, even wondering if the present day and even his loved ones are better off without him at all.

This material wouldn’t be nearly as effective without the voice talent between the two Spider-Men. Josh Keaton moves from the role of Ultimate Spider-Man in Shattered Dimensions to the Amazing Spider-Man here and Keaton, who first voiced the character in the Spectacular Spider-Man animated series, wears the role like a glove. What Kevin Conroy is to the role of Batman, Keaton is to Spider-Man, and it’s such a shame that he didn’t get nearly enough time with the character.

Playing off superbly with Keaton is Christopher Daniel Barnes who switches from the role of Spider-Man Noir, the most beloved character in Shattered Dimensions, to Miguel O’Hara. Barnes to is a Spidey veteran, recording over 60 episodes of the character in the 90’s Spider-Man animated series, and suits the character much more than Dan Gilvezan did in Shattered Dimensions. It helps that two have excellent chemistry to the point where I found myself laughing out loud at their banter.

Story and performances are one thing, but this is a game after all. Edge of Time is no doubt about it a quickly turned around game, but it’s not as bad as some of the major gaming review sites will lead you to believe. This game may be in fact something that feels better having played the last two outings from Bennox, The Amazing Spider-Man 1 and 2, as the offense heavy fighting feels much more gratifying than their attempt at emulating the “Arkham” combat in their movie tie-in games. The two heroes fighting styles feel more unique than in Shattered dimensions, a complaint I have with that game, though they do share a lot of similarities to make the transition between them feel comfortable.

Miguel favors bringing enemies up close for aggressive hits and can create a decoy to confuse enemies with his ability (activated with a flick of the left trigger) while Peter prefers to quickly get up in an enemies face by web-zipping into them and using his spider speed to avoid getting hit, also turned on with the left trigger. Both characters can use their abilities to solve simple puzzles: 2099 can use decoys to reroute missiles and Amazing can move through laser grids. By building up enough portal energy, this games equivalent of your God of War-esque “Rage of the Gods” meter, you can freeze enemies in a time bubble to unleash a fury of powerful hits.

The emphasis on combat removes a lot of other Spider-Man like activities, mainly web-slinging which you don’t do a lot of, but it feels as satisfying as a lot of other character action games and even better than a few as well. Unfortunately some of the other areas where the gameplay is broken up a little, mainly the frustrating free fall sections with Spider-Man 2099, are not as polished as when you’re trading blows with bad guys. The game establishes that the time storm has created a link between the two times where an action in one affects the other, but this is rarely implemented into gameplay other than say, smashing something in the past to open a door in the future.

Given that this game was turned around in such a quick time, it’s a sad understanding that it would lack the polish and balance that Beenox showed off in Shattered Dimensions. The first thing that immediately suffers is the setting. You play in both the modern-day and 2099 eras version of the Alchemax lab facility, though both share the same generic tropes as most other video game science labs. The building for the most part is far too claustrophobic for a character as energetic as Spider-Man.

Another area that is rather anemic is the amount of villain characters. Shattered Dimensions featured a wide variety of villains across its four periods but Edge of Time only has Anti-Venom and Black Cat from the comics, and the game exclusive Atrocity and CEO. The fights are not paced well across the short adventure, nor are they very memorable. Black Cat in particular is feels little more than a regular enemy that takes longer to go down.

One of my favorite parts of Shattered Dimensions was the extra optional challenges you could try to beat to earn extra currency for upgrades and costumes. They return here in Edge of Time, but they feel more unfairly stacked against your favor. The combat challenges are okay ( beat so many enemies without taking a hit, build up a certain combo number,) but traversal challenges (not getting hit during a free fall or collecting so many orbs in a room before time runs out) seem to start before you can even see the way to go, let alone gather extra collectibles. It really makes you miss the complete them at your own pace challenges Beenox cleverly implemented not one year prior.

Beenox also ported the Edge of Time experience to the Nintendo 3DS handheld and it many respects it’s both impressive and a let down. Impressive in that they managed to squeeze the entire experience, cut-scenes, voices and all to the system. Getting this to work did require a lot of sacrifices, however. For one the colors, especially the red on Spider-Man’s costume looks very dull and doesn’t quite “pop.” Secondly, the second stick for camera adjustment heavy experience isn’t best suited to a system where the you have to stop moving to adjust your perspective with the D-pad exclusively. This was a game that was more than likely deeply in development before the announcement of the circle-pad pro accessory and does not support that peripheral, but if it was the case where it did, it would be instantly more recommended and an excuse to buy that add-on.

Adjusting your expectations accordingly will determine whether or not you want to dive into Edge of Time. If you’re in the camp of playing Spider-Man games to simply swing around, you would do yourself a favor to look elsewhere. If however, you think the idea of a really good Spider-Man story built around a fun combat engine is something you can live with, I urge you to pick this game up. I really wish that Beenox had been given enough time to properly develop this game like they did with their first Spider-Man outing, either that or Activision has promoted this game as an expansion, like a Dragon Age Origins: Awakening, perhaps even at a discounted price. Edge of Time is probably one of the best Spider-Man stories in a video game that is at best an above average game, destined to be a sub-par follow-up like Spider-Man 2: Enter Electro before it.