Spider-Man 2 is the losing your virginity of Spider-Man games: You’ll never forget your first time, but it will never be your best time.

No one can take credit away from Treyarch for what they accomplished in Spider-Man 2. They were the first developers to give us a video game where we can swing freely around an open world New York as Spider-Man, in a movie tie-in game no less! It became the standard that every Spider-Man game after it had to meet. The experience however, is not one that’s aged well over time.

I missed Spider-Man 2 when it came out in 2004, probably as I was far too busy playing my copy of the MegaMan Anniversary Collection over and over, but I remember having conversations with my brother wherein he would tell me that he would come home and just lose himself for hours in the game, doing nothing more than just swinging around the game’s New York play ground setting. I did catch Ultimate Spider-Man a year later, also from Treyarch, as I was a fan of the Ultimate Spider-Man comics series and loved the cel-shaded look of the game. Admittedly, I found the game quite frustrating back then, but in the years since its become one of my favorite Spider-Man games, in fact my favorite open world Spider-Man game to date.

Having no nostalgia to cloud my experience, I picked up a copy of the Xbox copy of the game to play on my Xbox 360 and…I…don’t like Spider-Man 2. Blasphemy, I know. How can you run a website about comic book games and not like one of the most well-loved comic book games of all time? As I stated above, I give the game credit, the same way I can give a movie like Prometheus credit for looking nice despite making no sense whatsoever. The swinging is amazing (no pun intended) and it requires a lot of skill and patience to master. Everything else though, is pretty lackluster. The voice acting from Tobey Maguire is phoned in and awkward, the bosses are either forgettable or frustrating (except for the one with Mysterio, you know the one I’m talking about, if not I won’t spoil it for you,) the combat is loose and unsatisfying and the side-missions are either boring, repetitive or both.

I’ve played and finished every Spider-Man game on consoles from 2 onwards (with the exception of Spider-Man 3 on anything other than the Nintendo DS, aside, that game is awesome) and in the case of the open world games, they’re all better than Spider-Man 2 as everything else is tighter: Ultimate Spider-Man’s swinging feels good, and you can get in and out of  crime missions so much faster that it furthers the immersion of Spidey swinging in to save the day then going about his business. Web of Shadows, the last non-movie open-world Spider-Man game, further refined Spider-Man 2’s web-slinging mechanic but with a much tighter combat engine. Beenox’s The Amazing Spider-Man games have had their problems, no swing anchoring in part one and an annoying morality system in part 2, but the best thing you can say about both is that it’s fun to get around as Spider-Man.

The problem is that since Spider-Man 2, developers have been trying to refine interactive web-slinging to the detriment of everything else. These games are all more or less the same thing as Spider-Man 2 without fixing any of the problems that the game has always had, being everything is terrible but that one part. Spider-Man 2 takes its place in the history books for evolving Spider-Man games in a way that no one had tried before, but no one has gone that extra step further in the franchise since then.

Which leads me to my next point: Is the open-world structure holding back Spider-Man games? A case could be made that it is. So much time and energy is put into being the best swinging game in town that it always seems like there isn’t time left over for anything else. “Oh God, we ship in a month and we don’t have anything else done but the web-slinging. Quick, throw in some bad guys to punch and some familiar villains” is a comical exaggeration of how I see development of a post-Spider-Man 2 game going.

Back before technology allowed Spider-Man to venture into the open-world space, developers like Neversoft and Vicarious Visions had to get creative with the character and I think that’s what makes those games still fun to play today. In particular Spider-Man 2: Enter Electro, for even though it isn’t a better game overall, I liked the constant changing of environments and scenarios you find yourself in, especially the section where you have to use your webs to slow down an out of control plane. 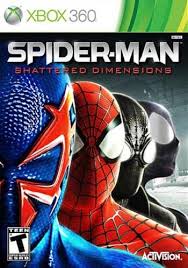 The same can be said for Shattered Dimensions, as by taking away freedom, Beenox forced themselves to get creative with restriction. This brought us the spectacular “Noir” black-and-white sneaking stages, the exhilarating Sandman boss fight where your’e trapped in a sand tornado, or the Deadpool level where you have to escape from a tidal wave and an overturned tanker. Edge of Time for all it’s problems still had a story that was far more engaging than anything found in all of the open-world Spider-Man games combined.

I’m not wishing away the idea of Spider-Man being a killer open-world game, I just wish that developers would find someway to marry the well designed levels of a linear Spider-Man game with the traversal of an open world game. When it was announced that Beenox was trying moving into an open New York playground in The Amazing Spider-Man, I was optimistic that they would be able to bring what they learned from Shattered Dimensions and Edge of Time to that game, but was left disappointed in the end, even more so with The Amazing Spider-Man 2.

We’ve come along way since 2004’s Spider-Man 2, and as long as people keep looking back to that game for inspiration, the more likely it is that we’ll never again play a Spider-Man game that redefines how the character plays. Somewhere in the middle between full open-world and tightly constructed levels lies a Spider-Man game that’s waiting to be developed and put into our waiting hands.