Today marks the fifth anniversary of the 2009 release of Batman: Arkham Asylum, the Batman game that changed the way we look at comic book games and in many ways lead to the development of this site. A lot has happened in five years for me: I’ve changed jobs, friends have gotten married, people I know have had children, but more importantly we’ve seen three other “Arkham” games with a fourth on the way.

To celebrate this landmark occasion in the “Arkham” franchise’s history, here’s five of my personal favorite Arkham Asylum Memories.

Leading up to the August release of Batman: Arkham Asylum, I wasn’t particularly following the game but caught up in the pre-release buzz on a lot of video game sites and podcasts. Curiosity taking over, I downloaded the demo for the game on my PS3 and found myself enjoying everything about it: the combat, the traversal, the stealth, hearing some of my favorite voice actors from the heyday of DC animation reprising roles they made iconic, it was nothing short of spectacular.

There was one moment however, where it pushed me over from curious to a “I NEED TO GET THIS GAME!!!” level of fever. I positioned Batman upon a gargoyle in the predator sequence in the demo and watched as a terrified Joker goon walked under where I was perched to have a prompt come up on the screen stating “triangle for inverted takedown.” Following this instruction, I watched Batman swoop down, grab the unsuspecting victim and strung him up to leave a message to everyone else in the room that I was not to be trifled with. It was at that point that I knew somehow, I absolutely needed to have this game in my library.

In the age we live in today, it’s impossible to keep anything a secret, especially when it comes to things like movies, TV, comics, and especially video games. It was a surprise to many, even though the first teaser went live for Batman: Arkham City in the 2009 VGA’s mere months after the release of Asylum, that the seeds were already planted within the foundations of Batman: Arkham Asylum for its follow-up. What’s even more surprising is that this was not uncovered until many months after Batman: Arkham Asylum was on store shelves.

When you have the explosive gel tool in your arsenal, you visit Quincy Sharp’s office and use the tool to unlock a secret room not seen in the map that shows the future Mayor’s plans to wall off the criminals into the city wide mega prison facility. Given that today’s players uncovered the mystery within the interactive “P.T.” teaser in less than a day, something developer Hideo Kojima (Metal Gear Solid) thought would take weeks, this secret is probably one of the last ones that reminded us of finding things out about our favorite games months, or even years down the line in the pages of our favorite magazines. 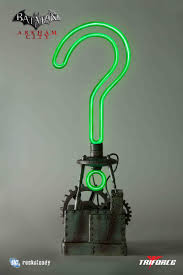 Collectibles and video games go together like peanut butter and jelly, but some developers go the extra mile to make spending the extra time looking under every nook and cranny for trinkets worthwhile. Uncovering the interview tapes, the chronicles of Amadeus Arkham and solving the Riddler’s puzzles scattered all around Arkham Island provide so much juicy information on the history of the Asylum, its inhabitants, and provide a Batman history lesson for those who may only know Batman from animated series and films. You may enter the Asylum being a casual Batman fan, but by the time you make your way out, you’ll know more than you ever wanted about the Dark Knight; You’ll also love every single minute of it.

Batman has one of the most recognizable rogues gallery in the world of comics, but how do you go about making a bunch disfigured psychopaths interesting boss fights? This sentiment rings true perhaps most for one of Batman’s most famous foes, Edward Nygma, AKA The Riddler. Not once in Batman: Arkham Asylum do you actually see the Riddler, but his presence is felt throughout the game almost from the very start. As opposed to matching fists with the character, you uncover hidden items and solve riddles pathologically left behind by the Riddler, making Arkham Asylum in many ones one long boss fight with him where you match brains over brawn. This inclusion not only does justice to the quirks of the character he’s most known for, but it also provides a reason for Batman to be hunting down  hundreds of question mark shaped trophies when he should really be focusing on hunting down the Joker and stopping his plans to create Titan enhanced soldiers.

People remember Batman: Arkham Asylum for a lot of things: the free-flow combat, stalking bad guys in the shadows, the compelling story, but above all the moments that stand out the most in the entire experience are the Scarecrow encounters. On your first play through of the game, you’re not even quite sure what’s transpiring until you see Bruce Wayne’s parents rise out of a body bag and start talking to you, only to be transported to a nightmare realm where you have to avoid the Scarecrow’s gaze or trapped forever in your own mind. The best use of the character is an Eternal Darkness like insanity effect where you’re convinced the game has crashed. The opening starts repeating itself with the Joker behind the wheel of the Batmobile and him escorting Batman through the halls of the titular Asylum, letting you play out one of Batman’s own personal greatest fears in a chilling way.

What are some of your favorite Batman: Arkham Asylum memories? Agree? Disagree? I want to hear them in the comments below.