Given that The Flash is the fastest man alive, he comes and goes in the blink of an eye before anyone knew he was even there. The same could be said about the first attempt at a Flash TV series in the early 90’s, which lasted only a season due it being shuffled around to various time slots on the CBS network where it originated. Something that disappeared into the vapor so quickly that many, including myself until earlier this year, didn’t even realize it existed was the Game Boy game published by THQ based on the likenesses of the characters as they appeared in the ill-fated series. When any type of media product, be it a TV show, film, or in this case, video game gets lost to obscurity, it’s the signal of one of two things: a hidden gem or a complete disaster. Unfortunately in the case of The Flash’s first solo video game, it falls quite firmly into the second category.

Each level of The Flash starts out the same way: Barry Allen (The Flash of this game) is informed by his colleague Tina at S.T.A.R Labs that the Trickster has planted a bomb at a specific address that he must race to before it goes off. This makes the goal of each level in The Flash exactly the same: Make it to the end of every level before the timer runs out to diffuse the time bomb, which is accomplished by punching it but hey, he’s The Flash, it may only appear to us non-speedsters that he’s punching it when in fact he’s performing a series of complicated bomb diffusing techniques.

Recycling is a word that is best used to describe this game, for beyond the repeated level objectives, everything from the stages to the enemies themselves are repeated over and over until the end of this short game. You’re either in a warehouse or an office building punching and kicking the same few enemy types until you get to the bomb to punch it into oblivion. The Trickster is the big bad of this game, but he never shows up as an interesting boss to fight, just as a repeated enemy type that you can almost blink and miss. The only other members of the characters famous Rogues gallery that make an appearance are Captain Cold, who shows up at the end of a level and similar to the Trickster, goes down incredibly easy, and the Mirror Master, who’s mentioned as one of the culprits also setting bombs but I don’t recall him actually making an appearance. 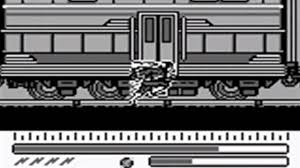 The best levels of the game, which subsequently also make best use of the license, are the ones where a bomb is at the front of a train and you have to race along side it until you reach the front at which point you hop on and take care of business as usual. Much like everything else here though, it’s cool when it shows up once, not so much after the second and third time.

A lot of the issues with the repetition could be reduced in The Flash if it was fun to play, but it fails in that regard as well. You have two attacks: A punch and a kick, mapped to “A” and “B.” Pressing both together simultaneously lets The Flash move at super speed at the expense of a draining meter. This allows you to defeat enemies easier, but you can takeout all of the enemies, including all members of The Flash’s rogues gallery, with your basic attacks so it’s best to save your full meter for when you have to outrun a train. You can refill your super meter between train chases by collecting money in the stages and buying items from vending machines. This was something in the game I thought was quite clever as the meter is indicative of the title characters rapidly reducing metabolism, however this mechanic was something I stumbled onto by accident after one of my many attempts to get through the game. That being said, I purchased this game used without a manual where this may have been explained.

With both face buttons on the handheld dedicated to attacks, that leaves jumping mapped to “Up” on the directional pad which is an absolute nightmare. Your heart rate will elevate as you roll the dice and find out if the character will actually leap over the chasm or simply walk into it and die. Enemies have the tendency to firmly plant themselves at the exact edge of where you need to land, and will kill you either by just standing there or by attacking once you land and pushing you back into your death.

Making traversal a problem ironically enough is the character’s speed. The Flash moves much faster than the screen scrolls, causing you to run into an enemy you couldn’t see, fall into a hole you didn’t know was there, or lose a large chunk of your health running into a cartoon-ish black circular bomb. Each of the levels are designed to have a top portion that runs parallel to the ground and often you’ll have to crisscross from the top to the bottom to make it to the end. You have no way to see if there’s a pitfall below you when you need to return to ground level, and this leads to a few cheap deaths.

The Flash is one of the many, many games I’ve reviewed where there’s a set number of lives and zero continues, but to its credit, there’s a work around for this. At the start of each level you’re given the address you need to go to and this serves as the password for that level, which you can input by hitting select at the games title screen. Returning after putting in a password starts you back to the last level you played with all of your lives intact so with enough patience, you can easily see this game through to the end, that is if you actually want to.

The Flash has all the makings of a great video game character, but this game is not a representation of that. While it has some interesting ideas that make good use of the license, like the train chases and needing to eat food to regain your strength, everything else is just plain awful. The stages and enemy types are low in number, members of The Flash’s rogues gallery are just as much of a threat as regular stage goons, and the control layout seems like it was selected by someone who never played this type of game before. Flash facts: Even die-hard fans of the scarlet speedster should skip this one.

One thought on “REVIEW: THE FLASH (GAME BOY)”