When it comes to the Teenage Mutant Ninja Turtles and video games, the two haven’t gotten along for quite some time. After being a part of some of the best licensed video games ever produced in Konami’s TMNT: The Arcade Game and Turtles in Time, there really hasn’t been a truly excellent game starring the anthropomorphic amphibians since the early 90’s, despite the likes of Konami and Ubisoft developing game with the license throughout the 2000’s. The current holder of the now once again hot property, thanks in no part to the pretty excellent animated series running on Nickelodeon, is Activision, who like other companies have done the license little justice.

I haven’t had a chance to play the game that tied into this summer’s forgettable film series reboot, though  unconfirmed reports say it may be actually good, I did play 2013’s Out of the Shadows which I will go on record as saying is one of the worst games I’ve ever played period and the first game based on the new animated series, simply titled “Teenage Mutant Ninja Turtles”, is a really boring beat-em-up best suited for the younger crowd only, and I mean really young. A glimmer of hope came to Turtles fans late in the year when it was announced that WayForward, those who worked on DuckTales: Remastered as well as Batman: The Brave and Bold among many others, were not only making a TMNT game subtitled “Danger of the Ooze”, but one in the style of Metroid, a genre in which they found success in with 2011’s Alien: Infestation. Is Danger of the Ooze the game TMNT fans have been awaiting for all these years? I would say so, though the package does have a few warts.

Danger of the Ooze is nestled between the second and third seasons of the show currently airing on Nickelodeon and charges the Turtles with stopping an alliance between the evil Shredder and the alien Krang race from Dimension X from building a new weapon using a new form of “Super Mutagen”. The story is not the main draw here, it never really has been in a TMNT game, but it serves its purpose in that it facilitates WayForward moving the team through a decent number of environments, from the Turtles lair through to the alien world of Dimension X, and including a lot of the cast from the series, all of which are voiced by their regulars with the exception of Leonardo who was replaced late in season two. 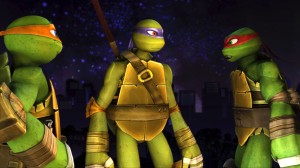 Don’t expect to see the Turtles together like this very often.

The inclusion of the cast really makes this feel like a genuine product for fans of the show, complete with the series new opening and gives the game a “lost episode” feel, but one of the best parts of the show and the property as a whole, is the banter between the group which is sorely lacking here. The only time you’ll ever here them play off one another is in book ended cut-scenes despite the fact that the player has access to the full roster at most times. This would be more noticeable should the game itself by a drag to play, but thankfully it isn’t.

This game takes its inspiration from games like Metroid series and the Castlevania handheld games wherein the player is given a large map to explore with areas blocked off until you either get a new ability or tool and it’s a very good entry in the genre. You get a lot of interesting tools to play with including shurikens in standard, electric and explosive varieties, as well as smoke bombs that let you BAMF through laser grids combined with a lot of other genre staples like a double jump, an air dash and a climbing tool, all of which help you progress deeper and deeper into every nook and cranny of the map. The moment-to-moment exploration is incredibly fun and towards the games conclusion when you’re dashing over spikes, double jumping off of walls and hurling projectiles to open previously locked doors you really get the feeling that your arsenal has developed organically from what you started out with, the same way as the best games in the genre have to offer. It helps as well that WayForward provides an objective but never funnels you right to it, providing a fair amount of freedom and off-the-beaten-path exploration.

Like the best games starring the Turtles you can pick whoever you want to be,  simply by tapping their corresponding icon on the bottom touch screen, something I’m of two minds about. It’s great that WayForward didn’t go the route of starting off as one character and then finding the other four, something they could have done given the game they made, but it also means that none of them feel special. It would have been nice for example if you needed Raphael to get around a particular obstacle, or Donatello’s to get through a Krang security device or something. The four play exactly the same as one another with the same set of upgradable combos activated by getting into a simple four hit combo and then hitting the d-pad or analog slider in one of four directions, referred to as “Shellkickers”.

While the Turtles do play the same, not all of them are created equal. Leonardo and Raphael can take out even the toughest Foot and Krang soldiers with a few hits but Mikey and Don’s weapons take a few more melee hits than their brothers. Maybe this is WayForward’s way of balancing the scales, as traditional the latter duo have been of the strongest Nina Turtles, going back as far to their first appearance on the NES.

Speaking of the NES, WayForward’s tribute to the Turtle’s legacy is also the game’s ultimate downfall. It’s clear that the people who made this game wanted to throw in a few Easter eggs for fans of the TMNT in previous video games as early as the title screen, which is a recreation of the cover of the NES game, as well as one of the bomb’s you had to defuse during the infamous dam stage. Unfortunately Danger of the Ooze also features the same life and death mechanic from that game, and it only exists to artificially extend the life of the game and show the player how annoying it is to navigate the map.

As mentioned previously you can play as all four Turtles whenever you wish, but when each one loses all their life, they have to be rescued from rooms designated on the map by the letter “R”, similar to the first TMNT game on the NES. There’s plenty of these rooms found on the map, and had WayForward allowed you to visit any of these to recover your fallen brothers it would be fine, but they’re transported to random points on the map. The first and only time this happened to me (I took extra precaution to make this never happen again, reloading saves when necessary) I lost two of my teammates during the boss fight with Tiger Claw and upon exiting the combat arena I saw that one character I had to recover was on the complete opposite side of the map. Luckily, I thought, that after that particular boss I obtained an upgrade that allowed me to fast-travel, or so I was led to believe. 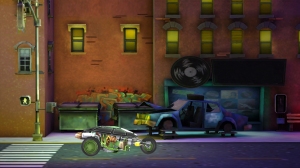 One of the fast-travel vehicles that unfortunately doesn’t get you very far.

Yes, you can find points on the map that allow you to get around quickly, however they only move you slightly between two arbitrary points on the map, nowhere near as helpful as the warps in something like Symphony of the Night. Would it have been so hard for the Turtles to recover some type of short-range teleportation device from the Krang that allowed them to warp around? Something like that, at least for me, would’ve turned this game from a pretty good to great. Not only is it cumbersome to reclaim your fallen brothers in arms, but it makes going back for additional upgrades, normally a thing I’m a complete sucker for, a chore. The game is designed in such a way that you do return to an early area organically with your final arsenal, but I had no desire to go all the way back to the right side of the map to open the red exploding shuriken door. A shame really, because DOTO up to that point had me drawn in pretty deep.

TMNT fans need not fear the curse that has befallen the license since the heydays of the SNES as DOTO is easily the best Turtles game I’ve played in a long time. The controls are tight and both your arsenal of moves as well as weapons are doled out in such a way as to not overwhelm the player; exactly like the best games of this type do. Had WayForward nixed the mechanics borrowed from the much maligned original TMNT NES game, I would recommend this game much higher, however even in its final form, it’s well worth picking up if you’re a TMNT fan or simply a sucker for Metroid style games. Just do yourself a favor and don’t lose any members of your party, okay?