PUBLISHER OF THE YEAR

I don’t know what secrets are withheld in the WB Games office on how to make the best licensed games on the market, but if I had one wish, I would wish for my student loans to go away, but if I had TWO wishes, I wish WB Games would share with every single publisher the secret of making amazing licensed games. Not only did they give us a great game based on the Lego Movie and the third chapter in the Lego Batman series, but also two beloved Middle-Earth outings in Lego The Hobbit and the Game of the Year nominated Middle-Earth: Shadow of Mordor.

On top of their achievements in the work they published, respect must be given to them for delaying Batman: Arkham Knight into 2015 to allow Rocksteady to make the single best game possible; a decision certain other unnamed publishers would not have went along with. Things are looking bright in 2015 for WB Games already as we know that Mortal Kombat X and of course Batman: Arkham Knight is on the way. I can’t wait to see what else they have in store for us, in particular what the fine folks at TT Games are up to. Lego Jurassic Park? Lego Marvel Super Heroes 2? Something else entirely? Whatever it is, I’m sure I’ll be getting 100% in it either case.

DEVELOPER OF THE YEAR

TT Games make some of the most silly, yet incredibly fun games to play yet no one can take away just how hard-working the studio is, especially if you look at their body of work circa 2014. They started out the year with a bang when they released The Lego Movie Videogame, a game that proves that not all movie games needn’t be awful. This was followed mere months later by Lego The Hobbit which recaptured the first two parts of The Hobbit trilogy in true Lego form.

The biggest release of the year for them came in the form of Lego Batman 3: Beyond Gotham, a massive game starring over 150 DC characters that spanned multiple planets and included celebrities like Conan O’Brien, Kevin Smith and the original TV Batman himself, Adam West. It’s hard to think of any one developer, who works on licensed games or otherwise, that produced the sheer amount of volume with consistent quality as the underrated TT Games and I’m very much looking forward to see what worlds they’re going to be bringing their special brand of magic to in 2015.

FREE-TO-PLAY GAME OF THE YEAR

Call it an issue of being a product of my time, but I don’t think I’ll ever be in a space where I can truly accept free-to-play video games. I’m very much of a mindset that I want to pay for everything up front and not be forced to pay-to-play/win. That being said, if there simply has to be free-to-play games, I can only hope that they’re as good as Spider-Man Unlimited from Gameloft.

Gameloft has been responsible for some pretty terrible Marvel games in the free-to-play market, including titles based on Thor: The Dark World and Captain America: The Winter Soldier, but Spider-Man Unlimited is just a joy to play, as its simple and fits the mobile space very well. It plays like any other endless runner where simple swipes on your mobile device cause Spider-Man to move out-of-the-way of obstacles yet it still manages to cleverly use the license when the title character transitions to wall-crawling, web-slinging and of course fighting the roster of the Sinister Six.

It helps that Unlimited is a beautiful game, using cel-shading techniques that are a call back to the similarly gorgeous Ultimate Spider-Man on the GC/PS2/Xbox. Fans who are keeping up with the current Amazing Spider-Man series by writer Dan Slott also get a treat with some up to date Spider-Verse content like Spider-Gwen and the first look at the new Spider-Woman outfit.

Spider-Man Unlimited features a lot of the annoying quirks found in nearly every game of its type, but don’t let that stop you from enjoying at least a few rounds of this very well put together game. If anything it’s much better than the game Activision asked us to pay upwards of $80 back in April.

2014 marked the 75th anniversary of Batman’s creation and one of the ways this was celebrated was with the first ever DVD/Blu-Ray release of the 1960’s Batman series. Fans who grew up with that series also got a second treat when it was announced that not only would that version of Batman be featured in Lego Batman 3: Beyond Gotham, but he would be voiced by none other than Adam West, who pulled double duty in the game playing himself as well, replacing Stan Lee as the character in peril.

There’s a lot to like about Lego Batman 3: Beyond Gotham, but the part of the game that will easily bring the biggest smile to your face is hearing what Adam West will say, whether when he needs to get saved from a shark with the help of oceanic bay-repellant or when he’s in his full costumed glory as the Caped Crusader. Should TT Games choose to do a full Lego Batman ’66 game, I will be first in line to pre-order it. 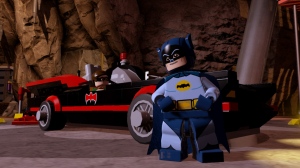 Lego Batman 3: Beyond Gotham is a massive game, taking over 35 + hours to squeeze every piece of content out of the it. Of everything that’s included in the latest entry in the Lego series, nothing quite matches the pure bliss of playing the bonus Batman ’66 level. Assembling the classic Batmobile and then driving it using some shoddy special effects, the jazzy music and of course the narration by Adam West himself brings to life one of gaming’s truly greatest moments. Even if you’re not a fan of the Lego games, and really, why wouldn’t you be? You simply must find a way to experience this stage for yourself.