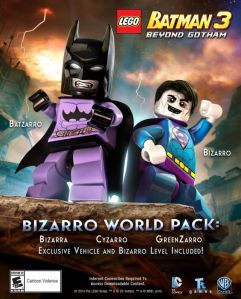 Of the three post launch expansions for Lego Batman 3: Beyond Gotham, Bizarro World was perhaps the one I was looking forward to the least. Not that I don’t like Bizarro or anything, in fact I think the character is a perfect fit for some of the silly humour found in the Lego games, I just was more excited for last month’s Arrow and the upcoming The Squad. Does that mean that I didn’t like this short Bizarro adventure? Not at all, I actually liked it, but this more so than any other of the past four add-ons feels like it should have been part of the larger Beyond Gotham game.

After being given his own world to inhabit and protect from his worst enemy Superman, Bizarro’s newly christened “planet” Rocktropolis comes under attack from the planet Apokolips who plan to syphon energy from the planet and leave it even more barren than it already is. With the help of a device borrowed from Lex Luthor, Bizarro brings into existence his own version of the Justice League to help save the day. 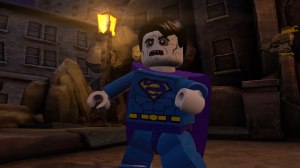 Easily my favourite part and what really makes Bizarro World stand out among the other packs that have come and will come after it is the excellent use of the backwards “Bizarro” concept: Greenzarro, the backwards Green Lantern, is a scaredy cat whose construct for digging is a teddy bear as opposed to a jack hammer that the other lantern characters use and characters like Superman and Cyborg who had heat vision have it replaced with freeze vision and heat breath. The narration throughout by Bizarro is really funny, something that has been par for the course with all of the Season Pass expansions and Batman ’66 bonus stage. Where I would have liked to see reverse world concept played up more is in the gameplay itself. The Lego games are all about smashing the environment then building things to progress and having that simple concept turned on its head where you have to smash perfectly constructed items into junk could have provided an excellent source of comedy and another way for Bizarro World to stand out, as otherwise it’s just another short level that you can beat twice in under a half an hour.

Completing Bizarro World not only provides access to the “Bizarro League” in freeplay mode, but two other big (one literally) characters as well: Darkseid and Desaad. It’s a shame really that a character like Darkseid, someone who you can easily position as one of the DC Universe’s most dangerous threats is used a plot device and beaten off-screen by the actual Justice League, not even given a chance to be at the very least a boss fight. It’s nice that Darkseid has finally joined the extensive Lego Batman 3 roster, but this is a character you use as a final boss, not a purchased after the fact, freeplay only character. The same can be said for the whole Bizarro World expansion. As Beyond Gotham was already cosmic in scope, a trip to the Bizarro universe could’ve easily added some much-needed variety and humour apart from the generic lantern worlds. Maybe next go around with the DC Universe?

Minor grievances aside, Bizarro World is a great time while it lasts and whether or not you purchased the Season Pass for this game already, it’s not setting you back much coin. Should TT and WB Games return to the universe after their once again busy year in 2015, I hope that a lot of characters and concepts get revisited here in a future Lego DC game.