With the popularity of the Teenage Mutant Ninja Turtles in the late 80’s, it looked like everyone was trying to create the next big anthropomorphic property: There was the Battletoads video game franchise, Biker Mice from Mars, and Street Sharks among a few others. One of the earliest attempts that spawned a short-lived animated series and a one wave action figure line was Bucky O’Hare, based also on comic book that also got its start in the 80’s about a green-furred rabbit and his crew who sought to save their universe from an armada of evil toads. As it was for any cartoon that got a modicum of popularity, Bucky O’Hare also happened to get a video game based on the property from Konami, at a time when they could really do no wrong, especially when it came to their licensed games (check out my reviews of Batman Returns on both the NES and SNES, as well as The Adventures of Batman and Robin as a testament to that). Whether you had all the toys (like I did), watched all the episodes over and over (guilty) or still sing the theme song (not doing it right now, I swear), Bucky O’Hare is must have for NES fans, especially those who love Capcom’s blue bomber.

In Bucky O’Hare, the title characters crew: Deadeye Duck, a four-armed, eye patch wearing fowl; Blinky, a one-eyed jet-pack wearing android; Jenny, a psychic cat and Willy DuWitt, a human who can travel to Bucky’s universe are kidnapped by the Toad armada. It’s up to you as Bucky to venture through multiple planets across the Aniverse in search of his lost crew, and put an end to the Toad menace once and for all.

The first of many MegaMan homages.

The set up for the game provides the first of many comparisons that you can draw to the MegaMan series of games. You’re given a stage select screen where you can choose which order you want to tackle the game’s levels in. The opening stages are colour themed planets: Blue, Green, Red and Yellow that carry the themes one would expect from an NES game: The Red Planet, for example, is the fire world; Blue is the Ice Planet; Green is a forest and the only with the only one breaking away from the mould is the Yellow planet, which isn’t a desert like you expect, but an outer space mining area. Despite being ripped straight from the “how to design a video game” handbook, the levels are a joy to play through as well as look it, bursting with colours and details that express the themes they use.

The goal of the game initially is to rescue your teammates and when you manage to liberate them from a planet, you can cycle through them by hitting the select button, and they act just like collecting a weapon from a robot master in MegaMan. Each character has an alternate ability that can be activated by charging the B button: Bucky, being a rabbit and all has a super jump; Blinky can break blocks with his attack as well as fly briefly with his jet-pack; Willy has an incredibly powerful laser; Deadeye can stick to walls for a limited time and Jenny has a psychic attack that you can guide across the screen.

What makes Bucky O”Hare so much fun, in much the same way the best MegaMan games are, is that the game encourages you keep alternating between characters to not only defeat bosses, but complete levels as well. When tackling the Blue Planet, it’s best to do so after you’ve recovered Blinky because his jet-pack makes getting around much easier, and his bullets can clear pesky ice blocks out-of-the-way. The levels that will test you the most are the final ones in a Toad mothership, this games equivalent of a Dr. Wily palace, where, no joke, you not only have to fight against your own team in an endurance level, but learn the pattern of disappearing blocks. Here you’ll have to switch to Deadeye to scale a wall with spikes coming after you only to on the next screen use Jenny’s ability to clear away hard to reach enemies that stick to your head and limit your jumping ability. 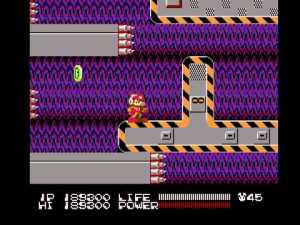 Make no mistake, just because this game is based on a property they were trying to sell to kids doesn’t mean it isn’t brutally challenging, especially in the later stages. This statement is not true for the levels, where finding out which character to use and when is paramount, but to the massive bosses as well, made up of Toad weapons of destruction and villains from the show like Toadboard and Al Negator, and yes, someone got paid to make that last name up. Like the best Konami games though, the game is never unfairly difficult and with enough practise you can overcome even the most frustrating challenge. It helps that each level you beat gives you a simple five-letter password, and when you lose all your lives and continue, you start from the same “act” of a level with little to no penalty other than a reduced life meter that you can recover with a power-up. Helping to keep your blood pressure down once again is another amazing NES Konami soundtrack with plenty of memorable tunes, my favourite of the bunch being the Red and Yellow Planet themes. Of course, none are as memorable as the show’s theme song:

C’mon, you didn’t think I’d write something about Bucky O’Hare and NOT put in the theme song, did you?

Bucky O’Hare is a game that doesn’t hide how much it wants to be a MegaMan game, but this game uses all the tropes of that series and at times is better than some of the later entries in that series. Like a lot of Konami games of the era, Bucky O’Hare is the complete package: Great controls; catchy music; a fair but meaningful challenge and beautiful graphics. If you’ve been avoiding this game because of the license or think that because it’s based on a cartoon it’s for kids, get out of that mind-set. If you don’t have this game in your collection, it needs to get into to as soon as possible.