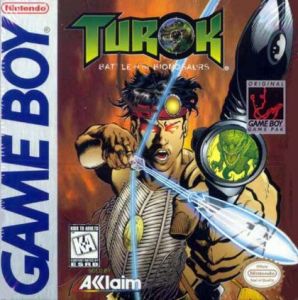 What do you do with any video game you intend to spawn into a series after a breakout hit? Why you spin it off into a handheld title of course. In the 90’s this meant making a Game Boy game, which is exactly what Acclaim did when they released Turok: battle of the Bionosaurs in late 1997. As I discovered in my review of Armorines: Project S.W.A.R.M for the next iteration of the Game Boy, the Game Boy Color, it’s not that easy to take a concept that really only works in 3-D and then try to cram into a 2-D format on significantly underpowered hardware. After playing this game though, it makes me think less of Armorines on the GBC, as developer Bit Managers somehow managed to capture the essence of Turok: Dinosaur Hunter, problems and all, on the original black-and-white Game Boy.

It’s funny looking at the Turok Game Boy games now because BOTB (Battle of the Bionosaurs) is the only game Acclaim tried to pass off as a new game, yet it has the exact same plot and structure as Turok: Dinosaur Hunter on the N64: Explore levels, collect keys to open new levels, gather pieces of the Chronoscepter and defeat the Campaigner. From Turok 2: Seeds of Evil all the way up through Evolution on the Game Boy Advance, all of these games are sold with the same title as well as cover art yet are completely different games plot wise than what is found in their console counterparts.

Obviously Bit Managers couldn’t make a 3-D game or first-person shooter on the Game Boy, so instead they opted to make a 2-D side-scrolling action game, which much to my surprise still feels like a Turok game. As mentioned above you still have to collect keys to unlock new levels, and the levels are decently big with caves to explore, secrets to be uncovered and encourage player exploration, just like the N64 game. There’s never a clear path from the start of a level to the finish, and it’s up to the player to discover the best way through each level. There’s no memory card to save your progress on the Game Boy, however each level gives you an easy to write down password that saves your progress, number of lives, and Chronosceptor pieces.

Much like the N64 game however, problems arise with a lot of the levels in BOTB due to some frustrating platforming deaths. The game has excellent movement, jumping and shooting controls and you can scan your environment horizontally by holding select and looking up and down. Yet, as the game goes on, there’s too many jumps where the difference between landing in successfully and losing a life and progress comes down to the pixel. Don’t get me wrong, I’m a sucker for platformers, but there were far too many times when I had to restart my game because I lost far too many lives trying to land one jump. It doesn’t help that unlike the N64 game, you die if you fall from a certain height, which also leads to you spouting off some colourful language.

One element that doesn’t hinder the platforming one bit is the game’s graphics, which are really good for a late in its life cycle Game Boy game. What you can and cannot jump are grabbed onto are clearly defined and it’s also easy to understand what you can interact with, normally simple switches that turn on platforms or open doors. The stages follow the same order as the N64 game and include details from the game, notably the Treetop Village that starts out as a jungle and cave before turning into a, you guessed it, treetop village. The impressive graphics aren’t just limited to the environments, but the characters as well. Turok has a pretty basic looking character model, but moves with a lot of fluidity, especially when hoisting himself up after a particularly perilous jump. The enemies are all copy/pasted as well from the N64 game are easily identifiable.

What defines the Turok series is the extensive arsenal and BOTB does not disappoint. Starting out you’ll be limited to a knife and a bow and arrow, but through the course of the eight stages you’ll collect every weapon that appears in the N64 game, though unfortunately they don’t pack the same screen clearing impressive punch. Given the Game Boy’s limited button placement you’d figure that cycling through a roster that big would be a pain, but it’s handled pretty well. All you have to do is hold select and quickly hit left and right on the direction pad. Rarely if ever did I also come across a situation where I was left vulnerable because I needed to quickly get to the right weapon. The levels are designed such that you can prepare yourself with the right enemy before an enemy catches you off guard. 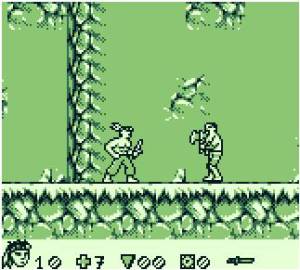 The bosses that appear in the console game also make an appearance in this game in exactly the same spots, but they don’t provide the same level of challenge. In Turok: Dinosaur Hunter I got into some white-knuckle battles with the giant Mantis and the T-Rex, but in BOTB, you can sometimes just stand in one spot and let loose with your mini-gun until they die. If you can manage to find all the pieces of the Chronosceptor, the final boss can be taken out with little to no difficulty in two hits you don’t even have to aim particularly well.

It’s not easy to translate a 3-D game into a 2-D game, but somehow Bit Managers made it look easy in Turok: Battle of the Bionosaurs on the Game Boy. The problems with some unfair platforming that appeared in Turok: Dinosaur Hunter unfortunately rear their head, but everything else from the collectible hunting, open levels and extensive arsenal make this feel like a Turok game captured in 2-D. If like me you really enjoyed the original N64 Turok game and still have the hardware kicking around to play this game, I would give it a look.

3 thoughts on “REVIEW: TUROK: BATTLE OF THE BIONOSAURS (GAME BOY)”