Growing up as a video game fan in the 90’s couldn’t have easy for a female. Sure, there was Joanna Dark to look up to and even Lara Croft was a no-nonsense, intelligent role model who was just as comfortable in a museum as in a shooting gallery, but all those qualities that made the character endearing were always overshadowed by three things: two breasts and a butt. Tomb Raider publisher Eidos wasn’t even trying to be subtle when they introduced their second female lead franchise, Fear Effect, that had ads like this: 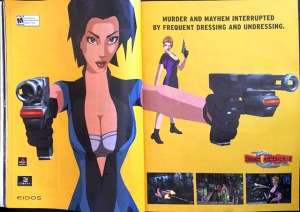 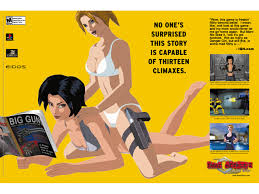 Danger Girl, a late 90’s comic series from J. Scott Campbell and Andy Hartnell about a Charlie’s Angels group of female super spy’s led by a Sean Connery wannabe overseer, is very much a product of that era. Without reading an issue of the comic and going by the descriptions of the characters from the booklet of the game by developer N-Space and publisher THQ, you gather that these aren’t just a group of airheads in tight shirts and leather outfits, yet they still manage to squeeze in pictures that remind you that yes, their greatest “assets” are indeed their size and measurements: 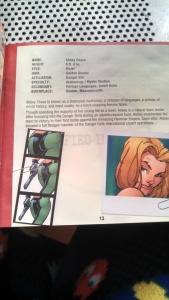 In Danger Girl you take on the role of three different agents from the espionage group of the same name: Abbey Chase, an experienced agent here who was a rookie to the group in the story this was based on; Sydney Savage, a leather clad character who you could easily mistake for Black Widow and JC, a character created specifically for the purposes of this game. Together they most stop the Neo-Nazi group Hammer from harnessing the power of a weapon long since forgotten to rule the world.

Other than the character models of the three playable characters, this game very much feels like it wanted to be spoken about in the same sentences as Tomb Raider, at a time when that franchise was already dated compared to what else was on the market and was suffering greatly from franchise fatigue. You’re taken on a globe-trotting adventure that takes you to location like a jungle, an Egyptian Temple and a museum in London among a few others, much like Core Design’s famous archaeologist. More so than the locations you visit, the controls feel almost identical to the Eidos’ classic adventure series on the PSOne. This game came out in a post DualShock world, yet is still best controlled with the directional-pad and the buttons for jumping and mapped in a similar matter. Even when jumping and reaching for ledges, whether from a standing still point or from a running start, you could mistake anyone of the three characters for Lara. 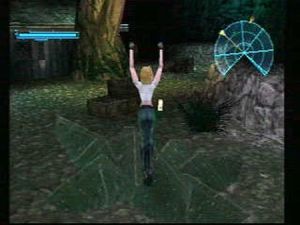 What separates Danger Girl from the game it’s trying to emulate most is the emphasis on shooting over platforming. You won’t find many, or really any, circumstances where a tricky jump will spell doom, but you’ll get into a lot of heated fire fights. For those who grew up with shooters on platforms like the original Xbox will have a tough time accumulating themselves to the controls in this game. Despite having a second unused control stick for aiming purposes, you mostly just strafe around enemies with the L2/R2 buttons relying on the games lock-on feature to steer you in the right direction. It works quite well, better than what I could’ve ever hoped, but you still get the feeling like you’re a kid playing guns with your friends arguing that no, you were the one who shot first. You can put yourself in free-aim mode by hitting the triangle button, but you’re required to be completely stationary for this mode, which will lead to lost health unless an enemy is completely oblivious to your presence. This only becomes a real frustration in stages where this is absolutely necessary to completing your goal.

Outside of engaging in shoot-outs, you’ll be tasked with completing objectives within stages that thankfully are never that puzzling to figure out, so don’t expect any scenarios like in Goldeneye 007 where you make it to the end of the level only to find out you missed something along the way. If you have to disable the power, or hack a camera feed, chances are you’ll stumble across it on your way to the exit, and when you unlock a door, the game will start a cut-scene telling you what opened are where you need to go. Something I liked about Danger Girl is that each of the levels tries to introduce something new to keep things interesting, whether that’s the use of gadgets like night-vision goggles to spot laser traps, having to turn on heaters to keep your character warm until you can get proper outdoor clothing (I’m assuming because N-Space wanted to show off their nipple tech) or being tasked disabling cameras with the use of the remote.

Of the games twelve levels, three of which are uninspired and easy boss fights, one in which you can stand in one place and not take any damage, the only real stage I found overly frustrating is the third stage where you have to rescue hostages and defuse bombs. This stage requires far too much precision aiming to keep hostages alive and bombs timers will start ticking before you even have a chance to see them. Also in order to diffuse the bombs you have to do a Simon repeat the sequences mini-game, which may be insulting to some, but I’m just absolutely awful at. Seriously if you ever want to put me in a life or death trap, put me in a situation where I have to repeat back and ever complex sequence without the help of a note pad. As this game lacks any mid-level checkpoints, failure in either saving hostages or too many set off bombs means a reload to the start of a level  My only saving grace in level three is that you can complete it with losing two hostages and two bombs. 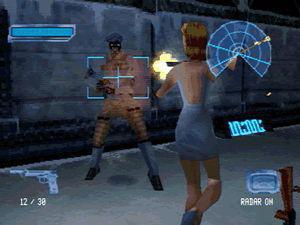 Where the game perhaps could have used more diversity was in how the three different characters play. The levels that have Sydney as a playable character make you feel like you’re supposed to play things stealthy, but running in guns a blazing is still just as an effective option. This character also comes equipped with a sniper-rifle in every level for increased range, yet outside of a boss fight, the same one where you can stand in place and take no damage, it’s not that effective of a weapon. Another character, the newly introduced JC, comes across as the mechanically talented member of the group, but never does anything more complicated than what you do in the levels that feature Abbey, the character you use the most.

Presentation wise, Danger Girl is not that bad-looking for a game of its era. The characters are of some of the most detailed and less blocky than I’ve seen in even some of the best looking games on the system. The level design and environment layout, with the exception of one instance late in the game where it was impossible to see a switch to open a door, is also done in such a way that you’re never wondering what can be interacted with and mostly you’re never at a loss of where to go. The FMV cut-scenes, something that sold many people on CD based games and the PlayStation once upon a time, are not up to the caliber of games like Tomb Raider or any of the Square games. This is also one of the first cut-scenes that you get the privilege of watching, and after the bar is set there, you’re not really in the mood for any more: 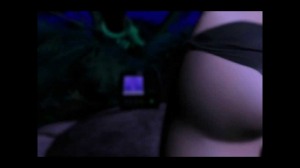 That all being said, there’s far less pandering going on from this moment out, except for a QTE in the museum level featuring Sydney going gymnastics through some laser traps that’s straight out of Entrapment. The most acting for the most part is okay, nothing memorable or distracting, though the voice actress for Sydney is not very good at pulling off a posh British accent.

My expectations for a licensed game based on a comic book property that’s very much of its time were pretty low going in, but I actually enjoyed my time with Danger Girl. Much like the comic it’s based on, the game is very much of its time and might not appeal to those with more modern sensibilities, but everything works fine and there’s nothing game breaking or all that frustrating other than the third stage which can be overcome with a little practise. If you grew up with games like Tomb Raider or Syphon Filter and have played those games to death and are looking for something in that vein, might want to give Danger Girl a look.