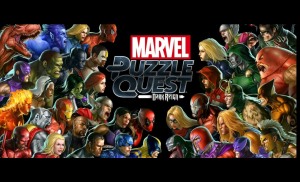 I always wanted to get into Puzzle Quest. Back in 2007 when it was released on the DS and PSP, the game blew up from its humble origins thanks to critical praise and hype on all the gaming podcasts I listened to at the time. Try as I might though, it didn’t quite “click” with me, perhaps a reason being I couldn’t really get behind the fantasy setting because I’m not really that much of a fan of that aesthetic. In 2013 I got excited when D3 announced that they would combine the Puzzle Quest concept with the Marvel Universe for free on mobile devices, so the day it went up for download I immediately got it on my device…and then quickly lost interest due to the free-to-play trappings that turn me away from most mobile games, even the Marvel ones, regardless of how good the core game is. It looked like Puzzle Quest and I were destined to never cross paths, that is until it was announced that a paid version of Marvel Puzzle Quest: Dark Reign would be coming to consoles. In the weeks that this game has been out, I’ve put more hours into it than I care to admit, and if you let it, it will probably do the same to you. Marvel Puzzle Quest on the PS4 is an incredibly addicting game that at a low price of $14.99 is almost too low for how many hours of game you get. 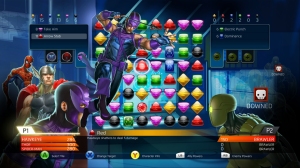 For those unfamiliar with the Puzzle Quest core concept, it’s a match-3 puzzle game like Bejeweled where the primary goal is to match three alike colours to eliminate them from your playing field. That’s just the base game however, as things get a little more complicated. Puzzle Quest combines that simple concept with an RPG leveling and combat system. In Marvel Puzzle Quest, you play matches that are 3-on-3 where the goal is to be the team left standing. To attack you can either simply match three colours to hit your opponent with greater damage being dealt through carefully planned combos, or you can use one of your characters abilities.

Abilities can be used by building up enough of a particular colour through matches to activate an ability. Gathering up fourteen or more green coloured gems, for example, allows you to use Thor’s power that attacks all three members of the opposing team. In seeking out those green gems, however, you run the risk of your enemy building up their attack power as well, so do you concentrate your efforts on being offensive, or defensive? It sounds pretty overwhelming, but it really isn’t. The game eases people into it pretty easily if you haven’t played before or in a very long time, like me, and after a few matches, you’re caught up to speed and contemplating what your ideal team will look like.

In vanilla Puzzle Quest matches were one-on-one affairs, but with a little Marvel flavour thrown in, the ante is upped to 3-on-3 which changes the dynamic of the game greatly. You can focus your attack on whoever you wish with the simple bush of a button, and it’s up to you if you want to take out the weaker enemies first and leave the big fish for last, or go for the main course and save the appetizers for dessert. This not only factors into how you attack, but how you build your team as well. Admitting up front, I’m very bad at puzzle games, whether it’s this type or a faster game like Puzzle League, and at first I was losing. A lot. That was until I got smarter with my team. I built a team that used up a lot of colours on the field and had complementary abilities. I had Thor to be my heavy hitter with his powerful attacks and high HP; Spider-Man as my go to healer and Black Widow to  stun enemies and steal gems away to not only cripple my opponents, but to give me an upper hand. This is just one example of a team combination that worked for me, and ultimately you can go with whoever works for you.

Starting out your pool of characters you can select from is pretty paltry, but through the course of the base game all the question marks on the character select screen will be filled out, with the exception of some characters on the bottom row who are exclusive to the two available DLC packs. Most of your favourite heroes and villains from the Marvel Universe will make an appearance as a playable character, including variations of Captain America, Hawkeye, Spider-Man, Captain Marvel, Venom, and Magneto among many others.

In sticking with a base team across the entire game, things can get a little easy and routine. A mechanic introduced early on is a consumable team-up card item that I found important to success early on, but very quickly I chose to ignore it because I simply didn’t need it as my roster steadily built up to the level 300 cap. The game kept giving me messages telling me that I was missing out on getting a new team-up power-up because my inventory was full, however I never felt like I needed them to get through the game and thus didn’t think I was really losing anything important. Sticking with one team however, no matter how much you have a sound strategy, is unwise because the game will put you in scenarios where a member of your team is now an opponent and therefore unselectable for that round, causing you to scramble to put a bench warmer in their place, so having a back-up on hand is never a bad thing. Throughout the campaign you’ll also be thrown into team-up situations where you’re forced to have a certain hero or villain as your third. Normally I’m opposed to things like this in RPG as I hate having one of my party members forcefully removed, but the team-ups provide an opportunity to try a character you may have ignored who may wind up being that all to important fourth member when you’re up against one of your main three characters. 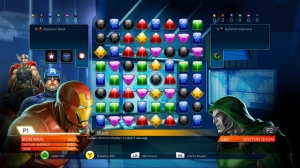 Marvel Puzzle Quest is sub-titled Dark Reign because its campaign takes inspiration from the comic story of the same name where the Green Goblin himself, Norman Osborn, overthrew S.H.I.E.L.D with his own organization called H.A.M.M.E.R and started up his own team of Dark Avengers, who were more or less established villains masquerading as a comparable hero. Bullseye for example, became Dark Hawkeye, and Wolverine’s son, Daken, became Dark Wolverine. The catalyst in the comic’s story came at the end of the Secret Invasion cross-over story where it was Osborn who through a chain of events ended up saving the day in front of the entire world. The game doesn’t mention Secret Invasion, using instead the ISO-8 meteor fall as the start of the story.

If you’re not familiar with ISO-8, then you haven’t played any of Marvel’s free-to-play offerings that started in 2012 with the then Facebook only Marvel Avengers Alliance that established it as the McGuffin that would not only connect all the free-to-play games, but would also extend your play time and grow your characters through microtransaction purchases. It’s perhaps this part of the game that doesn’t translate to the console version as well as the rest of the game. It doesn’t particularly stick out or become distracting, it just doesn’t have any meaning when it’s not featured as a mechanic in this version of the game. It mentions how the element fell one year ago, which was true when Marvel Puzzle Quest: Dark Reign came out on mobile devices initially in 2013, a year after Marvel Avengers Alliance, but it means nothing here because you can play for as little or long as you want. The ISO-8 aside, the story is interesting enough for you to not skip over the dialogue between matches, but not exactly compelling enough to drive you to play “just one more match”; That’s left to the core game itself.

The console edition of Marvel Puzzle Quest: Dark Reign seemingly came out of nowhere and has proven to be one of the biggest surprises of this fall. Those who have already sunken hours into the mobile game may not find anything new whatsoever here, but for those like myself who held out for a time when they could pay for this game upfront, it was well worth the wait. Behind the simple match-3 puzzle gameplay there’s deep team-building and RPG mechanics that will keep you coming back for more, or just playing one more round to see what opponent you’ll come up against, what character you’ll earn and how they could possibly fit into your team. At a cost of just $14.99, Marvel Puzzle Quest: Dark Reign will occupy just as much as your time as game’s that cost three or four times its asking price.