This week’s news about the termination of Disney Infinity and the closure of internal Disney Interactive studio Avalanche Software resulting in the loss of three hundred jobs was nothing but tragic. As someone who may have loved the actual toys of Infinity over the game itself, it’s still sad to hear that hundreds of people who were very passionate about the Disney Infinity brand and loved their jobs now have to seek employment elsewhere in an already competitive job market. While I was very thrown when I saw the news about the platform coming to an end next month when I saw it come up in my Twitter feed, once it sank in a little it actually didn’t come as that much of a shock, and today I’m wildly dreaming about how Disney’s new approach to licensing can be salvaged into another franchise.

I can’t speak about anyone else’s feelings, both positive and negative, with Disney Infinity, but to me the biggest problem with the game is that it was a bunch of great franchises and characters in search of a world. The biggest draw of the Disney Infinity franchise was the ability to create anything in the toy box, something that developer Avalanche but a lot of effort and tools in refining in the three iterations, but to me at least, that simply wasn’t enough. What’s the point of making figures based on Aladdin, Mulan and Tron if there isn’t a themed world for them to play around in a la something like Kingdom Hearts? I know there’s probably a very large and powerful vocal fan base who ignored the play sets, Infinity’s take on traditional campaigns, and spent most of their time either building or playing other people’s creations, but I never have once found this aspect of any game appealing and I don’t think I’m the only one who felt this way.

I can only imagine the work that went into creating the toy box development tools to be as easy to use as possible, but it also felt like Disney was saying “well, just do focus on this toy box thing, make some basic campaigns to satisfy kids and call it a day”. Now I’m sure there’s a lot of great creations to be found within Disney Infinity’s toy box created by a very dedicated fan base, but I don’t think it created quite the mainstream fever that it needed to in order to sustain itself. When I think about a game like the original LittleBigPlanet that hinged a lot of play time on user-generated content, there were always stories on gaming websites about the crazy creations people came up with like a stage based on Konami’s Silent Hill, or even a working calculator. More recently you can look towards a game like Super Mario Maker for Wii U that has blown up on websites as well as the YouTube and Twitch communities well past its launch in the fall of last year. It’s not a fair comparison as both Mario Maker and LBP were both 2-D games as opposed to Infinity which was completely 3-D, but despite the development of the creation tools, it still didn’t seem like it had the community that perhaps Disney was looking for.

What’s sad about this is that I think in a few ways Avalanche was maybe starting to think that the toy box wasn’t quite enough to sustain Infinity as you can tell by how much more enjoyable the play sets were in Disney Infinity 3.0. Though I didn’t play either of the three Star Wars play sets, the combat mechanics, further refined by Ninja Theory (DMC, Heavenly Sword) which you get a taste of in the opening of the game, felt like they would be not out of a place in a game skewed much older. The play sets I did play, Inside Out and Marvel Battlegrounds, were far more experimental than anything seen in the previous game. The former was a throw back, in a good way, to the 3-D plat-formers and licensed games of the PS1 and 2 era, while the latter was a four player brawler that significantly changed the way the characters played in-game. That’s not to mention the expansion games, especially Toy Box Speedway, that brought Kart racing to Disney Infinity and would’ve been a great basis for a standalone game just built around those mechanics.

When the press release came out yesterday about the shuddering of Disney Infinity, a reason given was that there was a lot of inventory tied up in unsold toys, which was also a cause for a decline in revenue in the game in 2015 as well. This is something that is also not that surprising to me as my second biggest problem with Disney Infinity is that it had a lot of great characters, but no real world in which for them to inhabit, a sentiment that felt after I jumped head first into one of Infinity’s major competitors: Lego Dimensions.

In late 2014 I, like many, went and saw Disney’s Big Hero 6 and absolutely fell in love with it. The entire time I was watching that movie I kept thinking to myself “I WANT ALL THE TOYS OF THIS” and got the Infinity figures of Hiro and Baymax…and put them on my shelf, never to be scanned into the portal. I had a similar thought after I saw another Disney movie this year, the wonderful Zootopia, and I nearly purchased the Judy Hopps Infinity figure until I told myself sadly that it would just sit on a shelf. To me at least, it’s not enough to have Zootopia characters; There also has to be a Zootopia world for me to explore and play around it, which is what Lego Dimensions, Disney Infinity’s competitor that arrived last year, gets so right. 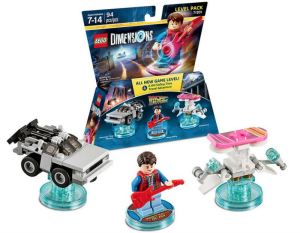 Lego Dimensions has a lot in its starter pack for the high asking price: a fun to assemble portal, three mini figs, a Lego Batmobile, but most importantly, a decently long game with lots of post game content. Like Disney Infinity, it too had expansions in the form of levels and characters, but the main and most important difference is that these characters encouraged you to keep playing the game. When I bought the Portal 2 level pack for example, I not only got a new stage, a new adventure world (small, open world areas for each of Lego Dimensions franchises to the uninitiated) but a reason to return to levels and worlds I had already completed because I had an ability that I didn’t have before. Disney Infinity figures level up and have really long skill trees that allow players to customize them to their play style, but it really means nothing to a player like me when I view the figures as attractive statues above all else.

Now that Disney has ceased its own publication and moved into licensing their franchises to other game companies, there is a way that maybe we can still see brands like Disney, Star Wars and Marvel survive in the toys to life space, and that’s as part of Lego Dimensions. Though it sadly wouldn’t replace the jobs lost by the closure of Infinity, it’s not out of the realm of possibility to see any of Disney’s franchises migrate to their former competitor in the space. WB Games has a large stake in DC Comics, as parent company Time Warner owns them, but that hasn’t stopped them from publishing games like Lego Marvel Super Heroes, Lego Marvel’s The Avengers as well as the upcoming Lego Star Wars: The Force Awakens. In the toy space, Lego also holds the rights for Marvel, Star Wars, and most recently has produced a new line of mini figs based on popular Disney characters as well.

Can you also imagine the importance and coverage that Lego Dimensions would get if suddenly they were allowed to use Disney’s brands in their game? Should this, let’s face it, wishful thinking become reality, Lego Dimensions could possibly be the first game where Marvel characters could co-exist with DC characters legally (The Revenge of Shinobi on the Sega Genesis would be the first time, though these were unlicensed likenesses that were too similar to be coincidence). A strength of Lego Dimensions outside of its collection of brands is the humour found in the situations when a character like Batman meets the cast of The Wizard of Oz, and I can only imagine what the creative folks at TT Games could come up with if Superman and Spider-Man ever crossed paths.

This piece may sound a little harsh on Disney Infinity, but even though I didn’t exactly love the game itself, I still do not regret the money I’ve put into the franchise. You can tell that the people who were responsible for making Disney Infinity loved not only the game they got to make, but the brands they got to put into their game, and the saddest thing to come out of the cancellation of Disney Infinity is that I feel that this year and a possible 4.0 edition could have been a huge leap forward for the franchise. Unfortunately all we can do at this point is wonder what might have been and hope that the displaced staff get to apply their talent elsewhere.