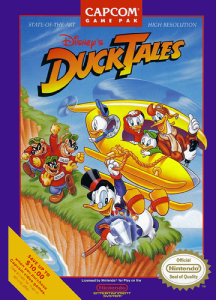 In 1952, writer/artist Carl Barks introduced the world to Uncle Scrooge, an obscenely wealthy adventurer from the city of Duckburg. The character debuted in a Donald Duck story, but became so popular that he became the star of his own book for many decades and those exploits were eventually adapted into the beloved animated series, DuckTales. Like any property that’s big enough to cross over into multimedia, this often means that someone will want to make a video game tie-in, and in 1989, Capcom brought DuckTales to the NES. Licensed games, especially in the NES days, are things that people tend to avoid because with a few exceptions, they’re made to make money off of a known quantity, but in the case of DuckTales, it’s of the most popular games on the NES that has warranted getting a Game Boy port, a remaster in 2013, a rerelease in 2017, and has mechanics that have influenced one of the biggest indie hits in recent years with Shovel Knight.

Once upon a time, video games came with things called instruction manuals, which were books that had pages of things like a game’s controls, enemies and story. Those looking for story in DuckTales have to find it within the instruction manual because none of it is communicated within the game itself. What is present in the manual is very little: Essentially Scrooge McDuck, the wealthiest duck in Duckburg, is out to make himself richer by tracking down ancient hidden treasures both in the world and in the stars. It’s a simple premise, but one that provides necessary context for having Scrooge, his pilot Laundpad McQuack, and company travelling from the top of the Himalayas to the moon.

As a lot of the staff who worked on DuckTales also worked on Capcom’s Mega Man series, it’s a non-linear game where you can plot your path through the campaign however you wish. This setup gives newcomers, if there’s any left at this point, an opportunity to get a feel for each of the stages before coming at the conclusion of how they best want to tackle the five stages; Whether it’s saving the moon for last because you want to hold off on its excellent level music or doing the levels that have hidden health power-ups first to give you a better opportunity to complete later stages with the extra hits added to your life meter. Levels are similarly non-linear, but never so big that you’ll ever got lost. Intrepid explorers are rewarded with extra lives, items that give you more chances to get hit, and treasure to increase your overall score. 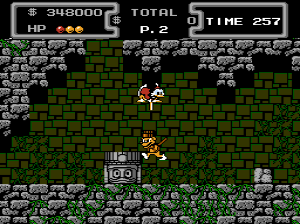 The primary way in which Scrooge interacts with his world is via the use of his versatile cane. He can use it as a pogo stick to kill enemies and also use them as leverage to get to out-of-reach platforms, open treasure boxes or as a golf club to use objects in the environment to get out of reach nuances out-of-the-way. Starting out it can be tricky to get used to the feel of the pogo mechanic as you have to first jump and then hold down plus the B button to initiate it, a far cry from most action/plat-formers where you just have to jump on enemies, but it doesn’t take very long to get the hang of things and once you do, bounding around the varied levels is pure joy. DuckTales is a pretty simple game, as save one power-up that acts like a star from Super Mario Bros., you don’t get any additional abilities but the way in which the designers thought of different ways in which to either get around a level or fight enemies makes up for that.

The five levels that make up DuckTales: The jungles of the Amazon; A haunted castle in Transylvania; A deep mine in Africa; A frozen Himalayan mountain top and a spaceship on the moon couldn’t be more different from one another, and it’s this diversity that makes playing through DuckTales so much fun. Not only do you get a lot of different environments, but each stage presents itself with unique hooks for the few moves that you have. In the Himalayas for example, you’ll get stuck in soft snow if you try to pogo so you have to make sure to hit your targets dead on and in Transylvania you have to defeat mummy enemies by hitting the ball-and-chain attached to their legs when they crowed around areas with low ceilings. These are just the few of the many instances of how Capcom took a simple concept and expertly crafted levels where each stage feels different from the next despite your character only ever really doing less than a handful of actions. This is also true of the bosses that make up DuckTales, and while they may not the make up most challenging lot assembled in an NES game, they nonetheless each present different challenges that test your skills with DuckTales’ controls.

Capcom games in the 8-16 bit era were known for their exceptional soundtracks and DuckTales is one of the easy go to examples of this. If you’re familiar at all with DuckTales and reading this now, you’re in one of two camps: The first is those who have the earworm of a theme song stuck in your head, or the other who are just recalling the memorable themes from every level. Everyone has their personal favorite level theme from DuckTales with some being more popular than others, but while you can argue over which on is the best, there’s not a bad one in the bunch.

DuckTales is very much deserving of the praise that’s heaped upon it, but it’s not exactly a perfect game. For one, it’s a very short game, and even with three difficulty settings and the lure of high scores by tracking down hidden treasure, it won’t take you anymore than a half an hour to see everything it has to offer once you’re good enough. Secondly it’s both easy, but at the same time challenging. No continues mean you have to start over from the title screen once you lose all your lives, but it won’t take very long until your good enough where this shouldn’t become an issue. Finally, the Transylvania stage is recycled far too much as you have to enter it three times before the game is done, with the second time being redundant and the last one being as part of the game’s disappointingly easy climax. 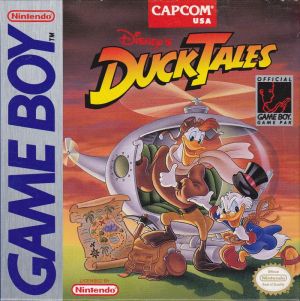 Capcom also ported DuckTales to the Game Boy, and for the most part it’s a one-to-one conversion of the NES game with a few minor tweaks to the levels to make it worth buying even if you’ve played through the NES game more times than you care to admit. Be prepared to struggle with the controls however, as while DuckTales on the Game Boy is true to the NES game, be prepared to take damage from pogo attacks that don’t connect like you feel they should and ropes that you’ll fall from that you swore you grabbed onto. I died countless times in the moon stage just trying to get into the space ship because I had to hit the chain to get into it just right. Otherwise though, this is a great way to play DuckTales on the go.

What really can be said that hasn’t been said about DuckTales by countless others before. It’s a classic game with tight controls, beautiful and varied levels with one of the best soundtracks of any game across all generations. What’s great about now is that you don’t even need an NES in order to play it thanks to the Disney Afternoon Collection that was inexpensively released earlier this year on PS4, Xbox One and PC. Now a whole new generation can fall in love with this game like people did when this game was brand new. There’s very few reasons not to own this game in some capacity, whether you wish to own the NES cart, the flawed but still highly playable Game Boy conversion or the flawless conversion found within the Disney Afternoon Collection.