Since the 1995 release of Justice League: Task Force, there’s been six unique games to feature the name “Justice League” in their title, yet none of those games could really be considered the definitive game to feature the team. That’s not a slight against DC Comics, as the same could be said about Marvel’s Avengers, yet at the very least you could create a pretty solid Avengers game in the Marvel Ultimate Alliance series from Activision. Justice League Heroes, which can easily be considered the best Justice League game, tried to do what the MUA series did, but because of how it restricted the player: you could only have teams of two and most of the time you couldn’t pick your team, you never truly got the same feeling of creating your own dream team of heroes like you did in Activision’s comic book inspired action-RPG’s. Like how the best Avengers game (at least so far) doesn’t have the word “Avengers” in the title, the same can be said of DC’s Justice League. If you’re getting out of the film and want to play as the team in video game, why not try these games instead of those that carry the Justice League name. 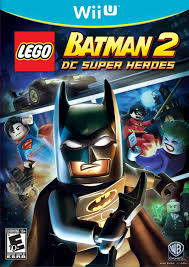 Lego Batman 2: DC Super Heroes did a lot of first for a Lego title: It was the first to have fully voiced characters, it debuted the open-world hub world that would further be expanded upon in the Lego Marvel games and it was the first time that other DC characters other than Batman and his family of partners and villains were  playable characters. Most of Lego Batman 2 is a Batman game with only Superman playing a major support role throughout the campaign dealing with Lex Luthor teaming up with Batman’s arch nemesis the Joker. In the games conclusion though, the entire Justice League is on hand to help and it’s a terrific payoff to a very enjoyable game. Upon completion of the story, you can then explore Gotham City as any member of the League once you find and unlock them in the open-world Gotham City area and then use them to your hearts desire in search of collectibles in the form of red and gold bricks. In true Lego game fashion, you can play through levels again one you beat them in freeplay mode which allows you to pick from anyone you’ve unlocked in your roster. 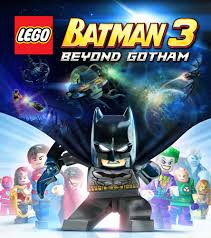 The following, and to date, final Lego Batman game, 2014’s Lego Batman 3: Beyond Gotham shouldn’t almost have not been a Batman title, but rather Lego DC Super Heroes or the seventh official Justice League game. The opening few stages take place in Gotham City, but the rest of the game is essentially a Justice League and expanded DC Universe title where the Justice League must form an uneasy alliance with Lex Luthor and other villains to stop Brainaic. Trademark Justice League locations like the Hall of Justice and the Watchtower appear during the campaign and can be explored similarly to Gotham City in Lego Batman 2. 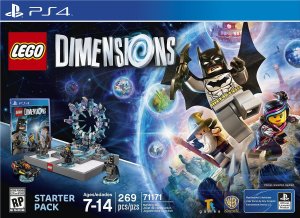 Out of the box, the only Justice League member that you can play as in Lego Dimensions is Batman, but you can buy fellow Leaguers Wonder Woman (complete with her invisible jet!), Cyborg, Superman and Aquaman. The only character from the Justice League film who isn’t playable is the Flash, however he does make a few cameos in the few DC themed Adventure Worlds, which are the Dimensions equivalent of the open-world sections from standalone Lego games. As Batman is in the starter pack, you’ll have access to the DC Comics Adventure World immediately but buying things like The Lego Batman Movie Story Pack or any of the Teen Titans GO! characters will give you more DC themed areas to explore. The Hall of Justice as well as a lot of the Justice League play a large part in a lot of the side-missions in the The Lego Batman Movie Story Pack which will also give you Batgirl as well as Robin (who can transform into Nightwing). 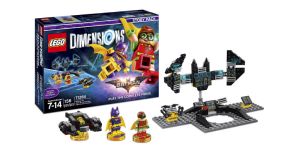 The Justice League are no stranger to crossing over with properties outside of DC, just recently the Teenage Mutant Ninja Turtles were revealed to be coming to Injustice 2, so you can have fun writing your own head cannon reasons as to why Aquaman is meeting up with Doctor Who to fight Lord Business from The Lego Movie in the Springfield nuclear power plant from The Simpsons. Unlike traditional Lego games, no character is locked until you finish the main story so you can throw on your collection of Justice League characters as early as level one, provided you bought them of course. Sadly the cancellation of Lego Dimensions means that there will be no future DC characters or worlds added, but for those who held off getting into the game, you may be able to start finding packs heavily discounted.

INJUSTICE: GODS AMONG US AVAILABLE ON: PS3/PS4/XBOX 360/XBOX ONE (VIA BACKWARDS COMPATIBILITY)/WII U 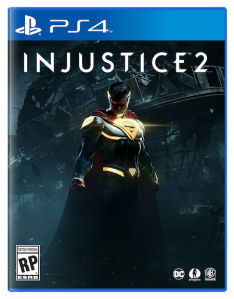 You might call a parallel universe where Superman rules the world as a benevolent dictator and is opposed by an underground team of heroes and villains led by Batman a stretch as a good example of a Justice League game, however there’s still plenty of team spirit to be found in Netherrealm’s terrific series of fighting games. In Injustice: Gods Among Us, a united Justice League is pulled in from a parallel universe in order to help Batman’s team of rebels put an end to Superman’s regime so you do still have a heroic Superman to contrast against his broken Doppelganger. Gods Among Us’ sequel, Injustice 2, focuses solely on the world and those who live in it where the tragedy occurred that made Superman turn his back on humanity, however heroes and villains from both sides put away their differences temporarily when Brainaic arrives from the stars. There’s a chilling moment in the story mode that I won’t spoil here where Superman and Batman  stop to reflect on the days of the Justice League and the events that brought them to where they are now.

If you’re all in on DC”s extended universe of films, the Injustice series is the best DC story ever told and features many of the characters that have appeared in DC’s films since 2013’s Man of Steel. The fighting mechanics are simple enough to pick up in Injustice and there’s plenty to do offline if you have no desire to play with others online. Both games are worth picking up for their excellent story modes alone and if you act fast, you can unlock can Justice League gear for Wonder Woman, Batman, Flash, Cyborg and Aquaman the game’s Multiverse mode.

One thought on “IF YOU WANT TO PLAY AS THE JUSTICE LEAGUE IN A VIDEO GAME, TRY THESE TITLES”