In previous years around the holiday season I’ve looked at comic book games with a Christmas twist such as Batman: Arkham Origins, the many games inspired by Tim Burton’s Batman Returns, and Snoopy Vs. The Red Baron. While growing up, video games were of my most coveted Christmas gifts as it was only really around that time of year when I added more to my collection, but something I loved getting just as much as video games was toys which rings true even today at thirty-three years of age. In the same way I looked at Christmas themed video games in previous years, this year I wanted to instead talk about toys both past and present that are based either directly or loosely on comic book video games. This shouldn’t be seen as a buyers guide as a lot of the collectibles I’m about to talk about are quite pricey (but if you’re flush with cash and want to send something my way feel free to reach out to me, no pressure) so don’t bother circling your screen, phone or tablet as a hint for your friends and loved ones. Now join me won’t you to look at some toys and relive those nostalgic days of looking through the likes of the Sears Wish Book as you counted the days on your chocolate advent calendar leading up to December 25th.

Maximum Carnage didn’t start out as a video game, but if you bring up the name with most people, they’ll talk about the game over the bloated comic book series in which it was based on. Original Marvel toy rights holder and now defunct company Toy Biz released a series of two and three packs of action figures starring the main trio of the game: Spider-Man, Venom and of course, Carnage. The package is branded as Maximum Carnage with the title character looking a little like he does on the package of the video game, however these were not new figures, rather just the same figures used in the first wave of the series based on Spider-Man: The Animated Series from the 90’s: 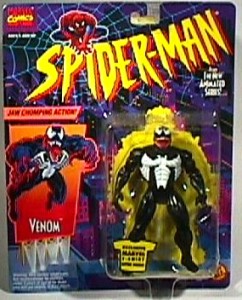 Separation Anxiety very loosely borrowed plot elements from the Venom: Lethal Protector mini-series wherein Spider-Man had to team up with Venom to battle symbiotes that were forcibly harvested from Venom. Those new symbiotes were used as bosses in Separation Anxiety, taking the place of Shriek, Doppleganger and others from Maximum Carnage. Some of these new symbiotes received action figures under a line from Toy Biz called Venom: Planet of the Symbiotes and it was in this series that some of these characters were actually named for the first time: 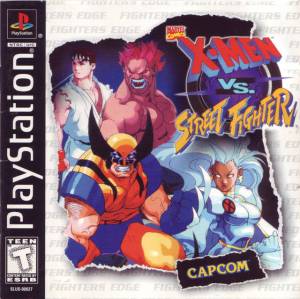 Toy Biz was mainly known for making toys based on Marvel properties, but in the late 90’s, they branched out into video game IP’s as well in their Video Game Super Stars line, producing figures based on everything from Tomb Raider to Nintendo properties like Mario Kart 64 and Diddy Kong Racing. Within this line were a series of two packs based off of Capcom’s Vs. Series of fighting games: Marvel Comics X-Men Vs. Street Fighter:

As well as the original Marvel Vs. Capcom: 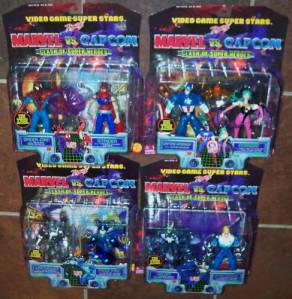 In the short few months in which it has been on shelves, Marvel Vs. Capcom: Infinite has already received two different types of toys. The first is a singular action figure two-pack of Iron Man and Mega Man X:

Which was followed by five two packs of Pop! Vinyl bobble head collectibles from Funko:

It’s great that you can walk into the likes of Target or Gamestop (EB Games in Canada) and buy Marvel Vs. Capcom themed toys, but in the case of Toy Biz’s offerings, they were something special, especially the Marvel Vs. Capcom two-packs. Mega Man was back then, and still is now, my favorite video game character but there wasn’t a lot of toys made of the character in the 90’s so it was awesome to see him as an action figure alongside other Capcom and Marvel characters. I sadly never ever saw any of the X-Men Vs. Street Fighter or Marvel Vs. Capcom Toy Biz two-packs in the wild, but I remember staring holes in the pages of Wizard magazine looking at them and wishing I could have them. 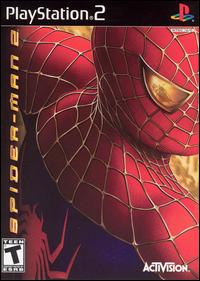 For both Sam Raimi’s Spider-Man and its sequel, there wasn’t really many characters  to turn into action figures other than Spider-Man and the movies sole villain; The first line of Spider-Man movie figures featured J.Jonah Jameson with desk pounding action and Norman Osborn complete with easy chair. For Spider-Man 3, there were more than enough characters packed into that movie for action figure fodder, yet Toy Biz also expanded the line with villains not seen in the film based on their appearances from the Spider-Man 2 and Spider-Man 3 video games including Mysterio and the Rhino: 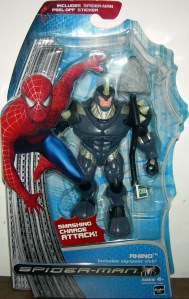 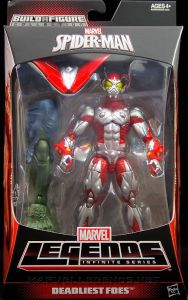 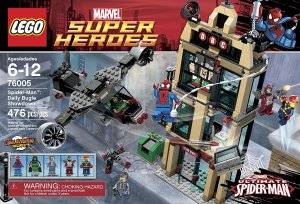 IRON MAN AND THE INCREDIBLE HULK 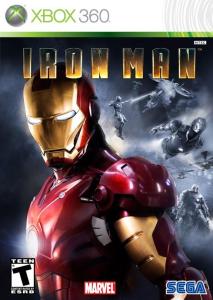 At the dawn of the Marvel Cinematic Universe, two films were released a little over a month apart from each other in 2008: Iron Man and The Incredible Hulk, both of which were the subject of video games by Sega. As it is with most movies, action figures were released alongside both. What’s interesting about the respective lines for these films is each were expanded by including characters that made up the extended roster of bosses that you encountered in Sega’s video games; The Incredible Hulk Bi-Beast and Ironcald action figures even went on to have an “As Seen in the Video Game” qualifier on the packaging: 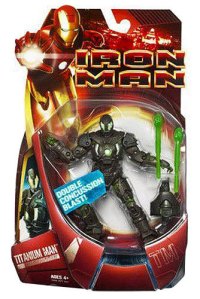 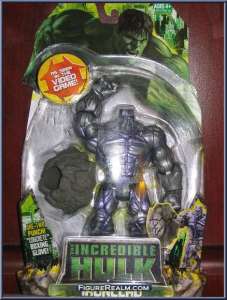 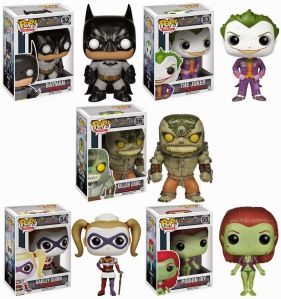 Technically speaking, every Lego set featuring the Dark Knight could be seen as a promotion product for the Lego Batman series of video games, but it was McDonald’s via their Happy Meal toy line that holds exclucivity for toys based on the Lego Batman game series. Released to restaurants around the same time the first game came out in 2008, the Lego Batman Happy Meal series was made up of the heroes, villains and vehicles from the premiere entry in the series. Though they resembled the minifig style as seen in the game and Lego’s toys, the character figures like Batman, Robin and Joker were far more dynamic looking than any traditional minifig: 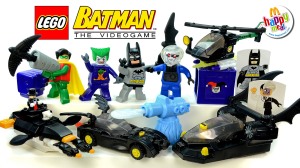 While there hasn’t been much consumer level action figures released for Injustice 2, that certainly wasn’t the case for the first game in the series, Injustice: Gods Among Us. Taking a page from the merchandise released for the Marvel Vs. Capcom series, several two-pack action figure sets were released based on the likes of Aquaman and Black Adam as they appeared in the game. A line of figures that was once home to DC figures from across the multiverse, DC Comics Unlimited, was home to several Injustice: Gods Among Us figures including Batman, Superman, Green Lantern and the Joker. Bandai’s figarts line too housed the first Injustice, producing a version of Batman, Superman, Joker and Harley Quinn:

McFarlane toys has been the sole producer of action figures based on every incarnation of Robert Kirkman’s The Walking Dead from the comics to the show and sometimes even video games. Telltale’s The Walking Dead season one protagonist Lee and Clementine as she appeared in the series second season both got the action figure treatment from McFarlane:

Like Marvel Vs. Capcom: Infinite, Guardians of the Galaxy: The Telltale Series will see a small wave of Pop! Vinyl collectibles arrive in stores before year’s end. The announced Pop! so far have been Gamora, the series villain Hala the Accuser and a two-pack featuring Rocket and Lylla as they appear in the series second episode:

Are any of these in your collection or are you hoping to see some of them wrapped up under your tree? Post pictures in the comments below or talk about your memories of feverishly flicking through pages of catalogs and flyers drooling over toys you wanted for the holidays.