When it launches later this year, you won’t be able to play Marvel’s Iron Man VR with just your PlayStation 4 like you did with Marvel’s Spider-Man in 2018. As the name states, this is a VR title and thus requires the PlayStation VR headset as well as two PlayStation Move controllers if you want to step into the armor of Tony Stark. This isn’t the first time that a Marvel video game required more than just a console or PC just to experience it as there have been many examples over the year of games like Marvel’s Iron Man VR that require extra equipment to play.

CONSOLE: The unit itself

Before the Wii Remote and the Kinect, there was N-Vision’s Spider-Man 2 plug-and-play game. It’s difficult to say how many people have actually spent time with this unit, but according to the archived commercial you plug the console itself into your TV – or VCR – and then attach the controller which is made up of three sensors: two for your arm and a third that goes on your leg. The selling point was to make you feel like Spider-Man as you punch and kick the air and make the “thwip” motion to shoot webs, but given how imprecise Nintendo’s take on motion controls were at times, it’s doubtful this thing functioned as well as the commercial says it does.

Released in 2006 against the Nintendo Wii, Sony’s PlayStation 3 and one year into the life of Microsoft’s Xbox 360 was Mattel’s HyperScan, a console that during it’s short lifespan became home to three exclusive Marvel video games: X-Men, Marvel Heroes (not to be confused with the now defunct MMO) and Spider-Man. The latter two were boiler plate side-scrolling action games while X-Men was a one-on-one fighting game, but the common ground of the three games was that you had to purchase cards that would give you power-ups and in the case of X-Men, the characters that made up the game’s roster. Had the Angry Video Game Nerd not done a video about the HyperScan a few years ago, most people probably wouldn’t know it exists and with good reason. As James Rolfe points out when playing his character, the HyperScan’s games barely look better than a Sega Genesis game and had load times of over one minute in the case of X-Men. 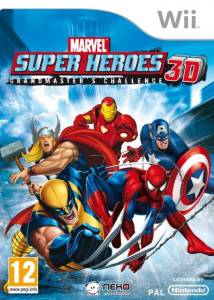 To say that Marvel Super Heroes 3-D requires an add-on is a stretch, but it was very much sold around the premise of being able to play in 3-D regardless of your TV. This PAL exclusive is set-up like a boardgame where you can eventually play brief first-person vignettes as characters like Captain America, Iron Man, Spider-Man, Thor and Wolverine. This could be viewed using classic red-and-blue 3-D glasses which the game came with and the gimmick is that they took the shape of the characters that were featured in the game. If you can get a copy of this that still comes with the glasses, it might be worth picking up for the right price for that alone.

The third and final Marvel Super Hero Squad game, Comic Combat is a decent idea for an extension of that brand just for the wrong platform. Comic Combat controls like some of the more interesting Nintendo DS games where you tap on the uDraw, a tablet add-on released by THQ, to move your team of heroes and draw simple shapes to activate your powers. The problem is this game wasn’t on either of Nintendo’s dual-screen handhelds and instead had to be played on a TV with a peripheral that barely had any interesting games that supported it, thus it wasn’t really worth buying just for one game. Worse still is that the uDraw tablet, at least in its second itieration for the PS3 and Xbox 360, was such a failure that it financially crippled THQ, preventing us from getting an Avengers first-person game they had in development that would have launched in 2012. 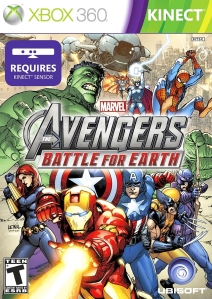 With the unfortunate cancellation of THQ’s Avengers game, Ubisoft swooped in to fill the void with Marvel Avengers: Battle for Earth, a better than it had any right to be motion controlled fighting game, at least on one platform. The Nintendo Wii U version doesn’t require anything more than the tablet that comes with the system, but it’s also a very dull experience as you don’t even play the game on your TV, instead looking at the tablet controlling doing simple swipes. Where Battle for Earth is far more enjoyable is on the Xbox 360, provided you have the Kinect motion tracking camera. Combat in Battle for Earth plays out in a rock-paper-scissors manner where moves come in one of three types and you have to use the proper one to beat your opponent. The dorky, but also kind of rad, part of pulling off these moves is the motions you have to make, like sticking your hand in the air to launch a line with either Black Widow or Spider-Man to then follow it up with a swinging kick. If you can get over how silly you look, Battle for Earth is a lot of fun, tracks your motion really well and can also be a bit of a workout if you want it to be.

CONSOLE: Microsoft Xbox 360 and Xbox One, Nintendo Wii U, Sony PlayStation 3 and PlayStation 4

The toys-to-life genre of games, those that required you to connect a base to your console which brought figures to life in a video game, burned hot and bright for a few years before sadly dying out like the plastic instrument craze. Disney’s entry in the genre, Disney Infinity, introduced Marvel characters into its second iteration, allowing you to play mini-campaigns starring The Avengers, Spider-Man and the Guardians of the Galaxy while also letting you to mash them all together in the toy box creation mode. Though the third entry would primarily be themed around Star Wars, it still found room to bring in some new Marvel figures like Black Panther, Ant-Man, Vision and a few others and a terrific 3-D fighting game play set, Marvel Battlegrounds. Not a day goes by that many wish that Infinity hadn’t gone away, both because of how better the games were getting year-over-year and how great the small statue figures that came to life in the game looked  when displayed on your shelf.

Marvel’s Iron Man VR won’t be the first Marvel branded VR title, with that honor doing to the Sanzaru Games developed Marvel Power United VR. Exclusive to the Oculus Rift platform, Powers United VR allows you to play as characters like Spider-Man, Wolverine, Star-Lord and Black Bolt as you battle waves of enemies and villains like Venom and Magneto either alone or with friends. The barrier to entry for this game, like Iron Man VR, is that you not only need the headset, but also the rig to run it, though that will become less of a concern with the impending release of the affordable, less clumsy Oculus Rift S and Quest redesigns which cut down on cables and cameras, even the PC in the case of the Quest.