Nestled on the eastern side of the island of Newfoundland on the Avalon Peninsula is the town I grew up in: Harbour Grace. A tidbit on Wikipedia puts the population of the town at around 3,000 people as of 2006, but I would wager it has shrunk by a significant margin since then. Today you’ll sadly find more people moving into the local funeral home than a brand new house. Where once the town was full of families with kids, now you’ll find an aging population living out the remainder of their lives.

The march of progress has been quietly eroding away at Harbour Grace for years. Years ago people had to pass through in order to get to places like the big city, St. John’s, but an extension of the Trans Canada Highway – the only road in Canada by the logic of South Park – meant that people could bypass the town completely. At a connecting juncture to the highway, you’ll see a plane, the Spirit of Harbour Grace that has seen better days, and the SS Kyle, a steam ship that has been stuck in the harbour for decades, rusted to the point where I’m surprised it hasn’t broken in two. As of a few years ago, the town lost its only grocery store so if you need anything you can’t buy at a gas station, you better hope you have a car so you can go to the next town over.

For those who have spent their lives there, or who have visited, there’s certainly a beauty to the town though. If you’re accustomed to city life, it can be whisper quiet at points, and on a clear night in the summer, you can see every star in the sky. It’s easy to find a vantage point where you can just sit there and take the entire town in, watching boats bouncing on the water as they come and go out of the harbour. There’s a secret swimming hole whose location was passed down from my dad to me that I still visit with my parents that is affectionately dubbed “Rocky Pond” because of the large rock in the center you can dive off of. If you saw it, you would understand why my parents wish to have their ashes scattered over it one day. 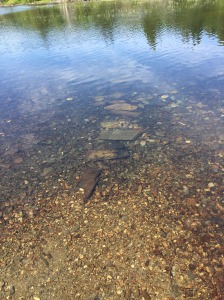 Rocky Pond on a still day in the summer.

If you stop to venture into the town, it won’t take you long to see everything the town has to offer. There’s little in the way of businesses or restaurants, but there’s plenty of old churches and historic buildings for those who are into that sort of thing. Personally speaking, I’m not, though a part of me always wish I was.

A lot of what people love about Harbour Grace was lost on me growing up. Even at a young age, I never felt comfortable with the small town life. I would be far more content exploring a big department store, perusing the toy isle, meticulously looking at the back of action figure boxes making a mental checklist of things I wanted to add to my collection, or pressing my sticky fingers against the video game display case while I stare a hole through the glass. Like the episode of The Simpsons where Bart craved a copy of Bonestorm, I’m sure I thought more than a few times if I looked sad enough standing there someone would buy me a video game.

My interests didn’t make me the most popular kid in my hometown, and that’s probably a big reason as to why I couldn’t wait to leave. Most kids my age wanted to play sports or lusted after ATVs and dirt bikes so they could dangerously zoom up our empty streets. I liked going outside to an extent sure, I wasn’t a complete shut in. I loved swimming in the summer and riding my bike around town, but when you’re the kid who loved adventuring in the mystical land of Hyrule, the setting of Nintendo’s The Legend of Zelda series, you quickly learned those short cuts that steered you away from where the bigger kids routinely hung out.

Overlooking the town of Harbour Grace not far from my parent’s home.

Given how insane the world can be to navigate with the mass acceptance of smart phones and social media, I’m glad that I got to grow up when I did. Another part of me though is very envious of how the pop culture landscape has changed today. Good luck attracting the opposite sex during my day if you loved something like Dungeions & Dragons, now countless groups stream the table top role-playing game  on the popular site, Twitch, and even make a living doing it. I was endlessly teased as I still loved Spider-Man and Star Wars during my pre-teen days,  now they’re part of multi-billion dollar motion pictures and shared cinematic universes. It’s hard not to go out nowadays and not see someone wearing a shirt with the Avengers logo on it or one the heroes that make up their ranks.

What’s most important is that I survived, if I didn’t, I wouldn’t be here to tell you this story. Besides, whenever I needed an escape, all I needed to do was turn the TV to channel three, pop a “Nintendo tape” in my NES and lose myself in a virtual world.

One thought on “CHAPTER 1: HARBOUR GRACE”