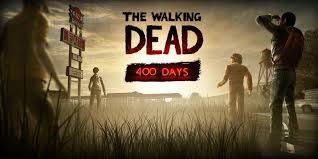 If the main draw of the first season of Telltale’s The Walking Dead was the journey and developing relationship between Lee and Clementine, 400 days may come off as a bit of a disappointment to you. However if your love for the series is due to Telltale’s ability to grip you with a well developed cast of characters and story, 400 days is the desert (or appetizer if you will) you’ve been waiting for.

You start the expansion in front of a billboard where you’re given the choice of five different characters (for the purposes of this review my order was Vince, Wyatt, Shel, Russell and Bonnie). Each chapter can be completed any way you wish as they don’t share a common character or thread, but you will get subtle references spread across the five chapters.

With a lack of a main character you’d think 400 Days would lose some of what made The Walking Dead video game so special, but it really doesn’t. In fact, it cements just how much Telltale has honed their story telling skills in the adventure genre. Completion of 400 Days shouldn’t take you more than an hour and a half and you spend a short amount of time with each of the characters (about 15-20 minutes a piece) but it’s simply astounding about how much development they’ve managed to squeeze into such short stories. Some tales (like Vince and Wyatt) barely involve any exploration, in fact you’re stationary for most of, if not all, their chapters but you still have an invested stake in what happens to them. One of the negatives points about 400 Days is that you’ll want to spend more time with each of the cast by the time you get your achievement marker indicating it’s time to move on, but I’m hopeful they’ll make an appearance in this fall’s Season Two.

400 Days gameplay will be familiar to anyone who played The Walking Dead: you control character with one stick and use the other to scan the environments for things and people to interact with. There is a heavier emphasis on action bits in the expansion, like shooting and even a game or rock, paper scissors, but you’re still come across the same well written as well as acted dialogue conversations and make powerful gut-wrenching difficult decisions that made Season One a Game of the Year nominee and winner.

You won’t see any of the cast appear from Season One in 400 Days nor get any closure to the conclusion of Lee and Clementine’s story, and I’m glad Telltale made this decision. It allows the chapters in 400 Days to stand on their own and not be shackled as an epilogue or stepping stone to what comes next. That being said, choices you made within Season One will affect conversations within 400 Days, but they’re nice subtle “aha!” references as opposed to being shoved in your face which is both clever and welcome.

If The Walking Dead: 400 Days had a television infomercial it would promote getting five stories for the price of one, and it would not be a lie. For the small price of 400 MSP you get a handful of excellently crafted stories that you wish didn’t have to end. Now more so than when I completed Episode Five of The Walking Dead, I want Season Two to come sooner rather than later. Go buy and play this, I promise you will not be let down.