If the Game Boy Advance version of X2: Wolverine’s Revenge didn’t have the aesthetics from comics that were published around the year 2000, it would be easy to mistake it for a long lost game from the SNES and Genesis era. Simply put, this game was quite a surprise and well worth checking out.

Crafted by Vicarious Visions, who were no stranger to the GBA hardware having brought Tony Hawk to the system as well as Spider-man, X2: Wolverine’s Revenge on the GBA shares only a name with its older console sibling. It has a different story, different locations like the X-Mansion as well as bosses that do not make an appearance in the console version such as Pyro and Omega Red. Thankfully as well, the game is an action game but you can play certain sections stealthy if you like with the added bonus of being able to fight your way out should you get caught.

At the start of the game you have a simple set of abilities: you can run, jump, attack, dash and retract your claws. There is no penalty to having your claws out, however you do recover health when they are retracted. As you progress through the levels in the game, you’ll pick up new abilities to add to your arsenal such as a slide technique and a Mega Man X style wall jump maneuver. While the new mechanics are nothing new or incredibly innovative, the fact that you have something new to play with as you progress helps the game stay fresh and it stops the player from being overwhelmed with having too much thrown at them at once. Certain power ups will let you locate hidden collectibles in previously beaten levels which you can access anytime from a menu and this adds a level of replay value.

The levels in X2 for the GBA won’t provide much of a challenge for seasoned 2D action game players, but they do pose some decent platforming challenges later on in the game. Where the game really shines is in its boss encounters, in particular the boss fights with Omega Red and Pyro. Your action reflexes will be put to the test in those fights, avoiding obstacles and learning patters all the while strategically sheathing your claws in hopes that you’ll gain just enough health back to finish off them off. 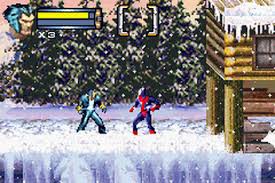 f I had to file some complaints for X2 on the GBA the first would be the games length. There are around nine to ten levels that you can breeze through rather quickly if you’re familiar at all with these type of games. There are also unfortunate sections where there will be a few cheap deaths where enemies will be placed in a particular location that will knock you into an unavoidable pit fall, but these situations are minor at best.

I’ve played a lot of handheld versions of console games and I could probably count on one hand the cases where the portable version is recommendable over the console version, and I’ll gladly count X2: Wolverine’s Revenge on the GBA in that list. Anyone looking for a short but sweet 16-bit 2D action game starring Wolverine should look into tracking this game down.