It’s time to look at another three Marvel games that were simply never meant to be. 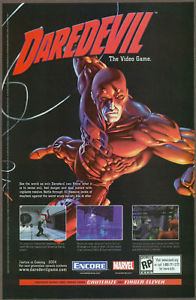 Daredevil was being positioned as another big multimedia franchise from Marvel during the turn of the century. The comic series was a best-selling series under the Marvel Knights brand thanks in no small parts to writers like filmmaker Kevin Smith and long time Marvel alum Brian Michael Bendis. The character was also getting the big screen treatment from 20th Century Fox, who helped kick-start the modern comic book movie craze with X-Men in the year 2000. It didn’t hurt that the film had a lot of talent behind it, including future Batman Ben Affleck, future Mrs. Affleck Jennifer Garner, future Iron Man director Jon Favreau, and Colin Farrell.

Where there’s a movie, there’s a high percentage that a game will follow and in the case of Daredevil, there was to be two: A handheld game on Nintendo’s Game Boy Advance that was released and a console game for the sixth generation of consoles, both from publisher Encore entertainment. The game was in limbo for some time, missing the release dates of both the film and its eventual release on DVD in 2003. It was officially cancelled in 2004 when the Nararre Corporation, the parent company of Encore, shut down its development branch which at the time consisted only of Daredevil. You can see a concept trailer of what the game would’ve looked like, and frankly it appeared to be quite promising.

From the start and through to the end of Phase 1 of the Marvel Cinematic Universe, all movie tie-in games were handled by publisher Sega and a revolving door of developers. When it came to putting the band together for the inevitable Avengers game, the license shifted from Sega to THQ who put their Australian studio, Blue Tounge Entertainment, on the title. Blue Tounge had a history of developing licensed games for THQ having worked on everything from Jurassic Park, several Nickelodeon projects, and even the first Marvel Super Hero Squad game.

Had the Avengers had come out, it would have gone down as the first ever first-person Avengers game, as well as the first ever Avengers game that debuted on a home console. The story of the game had nothing to do with the film, and was being handled by Brian Michael Bendis who based the game on the Secret Invasion event that dealt with the alien race known as the Skrulls infiltrating the ranks of the Marvel Super Heroes. Video of the games preview build showed that Captain America, Thor, Iron Man and the Hulk would be playable characters, and Bendis has gone on record to state that Hawkeye would’ve joined the fray as well.

In 2012, THQ restructured their studios, possibly to try to salvage the company from an inevitable demise that came to pass in 2013. Of the first things to go were their licensed projects, as well as Blue Tongue. Though the world didn’t get to play that particular Avengers game based on the Secret Invasion story line, Ubisoft released Avengers: Battle for Earth on the Xbox 360 and Wii U that also took inspiration from that series.

The seventh console generation started in late 2005 when Microsoft brought the Xbox 360 to market, but the first game to ever show off what the new generation of hardware could do was EA’s Chicago studio when they released Fight Night Round 3. Wishing to challenge themselves with something beyond the boxing ring, the developer sought out to make a new Marvel fighting game after Nihilistic software’s Marvel Nemesis: Rise of the Imperfects released to poor reviews and sales.

EA Chicago had some incredibly ambitious ideas with this fighting game. The fighting arenas were to be set in public areas where the crowd could affect the ongoing battle. One example shown was the Hulk battling a character on a rooftop where the crane operator tries furiously to shake the behemoth off. The bold ideas were not limited to how the game would play, but how the combatants would appear as well. Dr. Doom, one of the most iconic villains in comic history, was said to resemble an actual tank.

The project was cancelled, but for numerous reasons surrounding the studio that had little to do with the Marvel fighting game, though EA Chicago was having difficulty translating their control stick fight mechanic to an arena with larger than life characters outside of a boxing ring. The studio had relocated to an expensive new office and another project they worked on, Def Jam: Icon failed to meet sales projections. The Fight Night franchise, once something they may have used to support the studio, was traded off to EA Canada such they could focus solely on the Marvel fighter. In the red with nothing to keep them afloat, the division closed in 2007.

We’re almost at an end of the series, return tomorrow for the last three remaining cancelled comic book games.