Whereas the first Disney Infinity game came with three different play sets in one package, this year model leaves it up to the player (or the parent of the player) to purchase the remaining two independently. One of the first out of the gate is the Spider-Man play set, inspired by the Disney animated series Ultimate Spider-Man, where Spider-Man is teamed up with a group of young S.H.I.E.L.D agents including Iron Fist and Nova, who are playable characters with one being included in the play set. The set is actually better than the one that comes in the box, but a few of the same problems still rear their head.

The Green Goblin along with his hired flunky Mysterio (WRITER’S NOTE: Mysterio figure, please!!!) have kidnapped Venom and cloned his symbiote to create an army to destroy S.H.I.E.L.D and take over New York City and the world. The story is pretty basic, and typical of the less than inspired tripe you find in the TV series, but it’s a decent enough set up to, you guessed it, punch a lot of symbiotes. 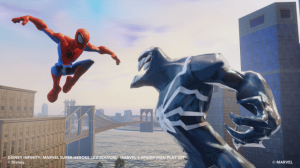 The environment in the Spider-Man play set is nearly identical to the Avengers, in that it’s an open world NYC playground, however not being taken over by Frost Giants, it’s a much nicer place to be in though still pretty cold and lifeless. The problems with traversing the environment are not an issue like they were in the Avengers play set: Spider-Man gets around by swinging, which is pretty forgiving not having to anchor your web line to anything but incredibly fun as always, and Nova who is the best flying character in the entire figure line so far with his human rocket power feeling especially powerful and nice to look at with the blue aura the surrounds him. Right off the bat you’re given a S.H.I.E.L.D car with flight capability so if you bought Iron Fist and Nick Fury, they don’t have to feel left out.

There’s a lot more levels included here than in the Avengers set where everything seemed to occur on the city streets. A lot unfortunately are made up of boring sewer environments, however there are some neat levels that make use of Mysterio’s particular skill set that I wish there was more of. Though the levels themselves are rather bland and pulled from the first chapter of the how-to-design-a-video-game handbook, they include a few platforming sequences and minimal puzzles based around getting batteries into power conduits. Nothing terribly advanced mind you, but a lot more engaging than the Avengers play set that comes in the starter pack. 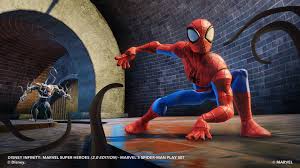 An interesting weapon you gain access to is the symbiote cannon that fires a wave of sonic energy. It’s so heavy that it has to be carried around with two hands above your characters head and it also provides a few clever challenges in the level where you have to get the weapon to a certain section of the map to complete an objective without the ability to fly or swing. Outside of the levels, the cannon is used in one of the challenge mini-games that are also more varied and fun than the basic motorcycle races and smash fests found in the included play set. You get some swinging challenges, wall-crawling events where you have to collect a certain amount of colored orbs, and a really cool Nova exclusive mission where you have to get civilians into a safe zone while trying to keep symbiote spawn from infecting them. 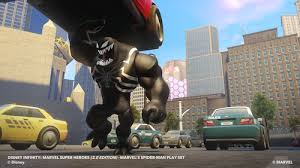 Quite possibly the stand out feature in the Spider-Man play set is the figures themselves, who are simply a lot more fun to use than the roster of the Avengers. Spider-Man and Venom have a lot of the same skills but Spider-Man is a lot more nimbler in his attacks than Venom who feels a lot heavier (this rings true for both his physical figure as well, which is easily the best in the lot so far.) Nova’s flying, as mentioned above, feels the better than either Iron Man or Thor, and his Nova blast projectiles and screen clearing super move once it’s unlocked are a must for crowd control and fighting enemies at a distance.

Nick Fury feels a little too much like Black Widow and is easily the figure you can do without, but one of the stand out figures in the lot who I do recommend buying is Iron Fist. This games combat was designed by Ninja Theory, those behind Heavenly Sword and DMC,  and you can really tell with Iron Fist. His martial arts fueled attacks feel extremely powerful and more than makes up for lack of a ranged attack. Also with a flying car being made available right up front, he doesn’t get left behind like Hawkeye, Captain America and Black Widow did. Of course if you only have the two figures from the play set, Spider-Man and Nova, you’ll have a blast irregardless, but if you have the means, buy Iron Fist and Venom.

If you’re a fan of open world Spider-Man games and want a little more actual game to play, $40 for the Spider-Man play set is a pretty decent investment. Both Nova and Spider-Man are great figures and despite the missions still leaning a bit too much on the action side like the Avengers, there’s at least some attempt at variety. If you’re not a fan of Spider-Man, well, you may not have gotten this deep into a review about a Spider-Man play set, and you may want to pass as the play set is only a few hours long, but if you include the two figures in the cost, it’s a pretty sweet deal.