Marvel has been throwing around a lot of popular event names as a lead up to the return to their Secret Wars story in 2015; Everything from Old Man Logan, Marvel Zombies, House of M, and of course Civil War. Yesterday they posted another teaser with no ties to a previous event, simply titled “The End” and accompanied by art of all the presently alive characters in the Ultimate Marvel Universe, hinting at the conclusion of the Ultimate line of comics. 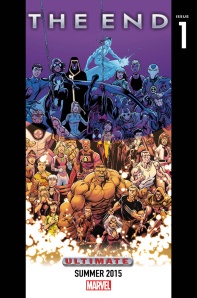 This comes at little surprise, as last year’s “Cataclysm” story line in which Galactus from the traditional Marvel Universe crossed over into the Ultimate Universe hinted at the death of the once proud brand. What would’ve been a tragic and interesting climax to the universe concluded with a relaunch of three series under the “Ultimate” banner: Miles Morales: Ultimate Spider-Man, Ultimate FF and All New Ultimates. One of those, Ultimate FF, was cancelled after a mere six issues, All New Ultimates will meet its end in January leaving Miles Morales the sole surviving Ultimate comic in regular rotation, a disappointing burn out to say the least.

While the Ultimate comic brand may not be what it once was, no can argue that in its possible fifteen year life span, should the teaser ring true, it was an incredibly important part of Marvel’s legacy. Back in the year 2000 when the line was started with Ultimate Spider-Man, Marvel was no where close to being the power house brand it would be today. The Spider-Man legacy was tarnished due to the convoluted “Clone Saga,” the movie business was in its infancy with just the first Blade and X-Men films and Marvel itself had just come out of Chapter 11 bankruptcy. To spring back from its misfortune, a bold decision was made to relaunch some of their most famous characters for a new millennium, free of decades of continuity that turned off most people from super hero comics. The gamble paid off big time, with Ultimate Spider-Man selling out immediately and kick-starting the careers of writer Brian Michael Bendis, who’s still writing Ultimate Spider-Man, and artist Mark Bagley among many others.

The broad appeal of Marvel’s new brand wasn’t just the fresh start and the low issue numbers, but in how it paid respect to the material it was taking its inspiration from. Peter Parker was still bitten by a spider, however it was altered genetically as opposed to being radioactive. Norman Osborn, the villainous Green Goblin, was morphed from a person into hulking green monster as opposed to being suited up in a green and purple costume. Even with these changes, all the characteristics that made them last for forty years still applied: The X-Men were still fighting for justice in a world that feared and despised them and Spider-Man was still a wise-cracking wall-crawler balancing his guilt over the death of his Uncle Ben against leading a normal life.

The power of the Ultimate universe wasn’t just felt in the comics world though, its influence is felt in the larger Marvel Universe as a whole. Nick Fury for example, once a cigar chomping, grey-haired white male was reimagined as a bald African-American inspired by Samuel L Jackson, who of course would go on to portray Nick Fury in the Marvel Cinematic Universe. That is easily the most well-known example, but if you look into story elements from your favorite Marvel films over the past decade, you’ll see how certain parts are cribbed from the Ultimate stories. Another arena that the “Ultimate” brand would influence would of course be video games.

The first real example would be the first X-Men: Legends game by Raven Software in 2004, and while not set in any particular timeline nor universe, its characters were clearly designed after the more uniform like costumes of the Ultimate X-Men line. When Raven moved on from the X-Men to the entire Marvel Universe with the first Marvel Ultimate Alliance, they used some of the Ultimate redesigns for the base characters, most noticeable Thor who nixed his cape and traditional Mjolnir for the Ultimate redesign that resembles a hammer-ax. 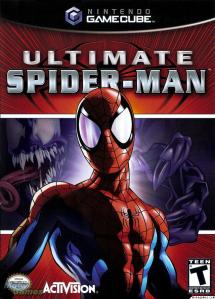 Perhaps the largest contribution the Ultimate Line made to video games was in 2005 with the release of Ultimate Spider-Man, the follow-up to the ground breaking Spider-Man 2 that also trail blazed in its own way. Ultimate Spider-Man was the first ever comic book game that took place within the continuity of an ongoing title (the game’s story was penned by Brian Micheal Bendis,) and featured the return of Eddie Brock/Venom who was presumed dead after his first appearance in the comics. Venom also returned as a playable character in a Spider-Man game for the first time since Maximum Carnage, and featured the classic white spider symbol on the character for the first time outside of a cover in the games conclusion. This game is notable as well for featuring the debut of the Ultimate Beetle and the first tease of the universe’s Sandman 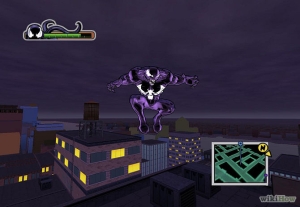 Ultimate Spider-Man never saw an official sequel, a shame really as stands as one of, and in my opinion, the greatest open-world Spider-Man game to date. The GC/PS2/Xbox weren’t the only systems Ultimate Spider-Man debuted on, however. There was also a version of the game developed for the Game Boy Advance, as well as the Nintendo DS. A game that can be considered an unofficial sequel of sorts to the handheld game that was also the only Spider-Man game released in 2006 was Spider-Man: Battle for New York that arrived also on the GBA and DS. Whereas the bullet point for Ultimate Spider-Man was the inclusion of Venom as a playable character, Battle for New York allowed players for the first time to play as Ultimate Green Goblin, more specifically, any version of the Green Goblin as part of a main story campaign. The Goblin had appeared in other Spider-Man games as a boss, but previously the only way to play as the character was in the first Spider-Man movie game as an unlockable bonus where the character under the mask is Harry Osborn (voiced by future Spider-Man, Josh Keaton.)

When it came time to combine multiple Spider-Men into one game for 2010’s Spider-Man: Shattered Dimensions from then first time series developer Beenox, Spider-Man from the Ultimate Universe was in the four character roster along with the original Spider-Man, Spider-Man 2099 and Spider-Man Noir. Even though Venom was nowhere to be seen, the Ultimate Universe’s Spider-Man was sporting the black symbiote costume. If you pay attention to Deadpool’s commentary in the second-tier stages in the game, you’ll pick up a lot of trivia such as Peter’s relationship with Kitty Pryde, how he swapped brains with Wolverine, as well as the identity of the Ultimate version of Spider-Woman, a product of that line’s own version of the clone saga.

What I’ll take away most from the introduction of the Ultimate Marvel line is how it allowed me a clean entry into Marvel comics in the early 2000’s after catching the comic bug having loved the X-Men and Spider-Man films. More recently I’ll remember it as the universe that brought to life one of my favorite Spider-Men of all time, Miles Morales, who I hope continues to exist in come capacity post closure, again should it conclude next year. I’ll also be eternally thankful for Ultimate Spider-Man, a game that despite being close to ten years old still stands as the single greatest open-world Spider-Man game today.

Here’s to the Ultimate Universe, though you may be ending, your stories and games will continue to live on.