Season passes have become quite an alarming trend in video games today with publishers requesting people pay money up front for things when they’re not even sure what they’ll get. Jumping on this trend for the first time is TT Games with Lego Batman 3: Beyond Gotham which allows you to purchase a Season Pass at a price of $14.99 on PS4, something that I can whole heartedly recommended buying with only half of the content being made available up front. While I obviously can’t review the entirety of what will be arriving in the future, I will touch on the three extra levels that are now up for download that are well worth the asking price even if nothing else was in the pipeline. 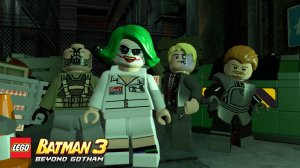 Previous Lego releases offered add-ons to the tune of additional characters that were often used as pre-order bonuses that eventually found themselves for purchase a short time later. The downloadable content as part of the Lego Batman 3: Beyond Gotham Season Pass not only brings a bunch of new characters to play as, but new levels that come complete with additional trophies. As far as the length of each of the stages go, they’re around the equivalent of the Deadpool red brick quests found in Lego Marvel Super Heroes, so about a few screens or so. Each can be replayed afterwards in freeplay mode to do things like collect mini-kit pieces and rescue Adam West.

Two of the three states right now are Batman themed: One following the chase scene featured in the Dark Knight and another involving a party that to celebrate Batman’s 75th anniversary that is crashed by Joker and his hench-wench, Harley Quinn, with the third being the opening of the Man of Steel where you take on the role of Jor-El who’s trying to jettison Kal-El to the planet earth. While there isn’t a dud in the bunch, my two favorite were the two that riffed the Dark Knight and Man of Steel, in particular the Man of Steel set that poked fun at Jor-El being played by Russell Crowe. These two stand out in that there’s been a few DC Lego games now, but not one that has ever been based on one of the many films that exist. The Lego games made a name for themselves last decade by spoofing the stories of Star Wars and Indiana Jones and it’s nice to see the DC films get roasted, in particular the extremely serious films from the mind of the Nolan’s.

A problem that has arisen with similarly distributed content is that it feels like it should have been included with the main game in the first place. Though these do feel a lot like the Deadpool missions that were a main part of the exploration portion of Lego Marvel Super Heroes, I don’t see how these would’ve fit in to the main game like those stages did. As the game is already so full of stuff to find, replay and collect, asking only $15 for a total of six new missions when they easily could have gotten away with the three they have now are a steal. This will also keep players coming back to the game long after they’ve gotten their platinum trophy or 1,000 gamer score.

If you’re a fan of the Lego games, there really is no reason not to go ahead and throw down the extra money on the season pass. As of right now you get three excellent extras and with the Arrow content on the way as well as two more pieces we have no idea about, the value is simply just too great to ignore.