After starring in the second highest grossing movie of 2014 (thus far,) the Guardians of the Galaxy can be seen just about anywhere nowadays, especially in video games. They starred in their first ever game, The Universal Weapon, this summer, they’re part of Disney Infinity 2.0, Marvel Heroes, the list goes on and on.

Soon to be added to that impressive resume is Marvel Puzzle Quest, which will receive a new update next week on the 26th that will bring the duo of Rocket Raccoon and Groot to the free-to-play expansion of the Puzzle Quest franchise. Another member of the team, the most dangerous woman in the galaxy, Gamora, will become available as a reward a few days later on December 1st. 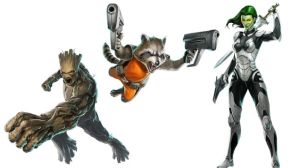