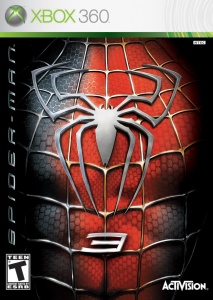 Like the last two Spider-Man movie games, Spider-Man 3 borrows story elements from the film of which it’s based on and pads it out with several other sub-plots involving familiar villains like The Lizard, The Rhino, The Scorpion and Kraven the Hunter. As bad as the story was in the movie though, it’s even worse here. The various plots share no connection between each other and the bits from the film featuring bad guys like New Goblin, Sandman, and Venom show up so rarely that you could almost forget this is a Spider-Man 3 movie game.

Once again Spider-Man 3’s biggest hook is its swinging and if you could judge a game on one section of it alone, this one would be a ten out of ten. Similar to Spider-Man 2 and Ultimate Spider-Man the crux of the game, and the area in which you’ll have the most fun, is swinging around a virtual New York City, shooting web-lines and anchoring them to nearby sky scrapers. Anyone who put hours into either of the two games I mentioned previously will have no time getting accustomed to the controls as the base mechanics are nearly identical: pull one trigger to launch a web-line, hit another at the base of your arch to pick up speed and charge the jump button to get more air.

It’s when this game starts forcing the player to do anything other than that when the frustration starts to set in. To progress the “story” you have to complete missions, and no matter who the villain of the missions is; a classic bad guy or a gothic-lolita gang member with a big hammer, you’ll be doing the same few activities over and over again: punching bad guys, protecting something, or diffusing bombs via a boring, impossible to lose, button-mashing video game.

Spider-Man 2 allowed you to purchase combos from an in-game store with accumulated points and that option is taken away here as the game will give you a new move after completing a mission. This is pretty pointless however as the best tactic is either mashing on the X or Y buttons until whoever you’re fighting isn’t standing anymore. The hits feel soft and unsatisfying and at certain points in the game I found myself getting frustrated beyond belief because I would furiously hit the attack button on generic goons who would be able to easily dodge my attacks. This was further exacerbated by the fact that I was wearing the alien costume that is supposed to make Spider-Man, already a pretty strong and fast guy, even STRONGER AND FASTER.

Don’t get use to seeing this outfit. It doesn’t stick around for long.

A selling point for this game and the movie was the inclusion of the black costume, but it’s introduced pretty late in the game and taken away just as fast. Outside of enhancing a few of your more powerful moves, you’ll never get the feeling that this suit is anything better than you’re standard red-and-blue classic tights. You can turn on the ability to play with the costume after you complete the story, but this is if you A) make it that far to begin with or B) actually want to play the game once the credits roll.

Levels fair no better than the poor combat, forcing you into cramped interiors where you’re robbed of the ability to swing around and the camera always points in the direction you don’t want it to go. Camera controls have never been a strong selling point in any of Activision’s game, going back as far Spider-Man on the PSOne that didn’t have any camera controls to speak of. That game gets a pass of sorts as developers were still getting used to 3-D game development, but such forgiveness can’t be given to this title as camera controls came a long way since the year 2000. A majority of the combat intensive stages take place in tight arenas where the already broken fighting mechanics are made even worse by losing track of whoever it is you’re trying to fight. Traversal, whether you’re climbing along a wall or trying to escape a dark burning building, fare no better.

Popularized by games like God of War and Resident Evil 4, quick-time events or QTE’s, starting showing up more and more in video games around this time and they’re used to such an excess in Spider-Man 3 that you never want to ever press a giant button “A” that pops up on your screen again. During levels you’ll randomly be thrown into one of such events with little to no warning only to find yourself dying and starting over again from the first button prompt if you’re lucky. This also applies to the game’s boss battles, who Treyarch decided that long, slowly depleting life meters are much, much more interesting than clever gimmicks and testing your developing skills. After finally wearing down a bosses health you’ll be forced to finish them off through a QTE, that would be okay perhaps it was a few button presses long, but they go on for over five or six button presses. Failure to complete these will grant a boss more health that you’ll have to whittle down and only to try your luck again. These timed events do have a positive element to them as you get to see some pretty fantastic Spider-Man acrobatics, but you never have a sense that you’re participating in anything, making you wonder why they just didn’t do input-less cut-scenes.

A reason why they tried to disguise in-game movies with giant buttons is the games graphics. Characters who have their faces hidden behind masks like Spider-Man and New Goblin look fine, but anyone else like a pre-Venom Eddie Brock and police woman Jean DeWolfe have scary bug eyes. New York City, where you’ll spend most of you time, looks the part but it doesn’t feel anymore impressive than what was in Spider-Man 2, or even the more beautiful Ultimate Spider-Man with its vibrant cel-shading. Overall this game didn’t scream “next-gen”, a particularly damming statement as it came out close to two years into the Xbox 360’s life-cycle.

An area in which Spider-Man 3 trumps the two games that came before it is that it doesn’t lock content behind having to compete side-missions or city events, and that’s a huge plus because you have the same few events carried over from Spider-Man 2 and Ultimate Spider-Man like races, combat tours where you have to fight bad guys and bomb tours where you race to defuse bombs. That all being said, Treyarch did managed to squeeze in a pointless event into the main missions, the dreaded “Mary Jane” events where you have to pick-up Mary Jane and swing around while she barks orders at you to go higher or faster, all the while some bored actress tries to sound excited.

Tobey Maguire had always provided the voice for Peter Parker/Spider-Man in the movie titles, but Spider-Man 3 got the majority of the cast minus Kirsten Dunst who is voiced by a sound alike. Maquire sounded pretty bored in the other games giving a flat delivery to very energetic character, but he deserves an Oscar for his performance when compared against his fellow cast mates. James Franco, voicing Harry Osborn/New Goblin, almost needs to be heard as he gives the phrase “phoned in” a bad name. The cast is not all bad though, J.K Simmons as J. Johah Jameson is fantastic as always and Bruce Campbell delivers a few laughs as the games tutorial narrator like he did in the first movie game and Spider-Man 2.

Spider-Man 3 is almost the perfect movie game in certain regards as much like the film it’s based on, it fails to build upon its much superior predecessor in any significant way. Swinging around as Spider-Man in an open-world NYC is great as always, but everything else from the terrible combat, awful voice acting and over abundance of QTE’s makes this one of the worst Spider-Man experiences to date. Today there’s much better games that do a lot of the same thing this game did only much better, and even when it was new there was already two good Spider-Man games that played identically and were actually fun. Spider-Man 3 had the potential to once again define how Spider-Man video games worked on a new piece of hardware, instead it placed the franchise on a downward slope only saved by Beenox’s Shattered Dimensions and Edge of Time, only to lose momentum again in another half-hearted Spider-Man movie game… 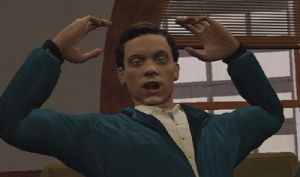 I don’t know how this came out either, Peter…